More than 2,600 incoming freshmen to participate in program designed to increase college success

More than 2,600 incoming freshmen to participate in program designed to increase college success

NevadaFIT, the University of Nevada, Reno's premiere academic preparation program for incoming freshmen students, begins its seventh year Saturday, Aug. 17, with a kick-off ceremony and parents' workshop. The program, which stands for "freshman intensive transition," gives freshmen a five-day crash course on the rigors of college academics. It spans all eight colleges and more than 40 majors across the University.

NevadaFIT began in 2013 as BioFIT, a program geared toward incoming biology majors, with 48 students participating. In 2014, the program was expanded to include 350 students in all eight colleges with varied majors, and last year had a little more than 1,600 participants. Each year, the program has grown in attendance and this year it will welcome the largest NevadaFIT class to date with approximately 2,700 students, about two-thirds of the incoming freshman class.

"College is not an extension of high school; it's not grade 13," Kevin Carman, executive vice president and provost for the University, said. "Students learn the value of going to class, sitting up front, how to study with other students and how to make effective use of resources like the writing and math centers."

Much of this growth is attributed to the College of Science, the initial college at the University to make the program mandatory for incoming students in 2016. This year, the College of Business and College of Engineering have joined a number of other colleges making the program mandatory for all students, and every major from every college can now participate. More students on campus earlier mean more logistics and planning, so LiberalArtsFIT hired a FIT coordinator for their program last year, and other camps are starting to follow that lead.

Typically presented to students in the sciences, NevadaFIT, modeled after Louisiana State University's BIOS program, is the first known intensive introduction that has moved beyond the sciences in the country. Although, true to its origins, the program remains anchored in mathematics. Students in most disciplines will attend daily math classes that relate to their field of study. This stems from research that has shown students who are successful in math are more likely to graduate within their chosen majors. 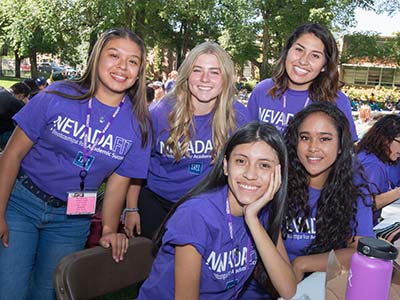 HealthFIT students gather for lunch on campus during the 2018 NevadaFIT week.

The program is open to all registered freshmen, regardless of grade-point average. This is the fourth year NevadaFIT has counted as a course credit. Participants are grouped in "packs" of seven students led by a peer mentor and many of these peer mentors have participated in past boot camps.

Course fees are used to pay student mentors and faculty, meals and other program expenses. Scholarships provided by private donors can be available to students who qualify.

"Thanks to the generosity of our donors, students who qualify have their full NevadaFIT attendance paid," Carman said. "We work hard to make sure any student who has financial need will be able to attend."

Every boot camp in last year's program saw higher GPAs in NevadaFIT participants compared to the students in their major who did not participate. NevadaFIT participants are also graduating at a higher rate in five years than the average University student does in six years, yielding a 67 percent, five-year graduation rate from the Fall 2013 cohort. The University's overall six-year graduation rate is 55 percent.

"Coming out of high school, I knew that psychology was something I wanted to pursue," University psychology and French major Taylor Chase said in a recently published NSights blog. "I had taken the AP class and knew that somewhere in the realms of research and the study of behavior, there was a place for me. Learning that PsychFIT (LiberalArtsFIT) gave me the chance to meet the department's faculty and start school a week early told me that NevadaFIT was something I had to do."

University freshmen and their families are encouraged to join the NevadaFIT conversations online by using the hashtag #NevadaFIT.