In addition to navigating pristine wild rivers and dirt roads, big-fish wrangler Zeb Hogan of Nat Geo WILD's "Monster Fish" show also had to navigate a maze of dangerous military zones in order to tell the story of his travel and research in the remote and wild Salween River that runs through China, Thailand and Myanmar.

Hogan, who hosts the show - now in its seventh season - has been on remote sections of the Amazon and the Nile and on every continent except Antarctica studying Monster Fish, freshwater fish that grow to at least six feet long and more than 200 pounds. He had heard reports of catfish the size of pickup trucks and fish species found nowhere else on Earth. How could he resist a trip to the Salween?

"This was my first trip into Myanmar," Hogan said. "It was unknown and potentially dangerous territory, a super remote stretch of river - wild, healthy river cut off from the outside world."

For Hogan, it was well worth it. It was his first time catching and handling a 5-foot-long 100-pound Giant Goonch catfish in wild, fast-flowing rapids. In all, he found a half-dozen species of monster fish, including pink-purple carps that grow to over 100 pounds and Great White Sheatfish, a type of powerful and aggressive catfish capable of making acrobatic leaps to capture prey. It was his first time fishing at night from a traditional Myanmarese 'floating house' and fishing with local bamboo poles and fish traps.

It was also his first time dealing with armed military to gain access to a river. 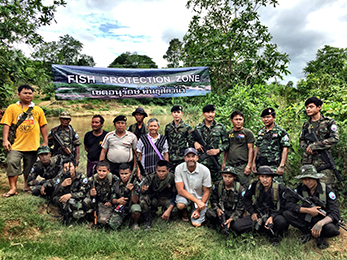 "This was especially tough because we had to negotiate with soldiers holding machine guns and rocket launchers," Hogan, an assistant professor and conservation biologist in the University's College of Science, said. "We worked with different factions to get access to sections of the Salween River that have been cut off from the outside world for almost 50 years due to conflict between the military and local ethnic groups. It's also a refuge for some of Asia's biggest fish. I was excited to hear about and hunt for some monsters in this wild and remote region, even though it was monsoon season."

A New Threat
The Salween is under a new threat. With hundreds of dams under construction in Asia, it's hard to find any major rivers left unscathed or undammed. The Salween is one of them.

Seven dams are proposed for the largely untouched river, which runs 1,750 miles from the Tibetan Plateau in China and empties into the Andaman Sea on the northern edge of the Indian Ocean, making it even more important for Hogan to study and to document the huge fish that inhabits the waters. From China, the Salween runs through Myanmar and along the border of Thailand.

The new season of the Nat Geo WILD series "Monster Fish with Zeb Hogan" premieres for 2018 with this episode, followed by five other new shows, packed with adventure.

On June 8, "Zeb Hogan Special: Monster Fish: Hammerhead Invasion" will air, with Hogan travelling to the Bahamas to solve some mysteries about the elusive and endangered Great Hammerhead shark, including why every November they show up en masse to the waters surrounding the tiny island of Bimini, home to some of the most shark-infested waters on Earth.

Facing new dangers, this time underwater and not from armed soldiers, Hogan scuba dives with sharks - without a cage - including the 12-foot long hammerhead, large bull sharks and a boat-sized tiger shark. In his latest adventure, to the Sea of Cortez off the coast of Baja California, Hogan finds, swims with and studies the world's largest fish, the Whale Shark. Whale sharks are not whales, and can reach lengths of 46 feet and can weigh up to 12 tons. On his journey, Hogan encounters thousands of jumping devil rays, massive whales, and endangered turtles before coming face-to-face with the giant fish.

A 10-hour marathon of previous shows begins at 10 a.m. on June 1, bringing binge-watching viewers on trips to the Nile, the Amazon, Laos and other regions around the world. The new episode begins at 9 p.m., June 1. The Whale Shark episode will air in November 2018 along with a special highlighting the importance of local experts and fishermen to Hogan's quest to find big fish. In the November show, he travels to the Sea of Cortez in search of the whale shark in hopes of uncovering the hidden secrets of the aquatic paradise. On his journey, he encounters thousands of jumping devil rays, massive whales, and endangered turtles before coming face-to-face with a giant.

Other shows include:
• "Monster Fish with Zeb Hogan: Notorious B.I.G's" on Friday, June 15 at 9 p.m. Hogan searches for monster fish with the worst reputations to find out if they live up to the bad hype. Electric eels of the Amazon are rumored to pack enough power to kill a human. Invasive snakeheads are known for ravaging native Florida fish species. Fierce-looking alligator gars are suspected to be gobbling up prized bait fish in Louisiana. The giant Goonch in India is even thought to have killed a person. He goes to the source to find out if these fish really are the monsters they seem.

• "Monster Fish with Zeb Hogan: Eating Machines" on Friday, June 22 at 9 p.m. In this episode, Hogan looks for big fish with killer appetites. Ravenous piranha, invasive flying carp and even a catfish that eats pigeons are eating their way to giant proportions.

This season is the 10-year anniversary of the show, which first aired on the National Geographic Channel and has aired on Nat Geo WILD for the past several years. Since the beginning, he has produced nearly 40 of the one-hour documentaries over seven seasons, many based on his research at the University.

"It's hard to believe we've been doing the show for 10 years," Hogan said. "The first show we did featured the world's largest freshwater fish, the Mekong giant catfish, and was based on my doctoral research in 2004; and we called it the Megafishes Project. The latest show on the world's largest fish - the whale shark - was just filmed this month."

Hogan has filmed in more than 30 countries on six continents, including on the "River of Doubt" a tributary to the Amazon in Brazil - which was explored by Theodore Roosevelt in the early 1900s, the Kenai River in Alaska, the Mekong River in Asia and the Murray-Darling River in Australia. His work encompasses 10 of Earth's most diverse freshwater ecosystems - ecological treasures - including World Heritage Sites, Ramsar Wetlands of International Importance and United Nations Environment Program Biodiversity Hotspots.

He also has established, and works to establish, conservation programs in the areas he studies to help protect the fish. For example, partly as a result of Hogan's work with the governments of Cambodia, Thailand, and Laos, capture of the Mekong giant catfish is now restricted in those countries. He's also helped communities in the United States create conservation programs to help protect fish habitat.

The show, televised in North America, Asia and Europe, offers a mix of science, adventure and exploration around the world.

Hogan has been on faculty at the University of Nevada, Reno since 2006 and is an assistant research professor in the University's College of Science, part of the Aquatic Ecosystems Analysis Laboratory in the Biology Department and a member of the University's Global Water Center. He is a National Geographic Explorer and was named a National Geographic Fellow in 2011. He was a visiting Fulbright scholar at the Environmental Risk Assessment Program at Thailand's Chiang Mai University, has served as a World Wildlife Fund senior freshwater fellow and is the United Nations Convention on Migratory Species Councilor for Fish.