Sarah Blithe, an associate professor of communication studies in the College of Liberal Arts at the University of Nevada, Reno, checked her email on her phone while at the Virginia City Camel Races event years ago and read a new call for research about "hidden organizations" put out by Management Communication Quarterly. After reading the email, she heard the announcer at the event make lewd comments about the riders. She realized that they were legal prostitutes sponsored by brothels to ride camels. In that moment, Blithe thought about brothels as a "hidden organization," which led her to ask her friend and fellow organizational communication scholar, Anna Wolfe, to research legal prostitution in Nevada with her for the research journal. The research did not stop after Blithe and Wolfe published their findings in Management Communication Quarterly.

"In certain areas of Nevada, sex work is a legal occupation," Blithe said. "Our research assumes this and isn't about morality; it is not pro- or anti- prostitution."

Blithe has spent the past five years researching the stigma - or negative mindset - and secrecy of sex work, interviewing current and former sex workers, madams, local police and brothel owners.

She said she was shocked to learn of the death of Dennis Hof, one of the state's most well-known brothel owners and 2018 Nevada State Assembly candidate. The 72-year-old Hof was found dead on Tuesday at one his brothels, the Love Ranch, just north of Pahrump, Nevada.

"Dennis was an integral figure in shaping brothel laws and practices," Blithe said. "It will be interesting to see the structural shifts that occur in the industry in his absence." 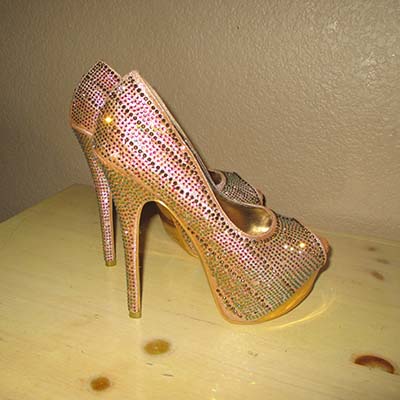 Shoes worn by a Nevada prostitute in one of the state’s legal brothels. Photo taken by Priscilla Varner, University of Nevada, Reno MFA graduate, who photographed images for her school project and for the upcoming book, Sex and Stigma: Stories of Everyday Life in Nevada’s Legal Brothels.Blithe's research looked at Nevada law, brothel policies - like some that enforce "lockdown" hours - and other oppressive and unfair labor practices. Blithe claims that brothel owners can often receive political favors and can garner a lot of publicity - whereas the women carry the brunt of the stigma.

"The women are independent contractors; they [the brothel owners] can't tell them when and where the women are allowed to go," Blithe said. "But (the brothel owners) seem to get away with oppressive-like policies due to historical inequities within legal prostitution."

Blithe has created a class at the University based on her research, and will be releasing a co-authored book Sex and Stigma: Stories of Everyday Life in Nevada's Legal Brothels in December with New York University Press. Her co-authors include Wolfe of Texas A&M University and Breanna Mohr, a University graduate student and legal prostitute.

Many of the women interviewed, Blithe said, love their jobs. A lot of them are mothers who balance work-life and parenting, in addition to the emotional labor of their jobs. According to Blithe, their work is often very little about sex, but more about marketing and dealing with people who just want to talk. From her research, Blithe has discovered they are not so different from women in other organizations, but they do face discrimination because of the social stigmas often associated with sex work.

"We would never lock doctors in hospitals because they could be potentially exposed to diseases," Blithe said recounting the inequity of "lockdown" policies.

Blithe suggests that there is an urgency of stigma management practices in sex work and claims that brothels need to be reformed.

"I've been very inspired by the women I've met," Blithe said. "They're hard-working women who have all of these constraints seeped in moral stigma, which many times makes them feel inferior."

The book has methodologically innovative aspects including qualitative social sciences and autobiographic accounts from sex workers. The women reflect on their struggles to engage in their communities, conduct business, maintain personal relationships, and transition out of the industry.

"As authors of the book, we wanted to privilege the voice of sex workers," Blithe said. "One of my co-authors is a sex worker; she was really able to change the direction of the book."

Blithe's University course focuses specifically on stigma as a special problem in speech communication. Her class has taken a field trip to a brothel and hosted a panel of legal sex workers.

Blithe has produced research that contributes to social justice. She has received numerous awards such as the Nevada System of Higher Education Regents' 2017 Rising Researcher Award and the Mousel Feltner Award for Outstanding Research from the College of Liberal Arts. She has also received two Outstanding Book Awards: the first from the Organization for the Study of Communication, Language and Gender; the second from the National Communication Association's Organizational Communication Division, for her book, Gender Equality and Work-Life Balance: Glass handcuffs and working men in the U.S. Her book Sex and Stigma: Stories of Everyday Life in Nevada's Legal Brothels is available for presale through New York University Press.