Seed-grants support creative, interdisciplinary research such as effort to explain why smell plays such a key role in life

Seed-grants support creative, interdisciplinary research such as effort to explain why smell plays such a key role in life

After receiving a $2,500 New Scholarly Endeavor seed grant, awarded through Research & Innovation at the University of Nevada, Reno, faculty members Dennis Mathew and Benjamin Young began to conduct research on the biophilosophy of smell.

Mathew, a neurobiologist and assistant professor of biology in the College of Science, aims to answer a key question in neuroscience through this interdisciplinary research: How is a sensory input translated by neural circuits in the brain into a behavioral output?

"Using the numerically simple olfactory circuit of the fruit fly larva, and a very controllable set of odor (chemical) inputs, I'm trying to figure out how circuit neurons talk to each other and convert one set of information (odor in the environment) into another set of information (behavior response to the odor," he said.

Young, assistant professor of philosophy in the College of Liberal Arts who works in empirically informed philosophy with a primary interest in consciousness and olfaction, teamed up with Mathew to better understand the connection between what we smell and what the odor object is.

"I have a particular theory in play that what we smell is something about the molecular structure within chemical plumes," he said. "I work on the theoretical issue of why chemicals smell as they do, while Dennis is working at the molecular level of odor receptors and at the cellular level of neural circuitry."

Their work consists of developing their rather novel theory that the composition and properties of odor plumes might explain how we smell.

"This kind of research has a lot of implications both for human health and society," Mathew said. "We know a lot about how the receptors and smell neurons are organized, yet we have a limited understanding of how smell is perceived and how an organism uses its neural circuitry to discriminate between two different smells."

The New Scholarly Endeavor grants are one of two seed-grants programs available through Research & Innovation, the other one is the mICRo grants program. A range of projects representing collaborations between the sciences, engineering, arts and humanities are selected every semester after an application cycle ends. 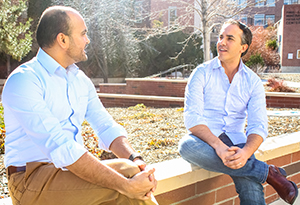 The research being conducted and funded by the University on fruit flies will help not only agriculture and pest control, but will help explain why smells are perceived differently even if they have similar chemical and molecular properties.

"These grants are meant to encourage professors from different disciplines to come together, not only to collaborate on experiments, but also to write proposals to funding agencies to bring forward these new perspectives and ideas," Mathew said. "All research begins with an idea."

Both researchers stressed the importance of acting upon new ideas and collaborating with colleagues from other disciplines. While the two may have collaborated even without the funding opportunity, it has "sped up" their collaboration and allowed them to fund student research assistants.

"One of the most exciting bits is where you get this itch of an idea and then you immerse yourself in the literature," Young said. "Then when you come up with an idea that you can actually test, you realize you can actually do something with this itch. Whether you are right or wrong, there's now something that is a deciding factor. That's the fun bit for me."

The current application cycle for NSE and mICRo grants is open with a close date of April 3, 2017. Learn more about our mICRo and NSE seed grants, along with other internal awards and funding opportunities offered through Research & Innovation.