"We just arrived in Kamchatka and for the next two and a half weeks we will work on Shiveluch and Klyuchevskoy, two currently erupting volcanoes."

I received the short note in September from Philipp Ruprecht, a new geology assistant professor in the College of Science. For the sake of science, he travelled to the northern Russian peninsula at the intersection of the Bering Sea and North Pacific Ocean, just east of the Aleutian Islands - home to the most productive volcanoes on the planet.

Ruprecht, accompanied by his post-doctoral student Maxim Gavrilenko, had travelled for 3 days, with three long distance flights heading east, to get to P-K - short for Petropavlosk-Kamchatskiy - the main and largest populated hub of the region with 200,000 residents, mostly in support of the nearby military base. 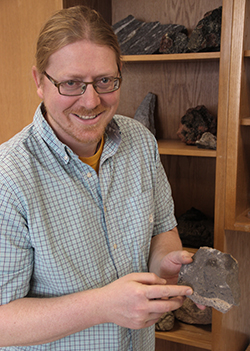 Below them, miles below, was the source of their studies, where two tectonic plates intersect almost at right angles and are colliding while at the same time the pacific plate is subducting underneath both. The slow motion collision creates the most spectacular arc of volcanoes on earth, which spew ash and lava high into the atmosphere and send magma flowing on the surface at speeds from 50 to 100 mph. The volcanoes are considered dangerous and unpredictable, with relatively constant eruptions. Ruprecht and his colleagues saw seven eruptions in two days.

The KVERT volcano alert website cautions that for the Shiveluch volcano, "potential hazards are associated with explosive volcanic eruptions of ash clouds, ash falls, pyroclastic flows, hot avalanches and lahars. The volcano poses a potential danger for international and local airlines passing in the area of ​​Kamchatka, because the height of its ash emissions can reach (two to 12 miles) above sea level, ash clouds can stretch for hundreds of kilometers from the volcano in various directions."

"These are the dangerous part of this volcano," he said. "They are hard to predict, extremely fast, and cover immense distances. Large parts of the southern sector of Shiveluch are covered by pyroclastic flow deposits that originated since 2005." 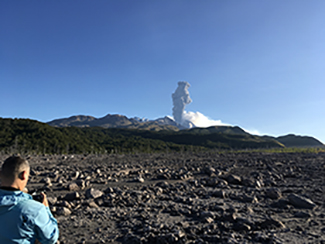 First eruption the team saw of Shiveluch. Plan was to hike to peak to left of the eruption column. They abandoned that idea.

Knowing this didn't deter Ruprecht, a geologist and geoscientist at heart - this is where some of the best rocks can be found to explain what's happening under the surface of the earth. He's been interested in rocks and volcanoes since his undergraduate and graduate studies in Germany and studying volcanoes for his post-doctoral studies at Columbia University's Lamont-Doherty Earth Observatory and at the University of Washington where he earned his doctorate, before coming to the University of Nevada, Reno where he works in the Department of Geological Sciences and Engineering.

Gathering old rocks from new eruptions
Specifically, he is interested in the geochemistry of the magmas that are produced underneath volcanoes and in the processes that gets recorded in the crystals as magmas partially cool. But he was in Kamchatka to gather rocks to get after those broader goals.

"There are lots of samples available from the most recent eruptions at these volcanoes (especially in 2005 and 2010 at Shiveluch), and we collected blobs of rock that represent the deeper history of the volcano," Ruprecht said. "With the network of plates colliding and subducting we see a unique signature of large amounts of water possibly added to the magma during the subduction process.

"We're studying the role of water in subduction systems and how it affects explosive behavior and magma evolution. Because of the edge at the northern end of the plate, we can get a good picture of how wet it is, how much water the magma encounters on the way to the surface and the geochemical cycling that occurs."

He can tell all that by studying the rocks; the right kind of rocks that required not just tiring plane rides, but a 300-mile drive north through the forests from P-K across the remote Russian peninsula to get near the two volcanoes in the Central Kamchatka Depression, with Shiveluch looming in the north and Klyuchevskoy to the south. 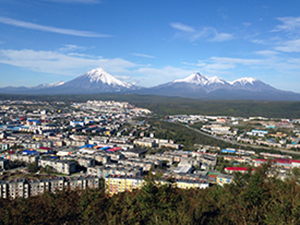 "We took the 10-hour drive on dirt roads, up dry riverbeds and on top of recent lava deposits - from a 2005 eruption - to the study area at the foot of the volcano," he said. "We camped three nights on the old pyroclastic flows. Fortunately we had sunny skies, not the rainy and cold that everyone had warned us about."

The team, including a cook and support crew, spent one day at Klyuchevskoy and four days at Shiveluch.

"Out of the three weeks we had five days in the field, and we made the most of it, we got a lot done," he said. "It was a fair amount of traveling and logistics, and it was worth it. Max has been studying the geology here for several years, and he really made this happen, from knowing the language to all the nuances of regulations, access to the area and collaborating with other scientists. He was essential to the project."

Ruprecht worked with members of the Russian Academy of Science's Institute of Volcanology and Seismology in Petropavlosk-Kamchatskiy, primarily with their colleague Natasha Gorbach, during the research trip. He was also joined by a couple of other scientists for the trip to the devastated volcanic landscapes, including his colleague from Washington University in St. Louis, Michael Krawczynski.

"Our main colleague from Russia, Natasha, is one of the few who has studied Shiveluch and is considered the world's expert on this volcano. Max, who is quite knowledgeable of Klyuchevskoy, was our lead there," he said. "There aren't many people out looking at these volcanoes, mostly Russians, not many foreigners. It's spectacular, remote terrain with interesting geology that's happening right in front of you - even though they're considered among the most dangerous volcanoes."

Seven volcanic eruptions
My next email from Philipp: "This was the first eruption we saw about a week ago!" was accompanied by a photo of a 30,000 foot high plume of ash coming from Shiveluch about 20 miles away. In all, they saw seven eruptions from the two volcanoes in two days.

"We were fortunate to see them all," he said. "The volcano, the largest arc volcano in the world, goes from close to sea level to 15,000 feet high in less than 10 miles, so it was easy to see; but standing on an old pyroclastic flow makes you stop and think. A half-hour later the other one erupts, it was relatively small. Natasha told us how, in 2013, she watched nervously as a pyroclastic flow advanced towards her just running out of energy in front of her."

The typical eruption style for the Klyuchevskoy volcano is described as dominantly explosive and at present in a phase of near-persistent and ongoing activity.

The team even saw two eruptions at night.

"We were setting up a camera to photograph the stars, so the cameras were already set up, and then the volcano goes off, with lightning flashing all around the crater. It was fantastic." 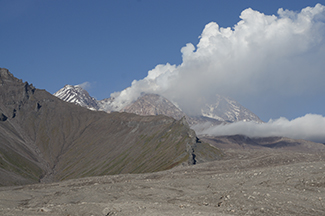 Eruptions the team saw were coming off the steaming area behind the hot dome.

Ruprecht doesn't always get treated to a fireworks display such as that when he's out in the field. Last winter he trekked on horseback and on foot through the Southern Volcanic Andean Zone with a graduate student and colleagues for several weeks of valuable field work.

He is set for another trip to Chile for most of January, but without students. He will join a group of scientists to study volcanoes there, focusing in greater detail on new aspects of his main field area. He's quite familiar with Chile, it's been one of his areas of studies since his dissertation as a graduate student where he focused on the historic eruptions in 1846 and 1932 of Volcan Quizapu in Chile, the latter being the largest historic eruption in Chile that brought ash across the entire Atlantic even to the shores of South Africa.

While most of his focus has been on Andean volcanoes through the years, Ruprecht has worked in volcanic areas in the entire Americas as well as the Western Pacific and European volcanoes, including arcs in the Andes, Central America, Aleutians, Tonga and the tectonically complex area of Eastern Papua New Guinea.

"I'm interested in how diverse the mantel is in subduction zones," he said. "It's thought to be uniform, but I'm looking for more diversity in rocks by examining how water reacts with the mantle, how it changes its viscosity and the pathway to crystallization. There are great implications for what happens from the mantle to the surface."

In all, Ruprecht and his post-doctoral student Gavrilenko collected 110 pounds of rock from Kamchatka for analysis to help them find answers to their research questions.

"My favorite things to do besides working on volcanoes and the rocks that they bring to the surface is traveling and getting out into nature," he said. "Ultimately, I want to get people excited about rocks and how they tell the story of an evolving planet."