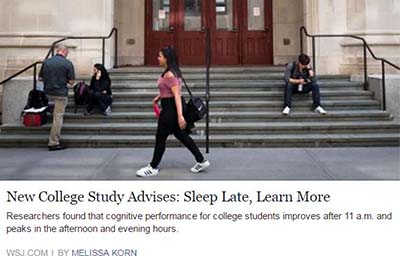 A new cognitive research study used two new approaches to determine ranges of start times that optimize functioning for undergraduate students. Based on a sample of first and second year university students, the University of Nevada, Reno and The Open University in the United Kingdom used a survey-based, empirical model and a neuroscience-based, theoretical model to analyse the learning patterns of each student to determine optimum times when cognitive performance can be expected to be at its peak.

"The basic thrust is that the best times of day for learning for college-age students are later than standard class hours begin," Mariah Evans, professor of sociology at the University of Nevada, Reno and co-author of the study, said. "Especially for freshmen and sophomores, we should be running more afternoon and evening classes as part of the standard curriculum."

Prior research has demonstrated that late starts are optimal for most high school students, and this study extends that analysis to freshmen and sophomores in college. The analysis by Evans, Jonathan Kelley, fellow University sociology professor, and Paul Kelley, honorary associate of sleep, circadian and memory neuroscience at The Open University, assessed the preferred sleeping times of the participants and asked them to rate their fitness for cognitive activities in each hour of the 24-hour day.

"Neuroscientists have documented the time shift using biological data - on average, teens' biologically ‘natural' day begins about two hours later than is optimal for prime age adults," Evans said. "The survey we present here support that for college students, but they also show that when it comes to optimal performance, no one time fits all."

The best time to study

The study showed that much later starting times of after 11 a.m. or noon, result in the best learning. It also revealed that those who saw themselves as "evening" people outnumbered the "morning" people by 2:1, and it concluded that every start time disadvantages one or more of the chronotypes (propensity for the individual to be alert and cognitively active at a particular time during a 24-hour period).

"Thus, the science supports recent moves by the University to encourage evening classes as part of the standard undergraduate curriculum," Evans said. "It also supports increasing the availability of asynchronous online classes to enable students to align their academic work times with their optimal learning times."

"This raises the question as to why conventional universities start their lectures at 9 a.m. or even earlier when our research reveals that this limits the performance of their students," Kelley said. "This work is very helpful for asynchronous online learning as it allows for the student to target their study time to align with their personal rhythm and at the time of day when they know they are most effective."