The Optimism Series: How to remain optimistic in the age of climate change

May 09, 2022
By: Christopher Barile, Ph.D.
Assistant Professor in the Department of Chemistry

In honor of Mental Health Awareness Month, the College of Science has asked researchers across a range of disciplines to share how they remain optimistic in the face of the many challenges of today, particularly within the field of science.

When future historians look back on this century, they will write that climate change was the defining challenge of our times. Rapidly worsening environmental and economic consequences caused by a 2°F human-induced global temperature rise ensure that this chapter in our species’ story could be called “The Age of Climate Change.” The beginning of this chapter would describe how in burning fossil fuels, we unwittingly launched the world’s largest uncontrolled scientific experiment and that the resulting erratic climate caused increased global conflict and an alarming loss of biodiversity. The authors would lament that even though we undoubtedly knew the origins of climate change and that scientists and politicians offered many promising solutions, we were slow to act and tragically myopic in our vision, flippantly disregarding the lives of our grandchildren.

Good stories start with tension and conflict. By that metric, we have an incredible story in the making that is brimming with conflict of unprecedented magnitude. The rest is for us to decide. How will this chapter of the human story reach resolution?

I am optimistic that “The Age of Climate Change” will end positively. I am hopeful that we will completely transition to clean and renewable energy sources, and that fossil fuel combustion will soon be as antiquated as rotary phones. I am encouraged that as we work together to solve this international problem that affects us all, we will become more united as a species. At UNR, I know that there are climate change heroes in the making who are learning, researching, and politicking in our classrooms, laboratories, and communities.

Even in the specter of climate change, there are many reasons to be optimistic. The adoption of clean and renewable energy sources has progressed much more quickly than most people expected. On the energy production front, amazing scientific progress has been made. Solar panels and wind turbines are now efficient enough to form the backbone of a climate change solution. The use of coal, the dirtiest fossil fuel, is rapidly dwindling in many parts of the world. More than forty countries recently pledged to phase out coal entirely in the coming decades, though notably not the United States, China, or India.

Since the Industrial Revolution, our increased quality of life has been inexorably linked to rising energy consumption. Surprisingly though, this trend has broken in the last fifty years, during which time global per capita energy consumption has remained nearly constant despite an undeniable rise in the global standard of living. We can thank an increase in the energy efficiency of appliances, lighting, electronic devices, and building infrastructure for this positive development. As with the triumphs of renewable energy production, incredible scientific and technological advances such as the light-emitting diode and the semiconductor revolution form the foundation of energy efficiency improvements.

However, science alone cannot halt climate change. To overcome such a large, multifaceted problem, there must be both economic and political reform as well. In the case of increased energy efficiency, the economic motivation is intrinsic. Nobody likes paying higher electricity bills. Furthermore, it is no coincidence that the rise of energy efficiency corresponded with the growth of the modern environmental movement in the 1960s and 1970s.

With science, activism, and economics as three drivers, we will be able to come out of this climate crisis a stronger and more united people. As a citizen, I am thrilled by a second wave of environmentalism spearheaded by youth activists around the world galvanized by climate change. Renewable sources of energy are cheaper than fossil fuels in many situations, and they will continue to become more affordable as economies of scale play out. Surely, on both the political and economic fronts, there is much more to be done, and there are many hardworking individuals at UNR doing just that.

As a scientist, I can tell you that, despite many advances, there are still several key pieces of technology that must be developed in order for us to transition completely to renewable energy. Perhaps most importantly, we do not have a reliable and cost-effective way of storing intermittent renewable energy on the power grid. Until this problem is solved, the power grid cannot handle significantly greater renewable energy adoption. Another large problem is that many our most carbon-intensive activities currently cannot be electrified. Batteries are too heavy to power air travel, the most carbon-intensive mode of transportation. Industrial processes such as cement, glass, steel, and fertilizer production are responsible for a large share of carbon emissions and cannot be electrified in any straightforward way.

Fortunately, some of the most fascinating and groundbreaking work in all of science occurring right now relates to these renewable energy problems. Recently developed flow batteries, which can be thought of as a combination of fuel cells and rechargeable batteries, may allow us to store large amounts of energy on the grid. Several new battery chemistries have theoretical energy densities that rival those of jet fuels, making electric airplanes plausible. Room-temperature energy-efficient electrochemical methods are being discovered that might replace high-temperature industrial reactions. There is still room to increase the energy efficiency of our homes and offices through new technological advances such as dynamic windows with electronically switchable transparency. Scientists are also making strides at taking carbon dioxide, the primary greenhouse gas, out of the air and converting it to fuels and other useful products. My students and I are pursuing these last two projects in our laboratory in the Department of Chemistry.

For all of these reasons, we can be optimistic that science and technology will get us where we need to be in the coming years to avoid the most harmful societal and ecological impacts of climate change. The greatest danger lies not in a lack of scientific output, but in our civil discourse. Moving forward, we must be careful not to undermine the progress we have made with factionalism and diversions, or worse, explicit disinformation campaigns. Although conservation is undoubtedly important, we need to carefully assess tradeoffs, and there is no going back to some “pristine” state. We are eight billion people, and we have irrevocably changed our planet through geoengineering. The reasonable path forward is to be thoughtful, hopeful, and rational about how we geoengineer it in the future. We get to decide how the climate change chapter of the human saga ends.

Christopher Barile is an Assistant Professor in the Department of Chemistry using electrochemistry, inorganic chemistry, and materials chemistry in the fight against climate change. Barile's development of a smart-window tinted-glass technology has gained national attention for its energy-saving abilities, and he continues to explore potential applications of the dynamic film used in his smart window technology. Currently, Barile’s lab is exploring chemical reactions central to renewable energy and environmental technologies and aims to develop processes for recycling carbon dioxide and nitrogen in the atmosphere. 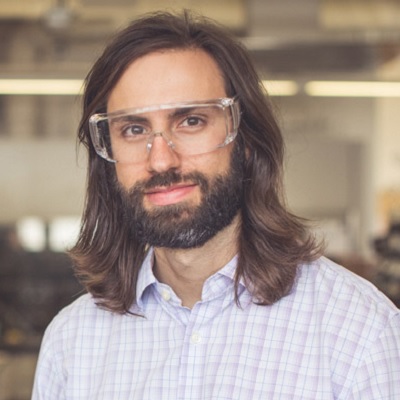 By: Christopher Barile, Ph.D.
Assistant Professor in the Department of Chemistry

Assistant Professor in the Department of Geography Adam Csank provides some advice to find hope in the face of climate change.

Looking ahead: planning & prepping for Commencement