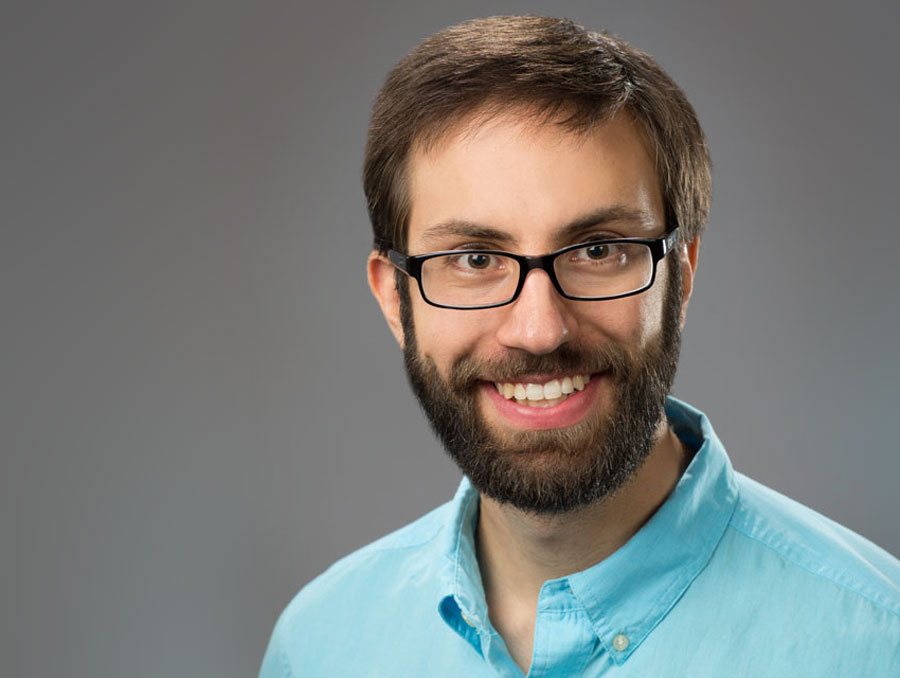 Christopher Barile, Assistant Professor in the Department of Chemistry, has received the University of Nevada, Reno Foundation Early Career Innovator Award. Barile's development of a smart-window tinted-glass technology has gained national attention for its energy-saving abilities. Barile remains focused on environmentally conscious research, and he continues to explore potential applications of the dynamic film used in his smart window technology. Below he answers a few questions about how his research and how he hopes to use chemistry to fight climate change.

Can you describe your research?

Research in our laboratory addresses problems associated with energy conversion, storage, and efficiency at the intersection of electrochemistry, inorganic chemistry, and materials chemistry. Currently, most of our research focuses on two technologies: electrocatalysis and dynamic films.  Electrocatalysis, or the speeding up of electrically-driven reactions, is central to many green energy conversion processes such as those that occur in fuel cells or in the remediation of carbon dioxide. (You can learn more about the Barile group’s catalysis research here.)

The second project uses dynamic films to create devices that have electronically switchable optical properties. Although there are many potential applications of dynamic films, we are most interested in using them to create smart windows. The transparency of these windows can be adjusted electronically through a user interface or automated with sensors. By replacing regular windows with smart windows, the energy efficiency of buildings can be dramatically increased by more appropriately managing the flow of light and heat. In the summer, the windows in their dark state would reject heat, and in the winter, the windows would keep heat in the building. In this way, buildings with these windows would minimize heating and cooling costs. In fact, the total energy consumption of buildings with smart windows would decrease by an average of 20%. That is a huge energy savings potential for one technology considering that buildings are responsible for about 40% of energy consumption in the U.S.

Current smart windows, however, are not widely commercialized due to problems associated with durability, scalability, and high cost. Our laboratory has developed a new way to design these windows based on the reversible electrodeposition of metals that promises to overcome these challenges.

What inspired you to pursue this research?

I am deeply concerned about climate change and our reliance of fossil fuels. There is a good chance future historians will view climate change as the defining humanitarian issue of the 21st century. While it is exciting to see more solar panels on homes and electric cars on the road, fully addressing climate change is an enormous problem that requires a multifaceted solution. Contrary to what some believe, the problem is not just an issue of a lack of political will or market adoption. Unfortunately, there are still large gaps in necessary scientific and technological development.

When I was in high school, there was still some hope that if we acted aggressively enough, we could limit carbon dioxide levels in the Earth’s atmosphere to a manageable level. Most climate scientists now agree that at well above 400 ppm carbon dioxide, we are past the point of no return. That means we have to develop ways to actively remove carbon dioxide from the atmosphere, not just curtail future emissions.

When I was in high school, there was still some hope that if we acted aggressively enough, we could limit carbon dioxide levels in the Earth’s atmosphere to a manageable level. Most climate scientists now agree that at well above 400 ppm carbon dioxide, we are past the point of no return. That means we have to develop ways to actively remove carbon dioxide from the atmosphere, not just curtail future emissions. I am excited that our laboratory is working on new catalysts that can convert carbon dioxide to useful fuels. If successful, this research could result in technologies that allow us to negate our deleterious greenhouse gas emissions and achieve a future with a more stable climate.

Energy efficiency is a piece of the puzzle that is underappreciated, perhaps because many researchers and customers find energy storage and generation more exciting than developing or installing more efficient devices. Only the most passionate among us are jazzed to install new weatherstripping on our doors or to replace our incandescent light bulbs. The smart window project is fantastic because it brings the same level of enthusiasm someone might have for a flashy electric car to the energy efficiency space. Consumers will want fancy windows that improve their workplace experience or their home value in addition to reducing their energy bill.

What does this award mean to you and for your work?

With all of the outstanding research conducted across the University by early career faculty, I am humbled to receive this award. The existence of this award is a great testament to the University’s concerted effort to value both fundamental and applied research. Even more so though, this award is reflective of the hard work performed by my students. I am very proud of them and receive great joy in helping them grow as scientists and leaders.

What impact on society do you hope to achieve through your work?

There are thousands of different problems that I could research as a chemist. For me, I find it most exciting to focus on the problems I believe will have the biggest impact on society if I am successful in solving them. I hope that our research will lead to the widespread commercialization of energy-efficient smart windows and the implementation of devices that can negate greenhouse gas emissions.

What future plans do you have for your scholarly work/research?

There are many ideas I would like to pursue, both in research and pedagogy. These projects range from the very pragmatic to the very esoteric to the possibly impossible. The hardest question is how to prioritize them all!