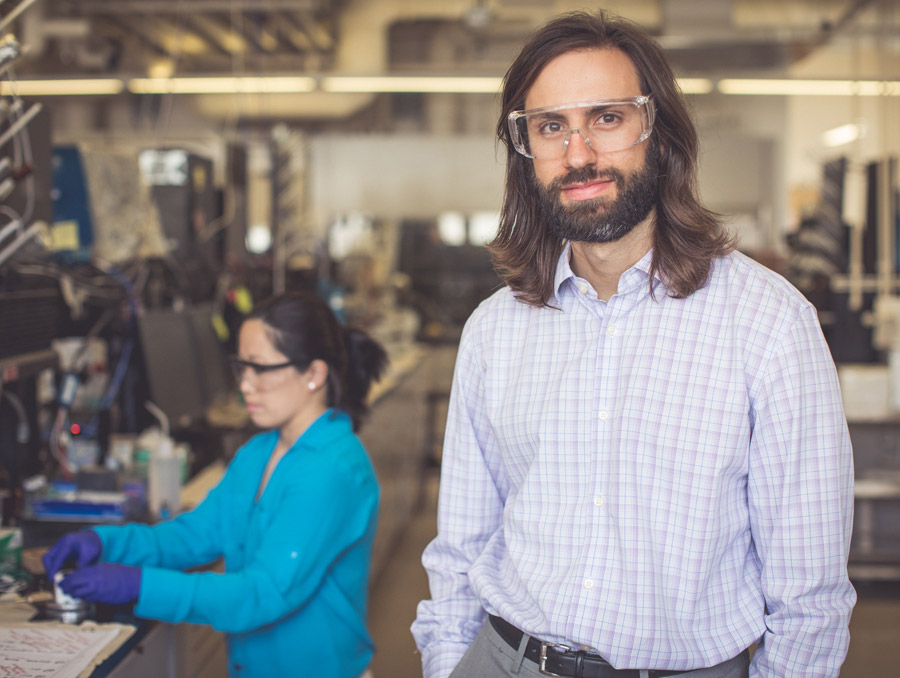 Making useful fuel out of thin air promises to reduce the amount of carbon dioxide in our atmosphere, and chemist and assistant professor Christopher Barile is on a path to make that happen.

Barile is deeply concerned about climate change and societies' reliance on fossil fuels. Climate change is a chemical problem—burning fossil fuels such as coal, oil or natural gas produces carbon dioxide, or CO2. The CO2 molecule is extremely effective at capturing energy in the form of heat and warming our atmosphere.

Although plants are effective at reducing CO2 into sugars, they cannot compensate for the massive scale of CO2 introduced since the Industrial Revolution. Along with ecologists, conservation biologists and many other colleagues of Barile in the College of Science, chemists have been studying this problem for decades and are ready to take on the challenge.

“Taking CO2 out of the air is totally game changing—it could be 20 years away, but it could be what saves the planet.”

“There is a good chance future historians will view climate change as the defining humanitarian issue of the 21st century,” Barile said. “While it is exciting to see more solar panels on homes and electric cars on the road, fully addressing climate change is an enormous problem that requires a multifaceted solution. Contrary to what some believe, the problem is not just an issue of a lack of political will or market adoption. Unfortunately, there are still large gaps in necessary scientific and technological development.”

Research in Barile’s laboratory addresses problems associated with energy conversion, storage, and efficiency at the intersection of electrochemistry, inorganic chemistry and materials chemistry. Right now, his lab's focus is on electrocatalysis. Electrocatalysis, or altering the rate of electrically-driven reactions, is central to many green energy conversion processes such as those that occur in fuel cells or in the remediation of carbon dioxide.

“When I was in high school, there was still some hope that if we acted aggressively enough, we could limit carbon dioxide levels in the Earth’s atmosphere to a manageable level,” he said. “Most climate scientists now agree that at well above 400 ppm carbon dioxide, we are past the point of no return. That means we have to develop ways to actively remove carbon dioxide from the atmosphere, not just curtail future emissions.”

Barile’s lab is beginning by studying two reactions central to renewable energy and environmental technologies. The first of these is the conversion of carbon dioxide back into fuels.

“I’m excited that our laboratory is working on new catalysts that can convert carbon dioxide to useful fuels. If successful, this research could result in technologies that allow us to negate our deleterious greenhouse gas emissions and achieve a future with a more stable climate.”

Earlier this year, Barile received a National Science Foundation CAREER Award, an NSF program that supports early-career faculty who have the potential to serve as academic role models in research and education.

“The CAREER award will allow me to pursue catalysis research from a different angle from other researchers, and hopefully, in the end, come away with a deeper understanding of how catalysis works,” he said. “In the earlier days as a graduate student, I rode on the hope that I would get lucky and discover the next best catalyst. My shift towards aiming for deeper understanding is the main way my research has evolved over the years. I believe that if that deeper understanding can be uncovered, it will open the floodgates for exciting and world-changing research, far beyond what can be achieved through a single, perhaps fortuitous, discovery.”

The CAREER award will support graduate and undergraduate research in his laboratory that focuses on electrocatalysis. Barile and his team will be studying new strategies to make these catalysts efficient, durable and inexpensive.

“We must look at the short term and the long term as things get more dire,” he said. “We must do risky projects—we learn from failing the risky projects, too. I want my students to learn from me that there is value in taking risks. A healthy embrace of failure fueled by perseverance and curiosity will result in growth beyond their wildest imagination.”

“I’m excited about the CAREER award,” he said. “Taking CO2 out of the air is totally game changing—it could be 20 years away, but it could be what saves the planet.”

In his lab, Barile is using a “carbon dioxide reduction electrolyzer,” which uses electricity to push unfavorable reactions forward such as the conversion of carbon dioxide back into useful fuels like methane, methanol and formic acid. In principle, these fuels could then be used in fuel cells to power vehicles or buildings. Electrolyzers are common, but Barile’s is a custom designed instrument tethered to a gas chromatograph that allows his group to identify and measure the products that are generated during the experiment.

Electricity passes through the electrolyzer and through a solution of water and dissolved carbon dioxide. Postdoctoral fellow in Barile’s lab, Hanqing Pan, fabricates polymer-modified metal electrodes (usually copper) capable of selectively converting carbon dioxide to synthetic fuels. Understanding the mechanism of CO2 reduction is key in designing effective catalysts for this reaction, and this is where Barile’s background in materials science, chemistry and engineering fortuitously intersect.

“By designing catalysts with different structures, we can control how the reaction proceeds and what type of fuel is made,” Barile said. “We do this by coating the catalyst in a fluoropolymer. We discovered that by changing the proton permeability of the fluoropolymer, we can alter the selectivity of the catalyst for different fuels.

Devices that facilitate this reaction could one day be implemented in point sources of carbon dioxide emissions like power plants.

“There are several modifications that would need to be made before it could be scaled up to industrial use,” he said. “First, it would have to be modified with a carbon dioxide capture unit so that carbon dioxide could be concentrated from the air (instead of using pure carbon dioxide from a tank) before it is sent into the electrolyzer. Second, the electrodes would have to be designed so that they could handle large quantities of gas such that the fuels could be generated at industrially meaningful rates.”

“Such a breakthrough would go a long way towards mitigating climate change. The dream is to set up a cycle in which carbon dioxide is converted to one or more of these fuels, and then these fuels could be harnessed in fuel cells to power vehicles or other devices. This scheme would allow society to create a closed-loop recycling of carbon. It takes energy to reduce carbon dioxide back into useful fuels, but if that energy is provided by a carbon-free source, we can start lowering CO2 levels in the atmosphere.”

The second reaction Barile will focus on is the conversion of nitrate to benign nitrogen gas. Nitrate ions are a primary component of fertilizer and a major environmental pollutant, particularly in waterways.

“A great example is Lake Tahoe,” he said. “Increased nitrate concentrations have led to the increased growth of algae, which has decreased the lake’s famous water clarity. The nitrate in fertilizers comes from chemical processes that start with nitrogen gas in the air. However, there is no process to convert all of that nitrate back to nitrogen once it is in the environment. So, just like with carbon dioxide conversion, nitrate conversion catalysts could help this problem by closing the loop and enabling nitrogen recycling.”

He said while it feels like the chemistry community is really close to finding a useable solution for climate change, science has been close for years.

“That is one of the reasons why there are thousands of scientists across the globe working on these problems, hoping to push a technology to the finish line. But then you look at the literature and realize that we have been ‘close’ for thirty or more years. This realization has caused me to take a step back and really try to analyze the fundamental science and see what researchers have been missing.

“There are thousands of different problems that I could research as a chemist. For me, I find it most exciting to focus on the problems I believe that, if successful, will have the biggest impact on society.”