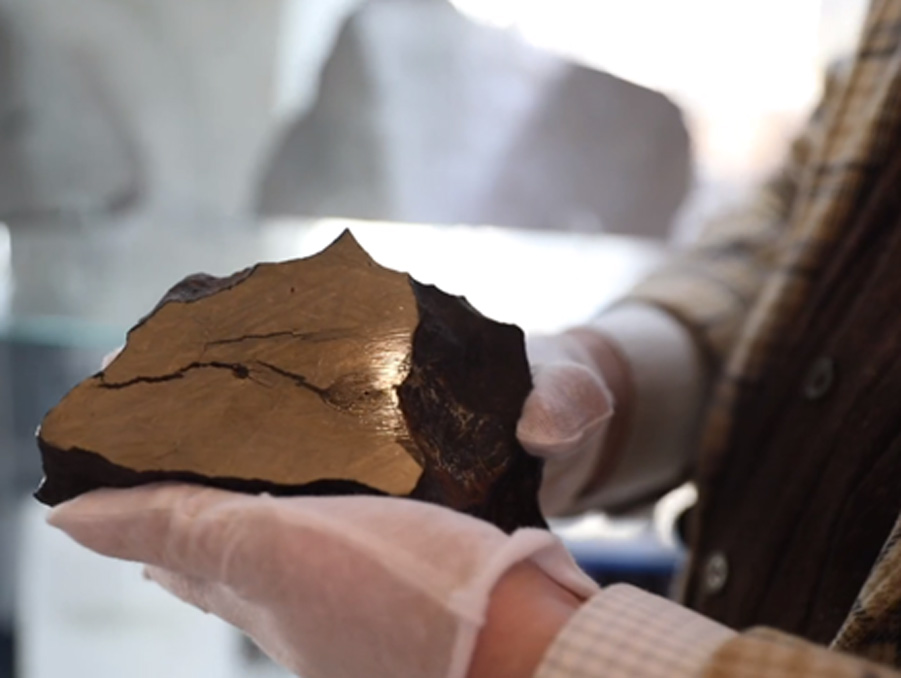 So you think you've found a meteorite. Rachel Micander, a graduate student in the Department of Geological Sciences and Engineering and a geologist for the Nevada Bureau of Mines and Geology, shares tips on identifying meteorites.

How do I find out if I have a meteorite?

The quickest way to see if you have a meteorite is to follow this flow chart from Washington University in St. Louis. This self-test checklist can be done in the comfort of your own home with ordinary household objects and is an excellent way to determine if you have a meteor-wrong. In some cases, a rock will meet all the criteria of a meteorite, but just because the flow chart didn’t take you to the “It’s Not A Meteorite” box, that doesn’t mean it is a meteorite. At that point it’s best to bring the rock into an expert for further evaluation. The minerals hematite and magnetite, both iron oxides, are commonly confused with meteorites. These minerals are magnetic and very dense (heavy for their size) – they will sometimes appear shiny on the outside as well. So, how can you tell if you have an iron oxide mineral or a meteorite? Test the streak of course!

Streak is a physical property of many rocks and minerals that can help geologists with identification. Testing the streak can be done by scraping the rock across an unglazed piece for ceramic tile or the unglazed bottom of your least favorite coffee mug. If you’re feeling really fancy, you can order some proper streak plates online or from your local geology outfitters. Meteorites typically will not leave a streak behind on the streak plate. If they do leave a streak, it will be very faint and kind of gray, but you have to apply a lot of pressure when dragging the rock across the plate to get that result. However, hematite and magnetite will leave a streak! Hematite leaves a rusty-red streak behind while magnetite leaves a dark gray streak. Some igneous rocks that are often mistaken for meteorites won’t leave a streak on the streak plate either – so the absence of a streak (or a light gray streak) does not mean you have a meteorite.

Meteorites can look a bit different from the terrestrial rocks around them, but the best way the answer this question is with some photos!

In addition, meteorites have some characteristics that can help distinguish them from terrestrial rocks. Those characteristics are density, magnetism, regmaglypts, and fusion crust. Meteorites are usually very dense (heavy for their size) since they contain metallic minerals such as iron. They are also magnetic, since many meteorites contain iron. However, many terrestrial minerals and rocks are dense and magnetic, so these properties alone should not be used to identify your sample. Meteorites will usually display some unusual shapes called regmaglypts – these are fingerprint-shaped indentations or “dimples” that can occur on the surface of a meteorite. It’s important to note that if you see these dimples, but no fusion crust, the rock you have is not a meteorite.

That brings us to the fusion crust – a thin (you guessed it) crust on the surface where the meteorite melted as it fell through the atmosphere. Presence of a fusion crust is a tell-tale sign of a meteorite. That being said, different types of weathering and coatings on terrestrial rocks can be mistaken for fusion crusts. These include: desert varnish; hematite coatings; spheroidal weathering, which is the process where concentric outer layers of a rock break off in pieces; and chemical weathering processes that produce thick, discolored rinds on a rock's exterior. Photos of different types of weathering results and coatings are helpful in identifying meteorite fusion crusts too.

How rare is it to find meteorites?

It’s pretty rare, but not unheard of. We get several phone calls and emails a month at the Nevada Bureau of Mines and Geology from people thinking they have found a meteorite. Of those who have brought their rocks in for me to look at, only one might have been a meteorite. Incidentally, this possible meteorite was brought in by an 8-year old and his mom. I never heard if they decided to send it off for further testing. That being said, there are several playas in Nevada where meteorites have been found. If you’d like to learn more about where meteorites have been found in Nevada, the Meteoritical Society has a searchable database that can be searched by geographic area.

Where do meteorites fall?

Meteorites fall all over the world, but most meteorites are found in the world’s deserts where they are easiest to spot amongst sand dunes or snow fields.

In fact, most meteorites are found in Antarctica (a polar desert), followed by Africa (in the Sahara Desert), and then Asia. According to the Meteoritical Society, a total of 1878 meteorites have been found in the U.S. from 1807 through 2021, most falling in the desert southwest. According to Washington University in St. Louis, of these recorded meteorites, 313 were found in Texas, 266 in California, 226 in New Mexico, 175 in Arizona, and 155 in Nevada.

What are meteorites commonly mistaken for?

Meteorites can be mistaken for slag, basalt (an extrusive igneous rock), iron ore, and iron nodules. I’ve also seen bits of lead bullets, coal, hydrothermally altered rocks, rocks covered in desert varnish, and gabbro (an intrusive igneous rock) that people have brought in hoping for a positive meteorite identification. Just because the rock is dark, dense, smooth, or just plain weird-looking, does not mean it is a meteorite.

Slag is probably the most common meteor-wrong that we see. It’s the dense, usually magnetic, often black and glassy by-product of smelting – the mineral refinement process used to extract metals from ore.

It was also used as railroad ballast, road construction, and landscape materials. As a result, it’s very common and can wind up in some weird places. While it may look a lot like a meteorite, slag usually vesicular and is glassy, two things a meteorite is not.

For more information on meteorites, identification, and what to do if you think you have found one, check out this online resource prepared by Dr. Randy Korotev from the department of Earth and Planetary Sciences at Washington University in St. Louis. Dr. Korotev is a lunar geochemist and has put together an incredibly robust resource with photos of meteorites and meteor-wrongs to help you learn more about meteorites and their terrestrial impersonators.