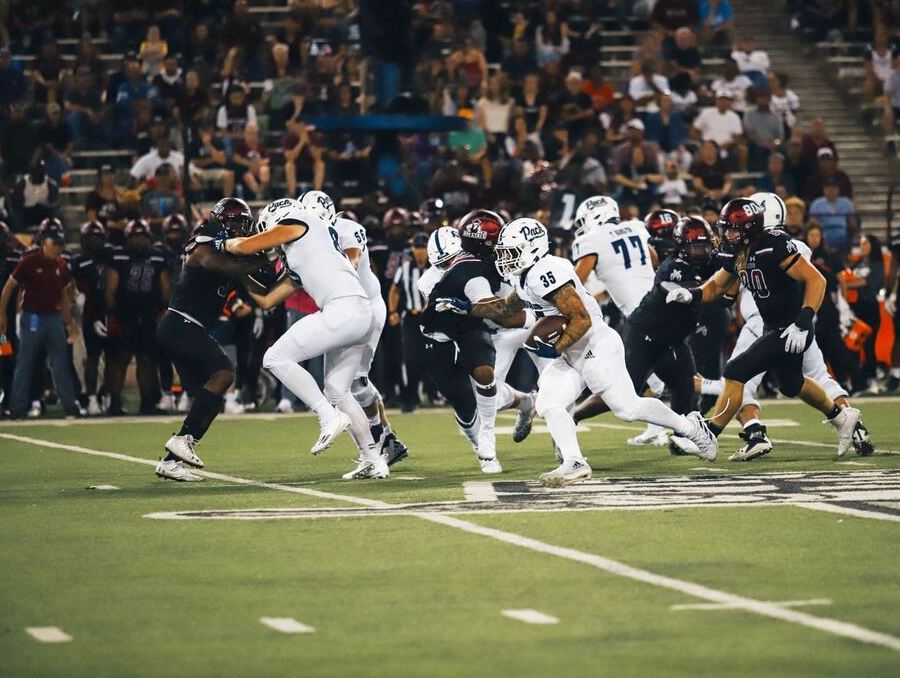 The Wolf Pack Football Home Opener will be on Saturday, Sept. 3, 2022 at Mackay Stadium.

Nevada (1-0) hosts the first of two-straight afternoon kickoffs at Mackay Stadium Saturday, hosting Texas State (0-0) at 2:30 p.m. Saturday's contest will be broadcast on Nevada Sports Net with Alex Margulies (play-by-play) and Zack Madonick (analyst) on the call, with Kirsten Moran reporting from the sidelines.

The Wolf Pack Radio Network will call the game as well on ESPN 94.5 FM with John Ramey (play-by-play) and Mike Edwards (analyst) in the booth, with the 60-minute pregame show to begin at 1:30 p.m. PT.

Toa Taua (109 yards, 19 carries) and Devonte Lee (68 yards, two touchdowns, 13 carries) combined for 177 yards on the ground, and the Wolf Pack defense made five takeaways, with Isaiah Essissima making two of the four interceptions on the night.

The Pack outscored the Aggies, 17-2, in the second quarter to take control, then iced things with a nearly seven-minute drive late in the fourth quarter, capped by Brandon Talton's 38-yard field goal with 1:35 to play.

Saturday's contest will be just the second all-time between Nevada and Texas State. The Pack defeated the Bobcats, 34-21, in San Marcos, at the first meeting.

Nevada head coach Ken Wilson was on that Wolf Pack staff that defeated the Bobcats in 2012, serving as associate head coach and overseeing the linebackers.

For Talton it is his seventh Mountain West Special Teams Player of the Week honor. Essissima takes home his first.

Essissima highlighted a five-takeaway effort by the Nevada defense in Saturday night's 23-12 victory at New Mexico State. The Houston native picked off a pair of passes and made two tackles, as the Wolf Pack intercepted four passes.

Essissima's first pick snuffed out a potential New Mexico State scoring opportunity, as he snagged a Gavin Frakes pass in the end zone. His second interception came on the Aggies' ensuing possession following Nevada's first touchdown, growing the Pack momentum and leading to a Talton field goal to up Nevada's lead to 10-2.

Talton went 3-for-3 on field goals in the contest, connecting from 28, 34, and 38 yards out. Each of his last two field goals came in the fourth quarter, and re-established a two-score lead for the Pack. He capped his scoring on the night with a 38-yard kick that put the Pack up 11 with just 1:35 remaining.

The Nevada defense set the tone as a ballhawking unit right away in 2022, making five takeaways in the 23-12 win at New Mexico State. Four of those takeaways came on interceptions, with Isaiah Essissima snaring a pair, Bentlee Sanders getting one, and Tyson Williams snuffing out New Mexico State's final drive with his first of the season. The fifth takeaway came on Dom Peterson's strip-sack and recovery.

For Essissima, the two picks marked his second and third interceptions as part of the Wolf Pack (he had one in 2021), while for Sanders it was his first in a Nevada uniform. Williams, meanwhile, upped his career interception total to seven, with his pick.

It was Nevada's first five-takeway game since Aug. 31, 2019's 34-31 win over Purdue, when the Pack defense had three interceptions and two fumble recoveries.

As the season dawned, it was clear that fifth-year running backs Toa Taua and Devonte Lee would spearhead the Pack attack. Saturday night at New Mexico State, they fulfilled that promise.

The pair combined to rush for 177 yards on 32 carries (5.5 ypc), with Taua posting the 11th 100-yard game of his career. Taua led the way with 109 yards on 19 carries, including a 24-yard gain in the second quarter that sparked Nevada's first scoring drive.

Lee finished that drive with a 32-yard scamper into the end zone, the first of his two touchdown carries on the night. His night concluded with 68 yards and two scores on 13 carries.