The link between memory and motor systems 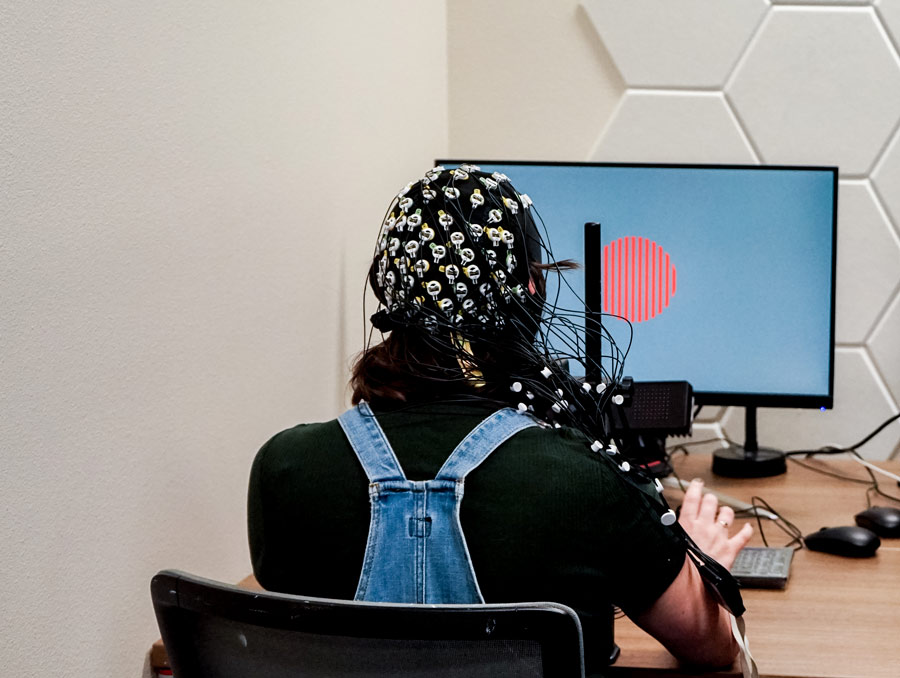 The link between memory and motor systems

Maybe making a cup of coffee is a daily requirement for you. You have a specific way you like your cup of joe, and you make it the same way every day. Maybe you grind your own coffee beans and make a pour over with some frothed milk.

“There is a series of things you have to do that have to be executed in the right order,” said Edward Ester, assistant professor of psychology. “If you get them wrong, you get a lousy cup of coffee.” And nobody wants that.

Ester studies the relationship between information people receive from their environment that is committed to short-term memory and how they are able to act on that information.

“The way we conceptualize short-term memory is as a mental workspace where the brain can not only put information, but also process that information,” Ester said.

Ester is interested in understanding how short-term memory interacts with the part of the brain that controls motor output. Researchers believe that memory systems exist to provide a basis or reason for action. But people can perform actions without having to keep the memories that initially started or inspired that action, and Ester wanted to know the extent to which the brain’s motor and memory systems are communicating. Rachel Weese, an undergraduate in Ester’s lab majoring in psychology and minoring in biological anthropology, worked on this research question with Ester.

“It’s those kind of goal-directed behaviors that Rachel and I are really interested in, and how information from that short-term memory system is translated into how people interact with the world,” Ester said. “We have a pretty good understanding of how the motor system is mapped out. On the memory side, things are a little bit more opaque.”

Researchers wanted to know whether the brain’s networks controlling memory and actions can be active simultaneously or act in sequence. The real answer likely lies somewhere in between and can provide the researchers with insight into how tightly integrated the brain’s motor and cognition networks are.

“We have some ideas about how different brain areas might be responsible for controlling those individual (motor and working memory) processes,” Ester said. Those ideas include a model that Ester describes as “the Psychology 101 thing that everybody learns” but also as “woefully incomplete.”

“This is the model that has dominated both psychology and cognitive neuroscience for the past at least 70 years,” he said. The model consists of three boxes: The first box represents perception or sensation, with an arrow that goes to a box representing memory and decision-making. There is an arrow from the memory box to a box representing motor outputs and actions. The arrows show how the information is transformed in the brain.

“So there’s this nice linear output,” Ester said. “But we know there are a bajillion ways that model breaks down.” For example, the things you act on informs the things you pay attention to, so the “motor” box can actually inform the “perception” box. “We’re getting these super impoverished views of how the brain is actually solving problems in real world tasks.” Ester and Weese set out to determine how the memory and action networks in the brain actually interact.

They recruited research subjects to sit in front of a computer screen with electrodes on their heads. The subjects were shown two images and were asked to remember one of them. The experiment hinted which one the subjects were supposed to remember, and they would have to respond at the end of the trial, with either their left hand or their right hand, indicating the correct image. The electroencephalogram or EEG electrodes captured information about what parts of the brain the subjects were using throughout the process. Monitoring which networks were active in the brain helped the researchers determine whether they were being used in sequence or in parallel.

“The degree to which the timing of brain signals associated with stimulus processing and response planning overlap gives us some insight into just how tightly integrated brain networks associated with cognition and action really are,” Ester said.

What Weese and Ester found was that the both the short-term memory parts and the motor parts of the subjects’ brains could be active at the same time, showing that the motor and memory parts of the brain could act simultaneously. Now, the researchers want to figure out whether there are certain actions or decisions that could be made simultaneously (like making your cup of coffee) or sequentially. The lab is also interested in looking at how different people land on the spectrum of simultaneous or sequential brain network activity.

To Ester, short-term memory seems to be “a fundamental component of how we think about and interact with the world.” But the “woefully incomplete” model isn’t useless, Ester said. “Eventually, and such is the way of science, all models are wrong, but some are useful.” While neuroscientists have learned a lot following the model, it is an oversimplification of the relationship between memory and action.

It’s time to move beyond that model and consider a more holistic perspective on how cognitive and motor systems interact.

“There were many people who came before us,” Ester said, referring to older research papers that pointed out the linear model was wrong but never got much attention. “It’s time to move beyond that model and consider a more holistic perspective on how cognitive and motor systems interact.”

The holistic perspective will be difficult to parse out. The brain is still largely a mystery, and as Ester mentioned, memory is still a black box that scientists have yet to peer into.

“Memory systems are tightly intertwined with motor systems,” Ester said, “but there is some degree of independence where memory systems can think ahead. One of the defining features of the short-term memory system is that it has a capacity limit.”

Weese gave an example of a workaround for that limited capacity using a technology metaphor. She said it’s like uploading the memory from a USB drive (your short-term memory) to a computer (the motor plan). You can toss the drive afterwards to avoid clutter.

Developing a better understanding of how these systems interact could be important for people learning to use a prosthetic that uses a neural implant. It takes some getting used to, but eventually the motor plans become second nature.

This story was originally published in the 2022 'Live a Life of Discovery' magazine from the College of Science under the title, "Thinking Ahead."