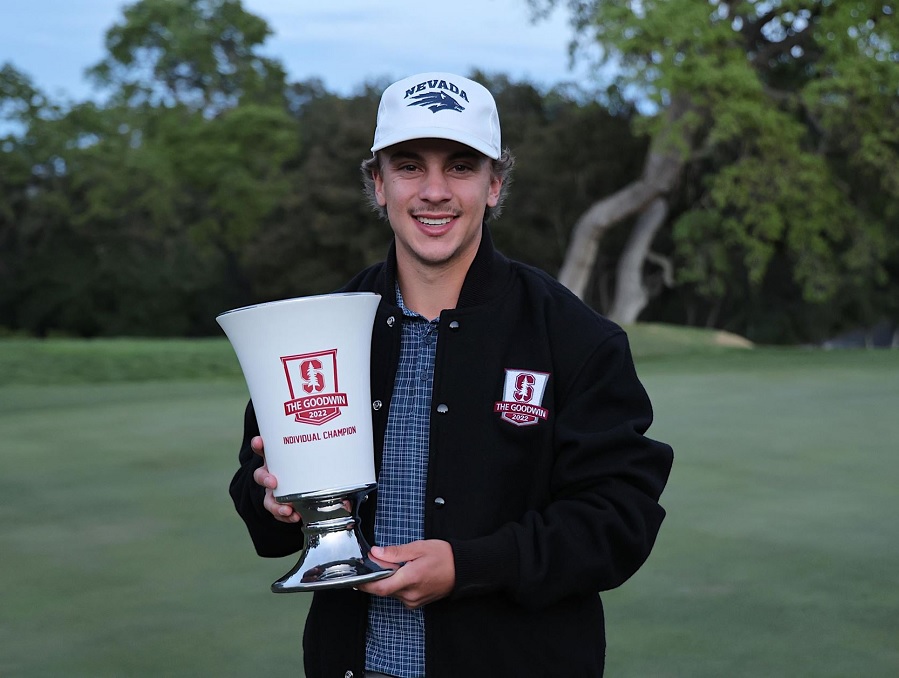 Peyton Callens made birdie on 18 to win and the Nevada men's golf team shot five-under to hold its spot in second finishing five shots back of Washington at The Goodwin.

Peyton Callens won the first tournament of his career with a -13 (65+67+65=197) on a walk-off birdie on 18 to defeat Lucas Carper (-12) of UC Davis. Callens posted two career-best rounds of 65 in the first round and second round. It is the second straight year that Nevada has had an individual champion in The Goodwin with Sam Harned (-10) taking the event in 2021.

"Just an incredible accomplishment. His level of play throughout all 54 holes is remarkable," Head Coach Jacob Wilner said. "This marks back-to-back individual titles at The Goodwin for our program with Sam Harned winning the tournament last season."

Washington (-22) won the team title, Nevada finished at 19-under to claim runner up after a six-under final round. Stanford (3rd, -17) led for most of The Goodwin but dropped two spots into third after a 283 final round. SMU finished fourth at 16-under and Oregon (-12) rounded out the top five.

Coach Wilner continued. "It's just an awesome accomplishment collectively to be in contention down the stretch and finish second in such a strong field. Finishing second is a testament to our program. I still believe we haven't peaked yet as a team which is our goal as a team heading into the Championships and postseason."

Nevada recorded its third-lowest score in program history during the 54-hole tournament (821) and its lowest score since 2012-13 (818) in the SCVB-Pacific Invitational. It is the fifth time that a top-10 lowest score resulted in a tournament win.

This is the second time this season that Nevada featured an individual champion with Quim Vidal Mora taking the Saint Mary's Invitational on Nov. 10, 2021. Callens rode the wave up two spots and shot five-under during his final round to clinch the tournament with a birdie on 18.

Callens really made his day on Par 3s and Par 4s with a combined eight-under for the senior from Langton, Ontario. He sank 14 birdies and recorded 36 pars along with one eagle on his way to victory.

The Pack put together one of its most complete efforts with three of the five golfers finishing under par. Vidal Mora (-5) shot three-under 67 to close his day with birdies on two of the last four holes and tie for 15.

The Pack is back in action Apr. 4-5 with the Cowboy Classic hosted by Wyoming at Whirlwind Golf Course in Chandler, Ariz.

The Pack will play nine at home, beginning with Dec. 28's contest against the Broncos, and nine on the road games in the 18-game slate