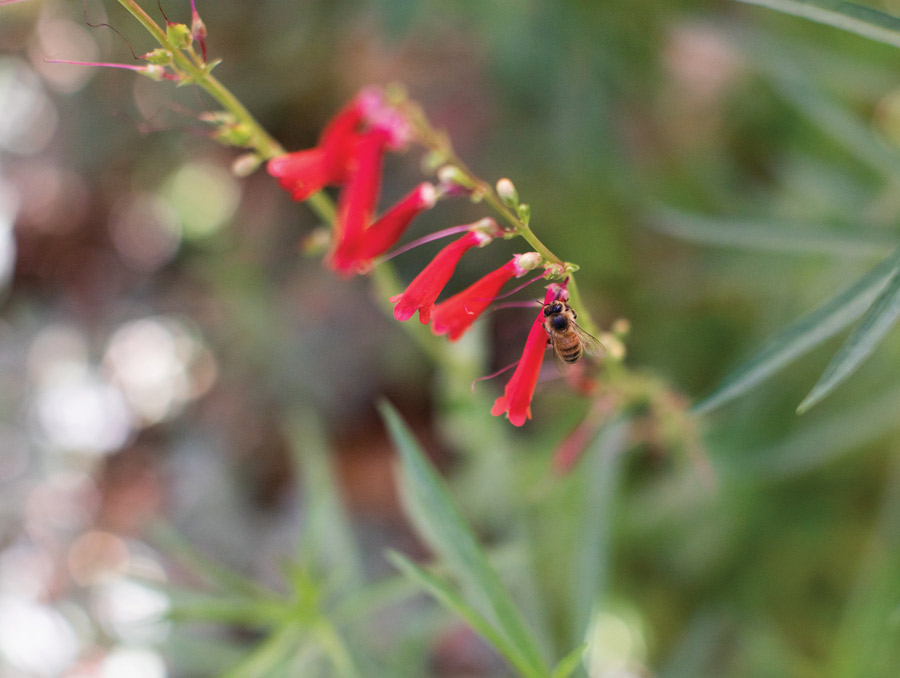 Pesticides have been used around the world to mitigate harm to crops caused by insects. Due to the increased understanding of how they negatively impact bees and other pollinators, their use has been significantly restricted, like in the United States, or even banned, like in the United Kingdom. For the first time in several years, the U.K.’s government lifted the ban on a pesticide called thiamethoxam, which fits in a class of pesticides called neonicotinoids. Use of neonicotinoids, or neonics, in the U.K. was banned in 2018 due to the known damage they have on pollinators. But the ban has been lifted to fight a virus spread by aphids that is killing sugar beet crops. Though the impact on pollinators in the U.K. is a concern, pollinators in the U.S. face much higher levels of neonics in their environment.

Anne Leonard, an associate professor of biology, is interested in how pesticides impact bees. She has focused her research on neonics, which affect bee physiology, behavior and reproduction and are of particular concern to bee biologists due to their widespread use and effects. But these aren’t the only consequential chemicals bees come in contact with. Nectar from flowers contain naturally occurring chemicals called nectar secondary metabolites (NSMs) that also affect bee behavior.

Pesticides have a role. I’m just like everyone else who goes to the grocery store and expects to get fruits and vegetables. But we should also raise awareness of how these chemicals are affecting insects that are seeing massive population declines.

“There is a whole chemical soup out there on many altered landscapes that bees are encountering,” said Leonard. “And we know so little about what the consequence is of the combination of these chemicals. I do believe there are chemical-specific effects, especially on behavior.”

Leonard and her colleagues wanted to study how the combination of NSMs and neonics might impact bees. Leonard worked with Sarah Richman, a former postdoctoral scholar, and Angela Smilanich, an associate professor in the Department of Biology.

“We usually just give pesticides to bees in sugar water, which is an artificial, chemically simplified nectar,” Leonard said. “Sarah wanted to ask whether it matters if you use more natural nectar chemistry. The answer is complicated, but it probably does.”

The researchers studied the interactions between the neonic imidacloprid and the NSMs digoxin, caffeine, and thymol, which are found in a wide variety of plants. Caffeine is found in citrus nectar, and could be an important consideration for citrus farmers. Digoxin is found in foxglove plants which are recommended for pollinator gardens, though many of the plants people purchase for their gardens are treated with neonics. Thymol is used in honeybee hives as a miticide.

“We chose these NSMs because there is a fair amount already known about them,” Richman said. These particular NSMs will help researchers understand how the neonic imidacloprid is affecting bees pollinating a broader range of plants.

“We thought these results might be interesting to beekeepers who are in agricultural settings exposing the bees to these chemicals,” Leonard said. She added that beekeepers who use NSMs like thymol to suppress parasites that harm bees should be aware of how NSMs interacts with any neonics the bees come across.

For this study, the researchers gave bumblebees the NSMs and monitored their health using three parameters. The NSMs themselves had mixed effects on the bees. The caffeine increased activity and lengthened bee lifespan but had no effect on immune function, thymol increased activity but decreased longevity and immune function, and digoxin improved immune function but decreased longevity and activity level. The responses changed when the bees were treated with NSMs and the neonic imidacloprid. When imidacloprid was introduced to the bees’ diets in combination with NSMs, the health outcomes for the bees never got better, and sometimes got worse. The findings show that for plants with caffeine, thymol and digoxin in their nectar, the introduction of imidacloprid would likely decrease the lifespans, activity levels and immune function of the bees.

“The phytochemical landscape is very complicated. There’s no getting around it and we need to reckon with it at some point,” Leonard said. “Hopefully we’ve started that process, and there are many directions that other researchers can follow in the future.”

Leonard said next steps could be looking at neonic alternatives or other neonics and their interactions with NSMs and consequential effects on bees. “There is a lot of work that could be done on this.”

Surveying the landscape could also be an important part of understanding how neonics spread in an ecosystem. “There is very little work outside of Matt Forister’s lab to do that, at least in the U.S.,” Leonard said. “I think these chemicals may be travelling farther than we think.” Chemicals from agriculture have been found in plants in nature reserves, which are supposed to be chemical-free.

For bee researchers in the U.K. whose work will likely be impacted by the reintroduction of thiamethoxam, a host of questions faces them. “My immediate questions are what is the geographic scale of sugar beet crops in the U.K., how close are they in proximity to wildflower patches, and what is growing adjacently?” Richman said. “One of the things we know about neonics is that they are super, super, super water soluble. Even if they are treated in seeds in an agricultural setting, they can leach out, especially in a wet place like the U.K., percolate through the soil and then be taken up by wildflowers or anything growing nearby.”

Leonard doesn’t believe there should be a moratorium on pesticide use. “Pesticides have a role,” she said. “I’m just like everyone else who goes to the grocery store and expects to get fruits and vegetables. But we should also raise awareness of how these chemicals are affecting insects that are seeing massive population declines.”

During the pandemic, Leonard was doing some at-home experiments with common pesticides in her own backyard. Even though she studies pesticides, she found it challenging to follow the dilution instructions for the pesticides, which were based around the surface areas of plants. “I found it really difficult to safely mix those chemicals,” she said.

In June, the Environmental Protection Agency released a biological evaluation of three neonics: imidacloprid (used in this study), thiamethoxam (which will be used in the U.K. again) and clothianidin. The report showed that all of these neonics can cause harm to endangered species, leading some researchers to hope that the pesticides may be more regulated.

“While the release doesn't specifically mention pollinators, I think it's pretty striking that all three chemicals are likely to have an adverse effect on the majority of species and habitats included in their study. The fact that they expect 67% of species and 56% of habitat, at the low end, to be adversely affected would hopefully prompt the government to act,” Richman said.

While she notes that there are many steps between a research publication and policy being implemented, Richman said she still finds it exciting to be a part of the science that someday will be a part of informing policy.

This story was originally published in the 2022 'Live a Life of Discovery' magazine from the College of Science under the title, "Noxious nectar."