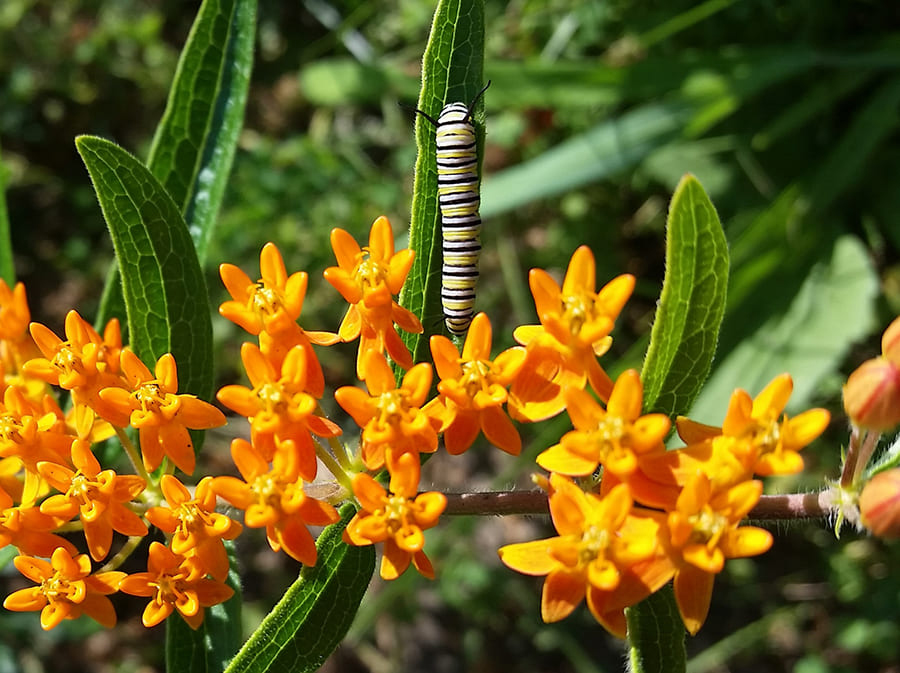 Milkweed plants purchased at retail nurseries across the United States were contaminated with pesticides harmful to monarch caterpillars that rely on milkweed, a study led by researchers at the University of Nevada, Reno found. Every plant sampled was contaminated, even those that were labeled “wildlife-friendly.”

Researchers gathered 235 milkweed leaf samples from retail nurseries across 15 states and tested them for pesticides. A total of 61 different pesticides were found, with an average of 12 per plant and as many as 28 per plant, according to the study in collaboration with the Xerces Society for Invertebrate Conservation and published Monday in the peer-reviewed science journal Biological Conservation.

Milkweed in nurseries are often purchased and planted by people hoping to support the monarch butterfly, which was recently listed on the IUCN Red List of Threatened Species™ as endangered. Western monarch caterpillars depend on milkweed for food. They are specifically adapted to the plant, which is toxic to other animals, and don’t have alternative sources of food.

"In a previous study in California that primarily looked at milkweed in agriculture and urban interfaces, we had looked at a small number of plants from retail nurseries, and found that they contained pesticides," Matt Forister, a biology professor at the University who studies insect ecology and is a coauthor of the paper, said. "So we were prepared for this much larger sample of nursery plants to again uncover contamination, but it was surprising to see the great diversity of pesticides found in these plants. In many ways, they are as contaminated or even worse than plants growing on the edges of agricultural fields. That was a surprise, at least to me."

While researchers couldn’t fully assess the toxic load carried by these plants, 38% of the samples had residue levels that could harm monarchs’ ability to migrate and forage, primarily due to high levels of fungicides. Fungicides have generally been overlooked as an issue for insect conservation efforts. The negative effects on monarch caterpillars could result in smaller wing sizes and potentially other effects.

“They are pesticides, they’re designed to kill,” Forister said.

The potential impacts of multiple pesticides interacting on a butterfly are unknown, but likely are not good.

“The farther along in the life stage you go, the higher concentration you need to have a sublethal effect,” Christopher Halsch, the lead author of the study and a doctoral student at the University of Nevada, Reno, said. “For the caterpillars, this means a low concentration can have a more damaging effect than it would have on the butterflies.”

Plants labeled “wildlife-friendly” from stores and nurseries included in the present study did not have fewer pesticides in or on the leaves of the milkweed plants.

“That was the most shocking part,” Halsch said. “The fact that plants labeled as potentially beneficial or at least friendly to wildlife are not better and in some cases might be worse than other plants available for purchase. This research sheds light on how pesticides may impact western monarchs, but many other butterflies are facing even steeper population declines, and pesticides are likely one driver.”

The process of growing and shipping the plants is complicated, and reducing contamination during that process will be an important challenge to address moving forward, according to Halsch and Forister.

The study’s findings highlight the need for nurseries to ensure that plants being sold as pollinator-friendly are also pollinator-safe.

“Everyone can take steps to address the risks we uncovered,” Aimee Code, Pesticide Program Director at the Xerces Society for Invertebrate Conservation, said. “Consumers can let their nurseries know they want plants that are free from harmful pesticides. Nursery outlets can talk with their suppliers and encourage safer practices, and government agencies can improve oversight.

"And it’s important to keep gardening for pollinators for the long term, just take steps to reduce pesticide exposure: cover new plants the first year, water heavily, discard the soil before planting, as it may be contaminated, and avoid pesticide use.”

Monarch butterflies are widely celebrated, not least along the California coast, where large congregations of western monarchs overwinter in groves of trees. Over the last few decades, western monarch numbers have plummeted from millions in the 1980s to as few as 1,800 individuals, although this winter fortunately recorded a population increase. If that positive trend continues, with time the population could be brought back to former healthy levels.

University of Nevada, Reno Extension provides online tips and resources for living with smoke and fire