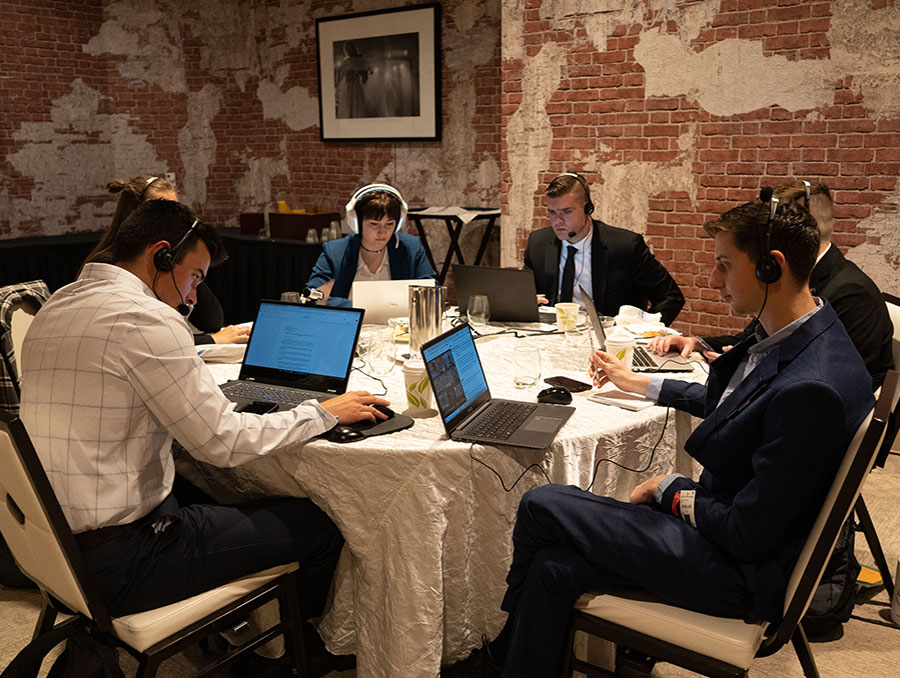 For the first time since the outbreak of COVID-19, international affairs students from the University of Nevada, Reno had a chance to cut their teeth in a live, intercollegiate simulation of a conference of the United Nations. Students got firsthand experience as active participants in a simulation of how countries across the world work with (and sometimes against) one another when their national interests are on the line. Dressed to impress, students huddled with their delegations around meeting tables in an expansive conference room at the Whitney Peak Hotel in Reno, Nev., beaming their policy positions out to the dozens of universities participating in the 71st Annual Conference of Model United Nations of the Far West. This year the various arms of the United Nations discussed and debated the status of women and girls in the world, with mock committees of the global flagship international organization passing resolutions to effect positive change. The 20 participating students were part of an international affairs class conducted by Dr. Nicholas Seltzer, an associate professor in the Department of Political Science in the College of Liberal Arts at the University of Nevada, Reno.

The students were divided into four teams representing the United States, Saudi Arabia, Mexico and Afghanistan. In character, they competed against more than 50 other colleges and universities, each of which was assigned to represent one or more of the United Nations’ member states as delegates. Delegations were scored based on essays, draft resolutions and country profiles written before the competition, as well as their performance speaking and debating at the conference. All of the University of Nevada, Reno’s four delegations gave outstanding performances, receiving numerous awards. One student, Amika Starr, was elected to the prestigious position of Rapporteur for the Committee on the Status of Woman, to address the General Assembly during the Closing Plenary Session.

Ms. Starr remarked, “I was really shocked that I was able to be a rapporteur. I went into the conference feeling very nervous and a little underprepared but it was actually really easy and a lot of fun once I got started. Actually, I think I got voted to be rapporteur unanimously by my committee, so that was cool. And when I addressed the plenary session, everyone, especially in our class, was super supportive and encouraging. It was a very honoring and humbling experience all at once.”

Ryan Hines echoed her remarks on the value of this unique experience. He stated, “I was able to improve my speaking skills, and improve upon many other crucial skills for us as we move into the world. For example, how to better network [and] work in a high-stress environment with a team.”

Students appreciated this rare opportunity to engage in real, out-of-classroom public speaking. Tatum Wertz contrasted her experience in Model United Nations with that of her other political science classes. She remarked, “Learning through debating with other students about international issues, public speaking, collaborating on resolutions and learning to understand other perspectives is a completely different and vital experience for every political science student. No matter what career I pursue after college, I'll definitely take many skills I've learned in this class with me.”

Unlike many courses that present broad overviews and theoretical approaches to subjects, the Model United Nations format forces students to delve deeply into the nitty-gritty details of global issues. Jude Kocka recalled, “I worked [on] very real-world problems that many people do not even know of, such as climate refugees and stateless women, … collaborat[ing] with students all over the world to draft resolutions to help solve these global issues. I could not recommend this class more to everyone!”

The international affairs program offers the Model United Nations experience every spring and is open to all students who have satisfied the prerequisites of PSC 211 or PSC 231, which can sometimes be waived for students with other relevant experience or course work. In addition to the engaging experience, students earn credits toward their degree in political science or international affairs, or elective credit for others. Students from a wide variety of academic backgrounds have participated in the past. According to the professor, Dr. Nicholas Seltzer, “The challenges the world faces today aren’t merely political; they’re technical, scientific and cultural. Therefore, it’s got to be ‘all hands on deck.’ At Model United Nations, students draw upon the diversity and varieties of experience of hundreds of students from around the world to solve problems democratically and inclusively. Today it’s a simulation, but perhaps tomorrow it's for real, maybe even on the floor of the real United Nations in New York City.”