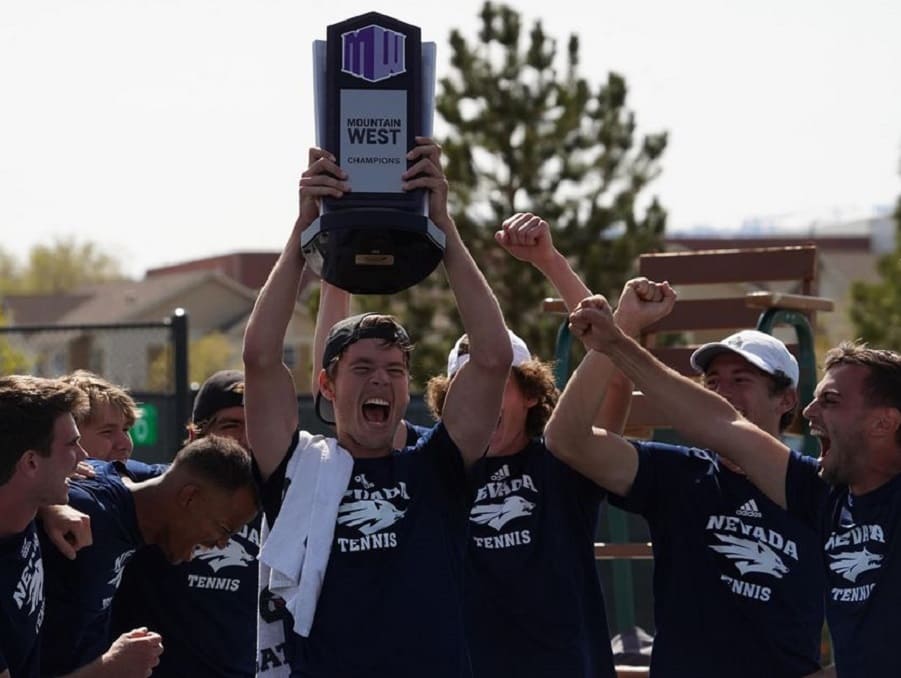 Nevada Men's Tennis, having claimed a share of its first Mountain West regular-season title, and first conference title of any kind since 1982, made it an outright crown with Saturday's 4-2 win over San Diego State in front of a raucous crowd at McArthur Tennis Center.

The Pack (17-7, 5-1 MW) also clinched the No. 1 seed at next weekend's Mountain West Men's Tennis Championship in Colorado Springs, Colo. Nevada, as the top seed, earns a bye into Saturday, April 30's semifinal, where it will face the winner of Friday's match between No. 4 and No. 5 seeds (seeds are still TBD as of press time).

Saturday, Nevada outlasted an Aztec squad that was trying to claim a share of the regular-season title for itself, with a win. The doubles point came down to the wire at No. 2, as Nevada's Loris Zisswiller and Satchel Benn fought off a 6-5 deficit to send the match to a tiebreaker, where the tandem broke a 5-5 tie by breaking the Aztecs for match point. The 7-6 (5) victory put the Pack in the 1-0 advantage.

Singles play proved to be just as contentious. Nevada helped its cause by taking the first set in three of the six matches, and Loris Zisswiller claimed a quick 6-4, 6-2 victory at No. 6 to put the Pack up 2-0.

It came down to Nos. 1 and 2, as Nevada's Matheo Coupu (No. 1) and Juan Batalla (No. 2) were trading haymakers with their opponents. While Coupu was back-and-forth in his third set against Joe Tyler, Batalla surged back from down 3-4 in the third set against Johannes Seeman.

Batalla swept two games after a switch of sides, and was in position to serve for the match, and the dual, at 5-4. He was in danger of being broken, down 30-40, before rallying for the final two points, clinching the outright title for the Pack.