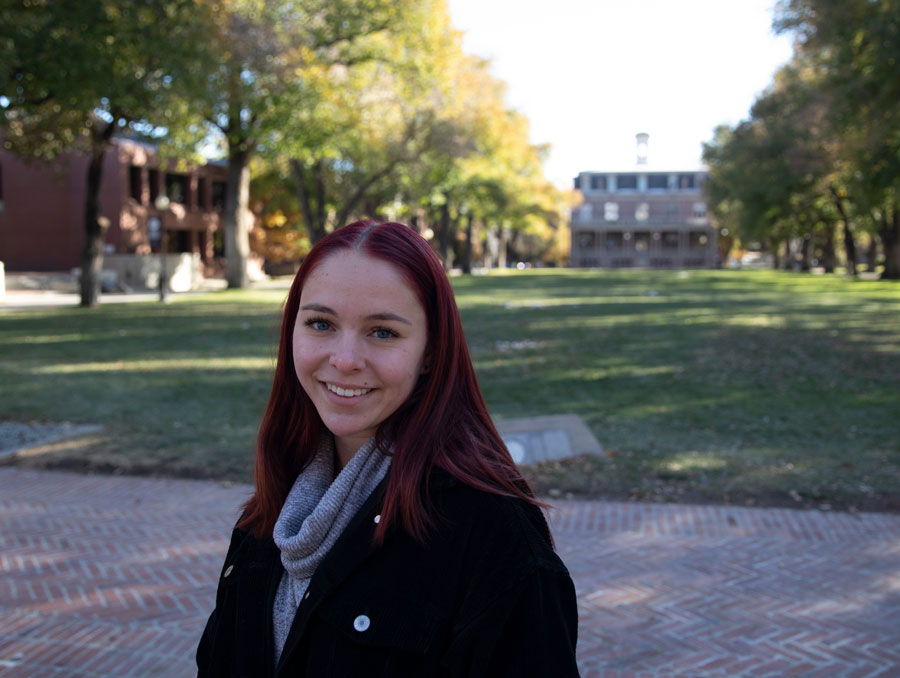 “I’d always wanted to go to UNR,” Giannantonio, now a junior, said. “I toured it in 2019, and I love the campus.” The climate of northern Nevada was appealing to Giannantonio, who was excited to escape the oppressive heat of Las Vegas where she grew up.

Giannantonio is part of the first cohort of Maximizing Access to Research Careers (MARC) Nevada students. MARC aims to increase diversity in the biomedical sciences and support students in applying to and transitioning into research-focused higher degree programs.

Giannantonio recently switched her major from pre-medical biochemistry to chemistry. She was first introduced to biochemistry in 8th grade, when she had to do a project researching science careers. It was then she decided that she wanted to pursue chemistry related to medicine.

Giannantonio said she struggled starting college during COVID and having to live at home. She wanted to attend the University of Nevada, Reno to take advantage of the in-person labs offered at the time. Since transferring, Giannantonio said she has been thriving being able to explore her independence.

In June, Giannantonio joined associate professor Wes Chalifoux’s research lab in the Department of Chemistry. Since then, she said her chemistry labs have been a breeze as she already knows a lot of the methods they are using. Doing undergraduate research has taught Giannantonio how to be more organized and detail oriented.

“I’ve applied it to a lot of my classes,” she said. “That’s helped so much, being super meticulous in my reports and writing down everything, that attention to detail has really helped me in a lot of my classes and day-to-day life.” Still, balancing classes and lab research can be a struggle, but she is prioritizing her grades and making up the hours in the lab that she can’t finish during the week when she has breaks.

Giannantonio also finds time to connect with her peers and network through Chabad, a recently-formed Jewish organization on campus, and Phi Delta Epsilon, the premed student fraternity. She said it might not seem to make sense why she’s still in the fraternity, but said that her interest is still in medicinal chemistry.

“I stayed in it with the intention to learn more about medicine through the club because I won’t be going to med school,” Giannantonio said. “It helps me understand what I’m going to be working with, working for, working towards through medicinal chemistry and make connections with future doctors.”

Right now, Giannantonio is working on synthesizing a compound called falcarinol. Falcarinol comes from carrots and fights against a fungus that impacts potatoes. Falcarinol is a challenge to synthesize because it degrades quickly. Synthesis requires a series of chemical reactions.

“This project is a little bit of an introduction to total synthesis, where you have an end product that you are supposed to make, and you have to figure out how to get there,” Giannantonio said. Synthesis can take a lot of time due to the back-and-forth nature of the work, but it’s something she’d like to pursue in graduate school. Giannantonio said the stipend provided by the MARC Nevada program has allowed her to worry less about saving for the high cost of graduate school, and to focus on maintaining her grades and research.