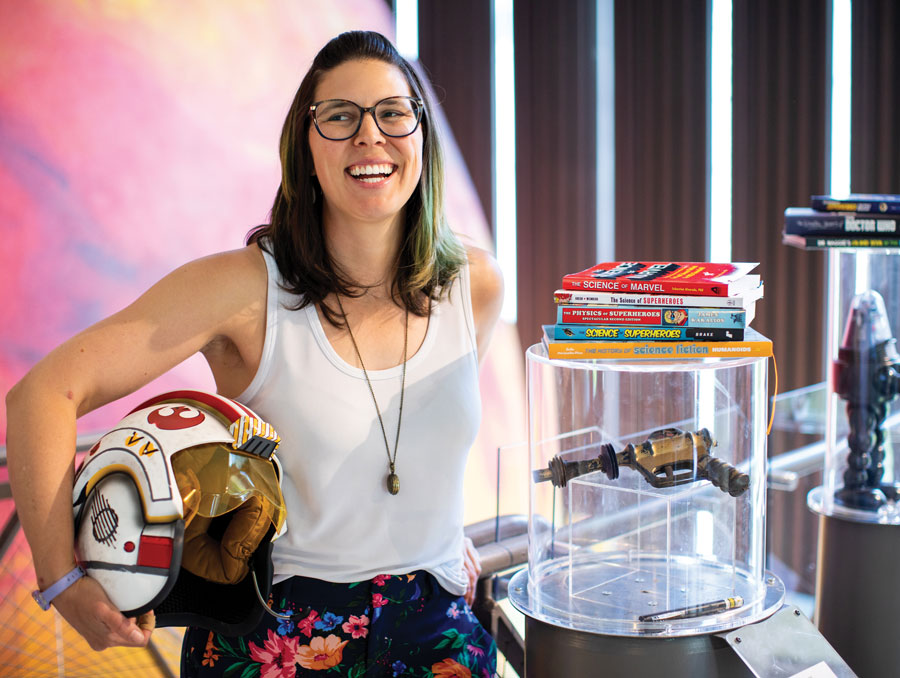 New graduate student Lauren Sankovitch joins the Department of Geological Sciences and Engineering with a long list of publications not often associated with geosciences. Sankovitch has fifteen years’ worth of experience editing comic books for big-name publishers like Marvel and series like The Avengers and Thor. As a queer woman in the comic book industry, she has more recently focused on editing nonfiction comics with themes of social justice and from the perspective of marginalized groups. She edited the graphic novel Run: Book One by the late Congressman and civil rights activist John Lewis, which has been named in many notable lists, including the 2021 The New York Times “Top Five YA Books of the Year,” and was awarded the 2022 Eisner Award for Best Graphic Novel Memoir, among other accolades. As she begins her graduate education in geology coming off a stint with the U.S. Geological Survey (USGS), Sankovitch hopes to combine her two passions and help publish comic books that communicate complex science in an approachable and engaging way. Here, Sankovitch answers a few questions about her path to science and comics, her thoughts on the future of science communication, and her favorite comic book superhero powers.

As a geoscientist and a comic book editor, you’ve pursued two seemingly divergent life paths! Can you share a bit about how you ended up in each space and how the two have overlapped?

Growing up on NASA, engineering camps, and fascinated with my dad's metallurgical engineering work, I had big dreams of “doing science” in school. However, I was unprepared for the reality of entering college for the first time with what I now know was undiagnosed ADHD. I crashed hard in my intro-level science and math courses and, with little support from my instructors in enormous survey classes, I concluded that I just wasn’t smart enough for STEM and majored in anthropology and theater.

Flash forward fifteen years: I was a successful managing editor for a thriving production company in Portland, OR, and making real strides in addressing my ADHD … but something was missing. At the time, I was leading a troop of Girl Scouts while also hosting geology-themed hikes with the Mazamas outdoors group. The joy I received from guiding those young women and the palpable excitement my hikers had for the geology I shared was a huge flashing neon sign. While I had found part of my calling with the storytelling inherent in my publishing work, the once-frustrated scientist in me wanted another chance. So, I went back to school for my geology degree, gained research experience and received my post-bac in geology in June 2021. After wrapping up a yearlong National Association of Geoscience Teachers internship with the USGS in Denver, Colorado, I joined the newest class of geology graduate students at the University of Nevada, Reno this past August.

I aim to combine my prior experiences with narrative storytelling and communications with my research interests in volcanology and geochemistry to be a bridge between research and everyday life; aiding in greater public understanding and assisting other scientists in effectively communicating their work. A public that grasps scientific impact translates to votes, investment, and progressive action on a global scale, thus innovative and compelling science communication is critical to public education.

What is it about comic books that make them ideal for getting people interested in science?

A public that grasps scientific impact translates to votes, investment, and progressive action on a global scale, thus innovative and compelling science communication is critical to public education.

One of the—if not the—universal languages of humans is narrative. It’s how our ancestors passed down knowledge, how we entertain ourselves, and how we remember vital information. We are also incredibly visual creatures, relying on sight for much of our day-to-day activities. Comics embrace simultaneous visual and aural (through text) information tracks to share stories at the reader’s pace. This allows for complex ideas to be broken down across multiple images and pages, and the extensive use of textual metaphors, all wrapped in an approachable, and visually enticing, package. Like prose books, comics can be written on any number of topics (and are!). What they offer science in particular, though, is the ability to quickly and appealingly demystify topics that may seem out of reach or irrelevant to non-scientists, or even scientists in other fields. They are quick to read, easy to disseminate online, and can be relatively straightforward to produce. All of this adds up to another powerful tool in the communications toolbox.

Why does representation of marginalized voices in the comic book industry and in the geosciences matter?

Just as in any other aspect of our lives, a diversity of voices and experiences gives us richer stories and deeper understanding. Having access to other perspectives expands our notions of what kinds of stories can be told and how science can be conducted. When we limit the kinds of people involved in any field, we limit the potential for growth and innovation for everyone.

What do you hope to bring to the Department of Geological Sciences and Engineering (and will comics be a part of that!?)?

I very much hope to be a vibrant, approachable and involved student in the department. I love collaborating, as I learn so much more from working directly with others, so I’m thrilled to be returning to the classroom again. If opportunities present themselves for using graphic storytelling (comics!) in service to the department, you can bet I’ll be first in line.

If you could have any comic book superhero’s power, what would it be?

How science fiction inspired the creation of the modern cell phone, from the Fleischmann Planetarium

Since the Fleischmann Planetarium’s opening in November 1963, the facility has fostered and conveyed the connection between science and imagination, communication and culture, art and astronomy.

Housed within the Planetarium's walls, visitors may find over 100 sci-fi, space-themed objects that encapsulate the influence of science on pop culture, and vice versa. One item, in particular, occupies a significant role in the development of modern technology: the Communicator from Star Trek!

The Communicator didn’t just excite fans with a sense of what the future might hold for them: it actually inspired engineers to boldly go and build that future. Martin Cooper, the engineer from Motorola credited with constructing the world’s first mobile phone in 1973, said it was Kirk’s iconic prop that inspired him to create it.

The Wand Company manufactures authorized reproductions of the “Star Trek: Original Series” Communicators, including the one now on display at the Fleischmann Planetarium.

Subscribe to Museum Monday and learn something new each week from the College of Science's three public museums, the W.M. Keck Earth Science and Mineral Engineering Museum, the Museum of Natural History and the Fleischmann Planetarium and Science Center. The series arrives in inboxes each Monday while University classes are in session and provides answers to everything from why snakes shed their skin to how a fossil is formed, and even explores the farther reaches of the universe!