How to drive in snow and other lessons 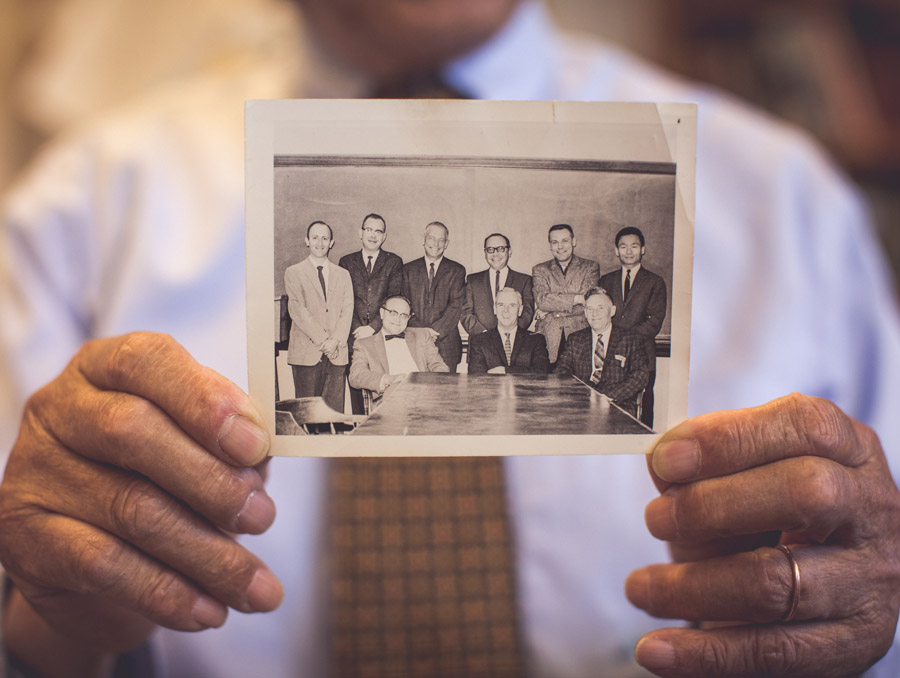 How to drive in snow and other lessons

I still remember the day I met Foundation Professor Emeritus Hyung Kyu Shin. It was a cold wintery day in Reno in January of 1993. It was the first day of my interview, and the chair of the Department of Chemistry came to the hotel to drive me to the chemistry building. Ill-prepared for the snow, I was wearing a thin wool suit and thin leather shoes that sucked up the snowmelt and immediately froze solid. In the lobby, I met a gracious then Professor and Department Chair Shin who was wearing a much warmer suit and shoes that stood a chance in the snow. He politely ushered me to his classic 1970 blue Ford Falcon station wagon for the short trip to campus. A larger than expected snowstorm clogged the roads overnight and overwhelmed Reno’s fleet of plows. The two-lane roads became one and one-half lane roads with the center berm of ice shared by cars travelling in both directions. Shin, with one foot on the brake and the other on the gas pedal, skillfully maneuvered the blue beast down the road tapping each pedal seemingly simultaneously only to swerve at the last second over the center bump whenever an oncoming car approached his beloved station wagon. All the while Shin methodically detailed the qualities of the Department of Chemistry and the expectations of its faculty. Fifteen minutes later, we parked near the basement of the chemistry building leaving me only ten yards of ice to traverse to the entrance. It was immediately clear that I wasn’t going to make it. My frozen shoes refused to stick to the ground, and those ten yards seemed like a mile. Without missing a beat, Shin took me by the arm, steadied me, and guided me into the building. Now, nearly thirty years later he continues to guide me and any other faculty member who has the privilege of knowing him.

Shin’s journey to the University of Nevada, Reno is quite remarkable. As a young man in Korea, his education and life were interrupted by the horrors of war. Yet, somehow, with the tenacity that we now know defines Shin, he managed to find an education where none was offered and little existed. Through his self-determination and his insatiable quest for learning, Shin earned the necessary credentials that enabled his acceptance into the University of Utah in 1957 to study chemistry. As you might imagine, the transition to American academics was difficult, but Shin persevered. Then, like now, students were required to take a breadth of classes including American history, the arts, humanities and, of course, science. Shin particularly enjoyed his chemistry, physics and mathematics courses—he found the language of science and math universal. Unfortunately for Shin, the rest of his classes were taught in English, for which his grasp at this point was tenuous at best. For example, in his anthropology class, he struggled with multiple choice exams where all the answers, at least on the surface, seemed plausible. Undaunted, Shin used his trademark tenacity and a pocket English-Korean dictionary to memorize the entire textbook and ultimately earned the top mark in his class.

Then, like now, school was expensive, but Shin was determined. To earn money, he cleaned classrooms at night for 80 cents an hour and accelerated his studies by taking 24 credits per quarter and attending summer school. As hard as this might seem, Shin found it enjoyable. Compared to the hardships he endured in Korea, the difficulties of a college education were, as Shin put it, “like a holiday.”

I recall reading his book while I was in my office in the chemistry building thinking: it’s okay; he’s just down the hall; he’ll make it out.

Shin earned his Bachelor of Science degree in 1959 and stayed for his graduate studies. After publishing six papers as a graduate student, he earned his Ph.D., remarkably, two years later in 1961. From 1961-1962 he held a postdoctoral appointment at the National Bureau of Standards in Washington DC, and in 1963 he was invited to Cornell University to work with Benjamin Widom and Peter Debye. After leaving Cornell, Hyung joined the faculty at the University of Nevada, Reno.

Shin arrived on campus in 1965 as an assistant professor. Not unexpectedly, he was a prolific researcher and published 30 single-author papers in his first five years. He was quickly promoted to associate professor in 1967 and to full professor in 1970. Shin served as chair of the Chemistry department twice, first between 1976 and 1980 and then again from 1991 to 1995. These were periods of tremendous growth for the department and University. Shin brought his trademark tenacity to departmental administration. He championed the expansion of the department’s research by hiring faculty and increasing graduate student enrollment. As chair, Shin mastered the art of nuanced administrative advocacy. At University events and functions, Shin took every opportunity to shed a positive light on the department and its faculty. However, he could also be a fierce negotiator. Rumor had it that he would often find a seat in the halls of Clark Administration and patiently read a manuscript hoping for a dean or provost to unwittingly venture out of their office only to find Shin lying in wait for an impromptu conversation.

Throughout his career, Shin distinguished himself as an outstanding theoretician and prolific researcher. He is best known for his work using trajectory calculations to investigate the dynamics of gas-phase and gas-surface reactions and the energy flow in molecular systems. To date, he has published more than 210 manuscripts in highly respected journals in chemistry and physics. Shin’s papers are published in several major journals, including the Journal of Chemical Physics, Chemistry Physics Letters, the Journal of the American Chemical Society, and the Journal of the Korean Chemical Society. He wrote invited publications, themed contributions, reviews and groundbreaking research papers. The College of Science collected all of the publications of which we were aware in 2019 and bound them into a two-volume set. And it may come as no surprise that the collection is now incomplete at both ends. I originally believed that his first paper was published in the Journal of Physical Chemistry in 1959. Come to find out, this was his second paper; the first was published in Korea some years earlier, reproducing the famous chemical origins of life experiment. Now some 60 years later, he continues his theoretical chemistry investigations, and in 2021 he published his latest study of the “Vibrational energy Flow in the Uracil-H2O Complexes” in the Journal of Physical Chemistry. This level of productivity is not unusual for Shin. He’s maintained the same work ethic throughout his career. In 1975 the University recognized Shin’s distinguished research career by selecting him as the very first recipient of the University Outstanding Researcher of the Year Award. In another first, Shin was also named as a University Foundation Professor in 1984—also the year of its inception. Most significantly, in 2003 Shin received the University’s highest honor—the University Distinguished Faculty Award, which honors the broad and lasting achievements of a single faculty member.

On top of his research accomplishments, Shin is known for his excellence in the classroom. Famous for his exquisite boardwork, he was known to provide a day’s lecture full of long derivations without using notes. The proofs were elegant, and the presentations were flawless. Students quickly learned to write everything down, because if it was on the board, it had to be important. His excellence in teaching was recognized by the broader campus community who twice awarded him the Alan Bible Award for Excellence in Teaching, the first in 1986 and then again in 2000. In recognition of his illustrious career and as an example to others, Jeffrey S. Thompson, then Dean of the College of Science, in 2005 established the Hyung K. Shin Award for Excellence in Research. Thanks to the generosity of many of his former students and colleagues, the award is endowed and remains an eternal marker of Shin’s enduring legacy of scholarship, teaching and service at the University.

Shin never retired. In 2000 he selflessly gave up his formal teaching responsibilities, and therefore his University salary, so the Department could hire the next generation of theorists. In recognition of his research-active status the Provost’s office created a “Distinguished Research Professor” position so he could continue his theoretical research unfettered. Unfortunately, that title was not universally recognized by HR, and Shin’s email and library access kept getting cut off much to his great consternation. Nonetheless, Shin remained active in the department and on campus and ultimately accepted the title of Emeritus Professor with all the rights and privileges pertaining thereto, which includes, notably, email access.

While researching Shin’s publication record, I also learned that he published a book in 1955, “Atomic Energy Remakes Our World,” which he wrote while in a foxhole during the Korean War. It is an amazing testament to Shin’s determination as a young man under such horrendous circumstances. Although I could not find a record of it in any library, Shin showed me an original copy, the pages yellowed and crumbling, written in Korean, and all of the artwork and scientific diagrams were hand drawn by Shin. Fifty-five years later Shin mustered the strength to share his first-hand account of the Korean War in his second book, “Remembering Korea 1950, a Boy Soldier’s Story” where he recounts his story as a 16-year-old refugee with no resources or support who volunteers for the South Korean army only to suffer unimaginable hardships and atrocities. Having lived a life sheltered from the horrors of war, I found his story gut-wrenching and heartbreaking. I recall reading his book while I was in my office in the chemistry building thinking: it’s okay; he’s just down the hall; he’ll make it out. Whether it was a miracle, divine intervention or some sequence of random events in a probabilistic world, Shin did make it out with his humanity and dignity intact. His friends and colleagues are lucky to know such an honorable man, and I am humbled to be included in this group. Today, like the first day I met him, he remains a source of stability within the Department of Chemistry and continues to guide those around him. Thank you, Hyung, for your support that snowy day many years ago and every day since.

Thank you Professor Shin for continuing to give back to the University by funding the following endowments: