As flowers start to bloom and the weather warms, garter snakes begin to emerge from their hibernations. 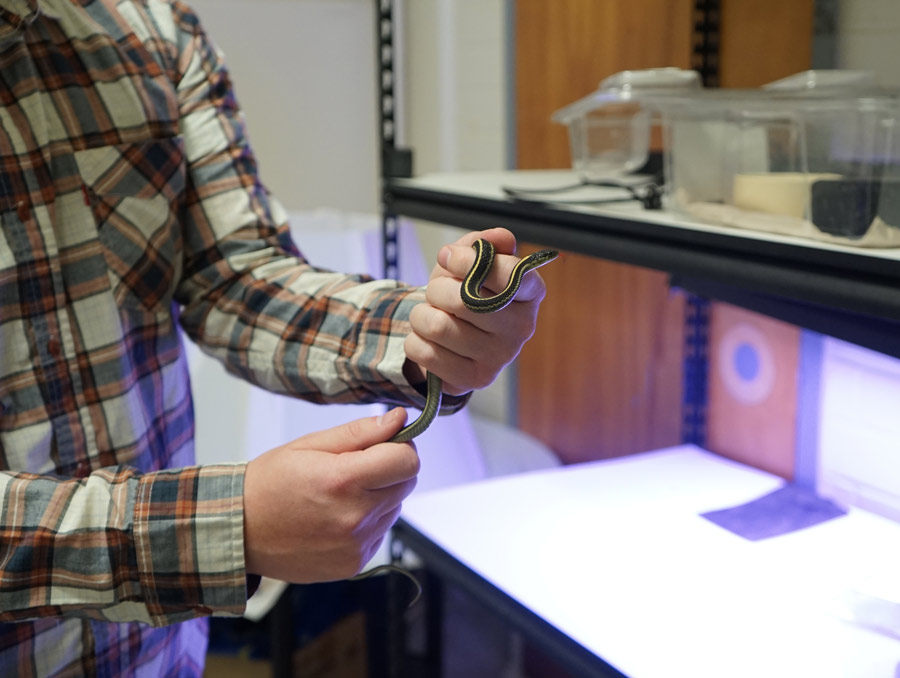 As flowers start to bloom and the weather warms, garter snakes begin to emerge from their hibernations.

Garter snakes are native to Nevada and the West. The snakes may hibernate in winter, and if they do, they typically emerge in early spring or late winter. There are multiple species that live in our region, but the most common garter snake around Reno is Thamnophis elegans—commonly known as the terrestrial garter snake. Evolution, Ecology and Conservation Biology doctoral candidate Joshua Hallas researches the phylogeny, or evolutionary history, of these abundant and ecologically important snakes. Hallas recently published two papers with his doctoral advisors, Associate Professors of biology Thomas Parchman and Chris Feldman, about the evolutionary history of all garter snakes and population structure in Thamnophis elegans in the West.

Hallas’ papers examined how biogeography, environment, and ecological specialization impact diversification of the different species of garter snakes. For example, feeding patterns influenced the morphological evolution of the snakes, particularly in their head shape. Snakes with more narrow heads are able to specialize on aquatic prey, while those with broader heads have a more terrestrial diet. The narrow head allows snakes to hunt in creeks, rivers, and lakes more easily. The papers elucidated relationships between species that have been difficult to explain previously. The large amount of data, samples from over 600 snakes, provided greater clarity. The research techniques and expertise at the University are what drew Hallas to doing his doctoral studies here.

“I wanted to learn the molecular techniques we use here,” Hallas said. “We use a method that samples parts of the entire genome, called double digest restriction-site associated DNA (ddRAD) sequencing. Using that technique, you can gather much more data than what I was able to collect during my master’s.” ddRAD sequencing is a less labor intensive and cheaper DNA sequencing process, and it provides much more data. “What took me two weeks here would have taken me years using traditional Sanger sequencing. And more data allows you to establish finer and more robust evolutionary patterns.”

Hallas has extensive experience with the garter snakes of the region. He has encountered many for his research and has enjoyed reptiles since he was a kid. Hallas provided some information for a brief guide to identifying and understanding the scaly Reno residents.

The snake’s appearance is unique, with a black body and yellow stripes along its back and both sides, and they are typically one to three feet in length. “There can be some color variation,” Hallas said. “Females are bigger than males.”

Garter snakes don’t pose significant danger to humans. Some species do have a mild venom that helps them capture prey, but it doesn’t affect humans. “It might bite you, but it will mostly be shocking,” Hallas said. “They’re more likely to musk you like a skunk, it’s pretty gross. Most water snakes musk by excreting an oily substance.”

Where do garter snakes live and what do they eat?

Garter snakes live throughout the Sierra Nevada and Great Basin. “During the winter, the snakes move into hibernacula in large groups under houses, rocks, rubble, somewhere that will stay cool and stale but will not freeze. After hibernating, they spend time in meadows, creeks, and ponds, and hiding under rocks and wood when not actively hunting,” Hallas said. The snakes are expert swimmers, and Thamnophis couchii—the Sierra garter snake—another species found in the region, can hunt underwater by holding their breath. Garter snakes eat rodents, birds, amphibians, invertebrates and fish. “They’re very active hunters. Thamnophis elegans has one of the most generalist diets of garter snakes in the region,” Hallas said.

What do I do if I see a garter snake?

“Just leave it alone. They’re completely harmless,” Hallas said. If one slithers into your home, Hallas recommends shooing it back outside or putting it into a bag if you’re not close to a door. “If it’s in your yard, it will go away.”

The Museum of Natural History on campus is home to several reptiles, including lizards and snakes. Two species of garter snakes and a rubber boa, native to the Tahoe area, are housed at the museum.