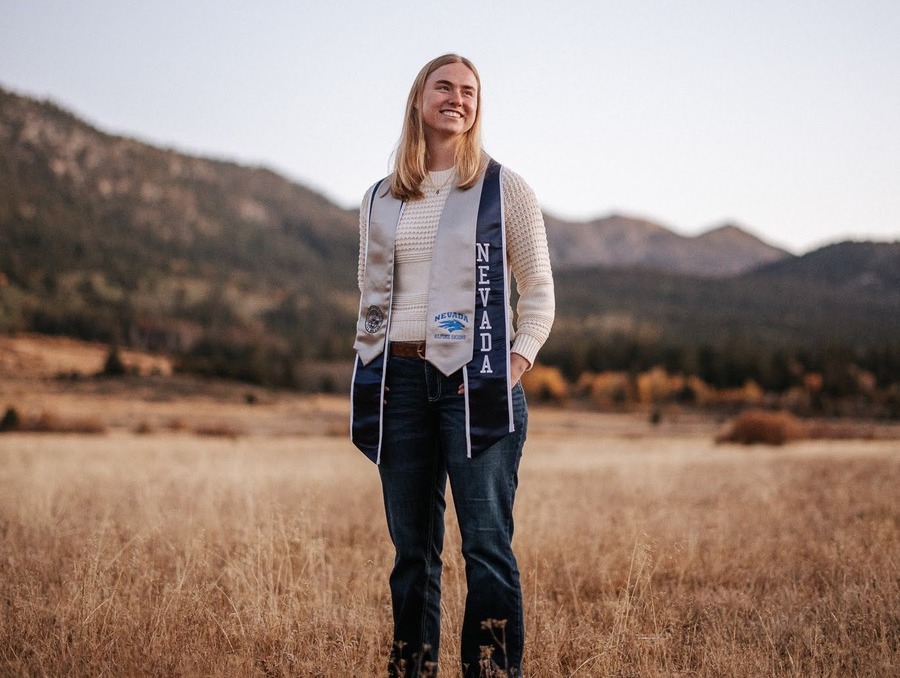 Elsie Childress, who will receive the Herz Gold Medal during Saturday’s 2022 Winter Commencement at Lawlor Events Center, has used her time as a student at the University in the best way possible: Always helping others.

The Herz Gold Medal is bestowed upon the graduating senior who has the highest University grade point average with the most letter-graded credits (beyond 120) that have been earned at the University.

Childress, from Garden City, Idaho, will graduate with a double major in rangeland ecology and management and environmental science in the College of Agriculture, Biotechnology (CABNR) and Natural Resources, and was a student in the Honors College.

She was a member of the University’s alpine ski team and represented the University at the U.S. Collegiate Ski Association National Championships three times. She was president of the largest club on campus, the Winter Sports Club, as well as CABNR Ambassadors.

Elsie is also the 2022 Winter Senior Scholar for CABNR and was 2022’s Outstanding Senior in rangeland science in CABNR.

Following a career at Capital Senior High School where she maintained a 4.0 GPA, was a member of the National Honor Society, Ski Club and Symphonic Orchestra and was a National Merit Scholar, Childress came to the University to be part of the alpine ski team and because of the University’s location, which is only about a half-hour to a 45-minute drive from some of the best skiing in the world.

She had grown up in a region of the country where rangeland issues and the very real notion of a “sagebrush ocean” informed her decisions about what academic major to pursue. As a ski racer she had traveled throughout the mountain west, through Idaho, Utah and Wyoming, and had developed an appreciation and love of the region’s beauty. When she learned about CABNR’s rangeland management major during orientation, she knew that was an academic major she wished to learn more about.

Her Senior Scholar mentor, Dr. Tamzen Stringham, who has long had a reputation on campus for positively influencing her students and exciting them about her teaching subject matter, was instrumental for Childress in taking her learning to the next level. In Stringham’s restoration class, Childress traveled to central Nevada, collected rangeland data, and created a restoration plan.

Once she graduates on Saturday, Childress is looking forward to serving Nevada’s farmers and ranchers as she begins her career with the Natural Resources Conservation Service, an agency of the U.S. Department of Agriculture.