Researchers in the Department of Chemistry were awarded $2.5 million to study molecular magnetism. 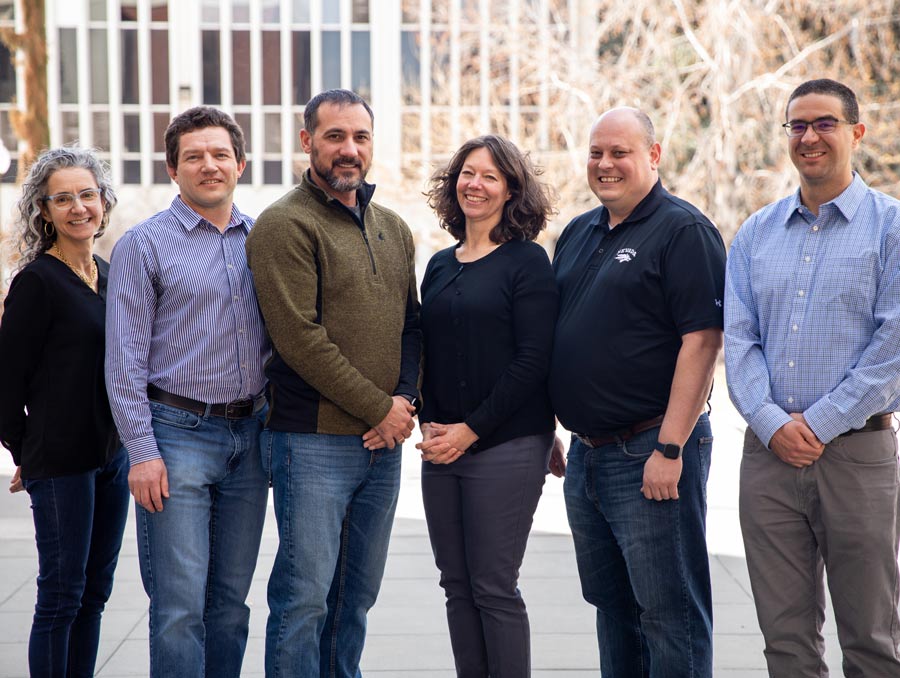 Researchers in the Department of Chemistry were awarded $2.5 million to study molecular magnetism.

Researchers in the Department of Chemistry were recently awarded a $2.5 million grant to develop a new Department of Energy (DoE) Center to design molecules for quantum information science (QIS) applications. The grant aims to support fundamental science that will help researchers to improve quantum systems, allowing for more widespread use and more complex problem solving.

QIS is a broad field that encompasses quantum computing, simulation, communication and sensing (taking measurements). And while quantum computing has the potential to complete calculations in minutes that would take years on a classical computer, it still has a way to go before we see quantum computers on our desks, said Sergey Varganov, an associate professor in the chemistry department and the project director.

“The state of quantum computing is very exciting right now,” Varganov said, but added that it’s not very practical yet. Varganov and a team of researchers are working to make it more practical by improving the physical technologies used in quantum computing and other QIS applications.

In classical computers, information is encoded in bits, small units of information that can be in the states “0” or “1”. In contrast, quantum bits, or qubits, can exist in two mutually exclusive states at the same time. This phenomenon, called quantum superposition, allows an array of qubits to store an exponential amount of information. The classic thought experiment of Schrödinger’s cat provides a good analogy for superposition. The thought experiment says that if there is a cat placed in a box with a fifty percent chance of being alive and a fifty percent chance of being dead, the cat is presumed to be in both a dead and alive state at the same time--until the moment the box is opened, and the cat exists in only one state. Using quantum algorithms operating on qubits, quantum computers can simultaneously perform a very large number of calculations, dramatically outperforming classical computers.

While several physical systems of qubits have been proposed, single-molecule magnets are very promising. This is because chemists can assemble single-molecule magnets in large arrays needed for many QIS applications. The challenge is to design molecular magnets that are stable enough to perform quantum computations. The instability comes from spin relaxation and decoherence that happen because electron spins interact with “noise” that disrupts their states. Noise can come from many sources, such as electromagnetic fields or light. Slowing the rate at which spin relaxation and decoherence occur is crucial to making quantum computing more practical.

“We are looking at the individual molecules that are building blocks of these molecular arrays. If we find promise in the individual blocks, it should be relatively easy to compose arrays out of them,” Varganov said.

Researchers will be utilizing both theory and experimentation in the development of the design guidelines for molecular magnets. Varganov is a theorist among the group and uses quantum chemical methods to predict the properties of single-molecule magnets. Natia Frank, an associate chemistry professor who studies molecular magnetism, will measure magnetic properties of single-molecule magnets validating the theories developed by her colleagues. Frank will also serve as the communication and diversity coordinator for the center.

Interdepartmental interaction is important, Varganov said, so that, “you know who can contribute and what they can contribute.” If the center is expanded, Varganov hopes to bring in faculty members from the Department of Physics who work on QIS research.

“It’s also important to have some idea of what people do within the whole University,” Varganov added. David Cantu, another theorist on this project, hails from the Department of Chemical and Materials Engineering in the College of Engineering. Cantu will study how molecular magnets interact with their environments.

Varganov also sees this center as an opportunity to make Reno into a quantum version of Silicon Valley. “It would be nice to have some quantum computing start-ups on this side of the Sierras,” he said.

Senator Catherine Cortez Masto announced the grant in June, stating that the center aligned with her "Innovation State Initiative."