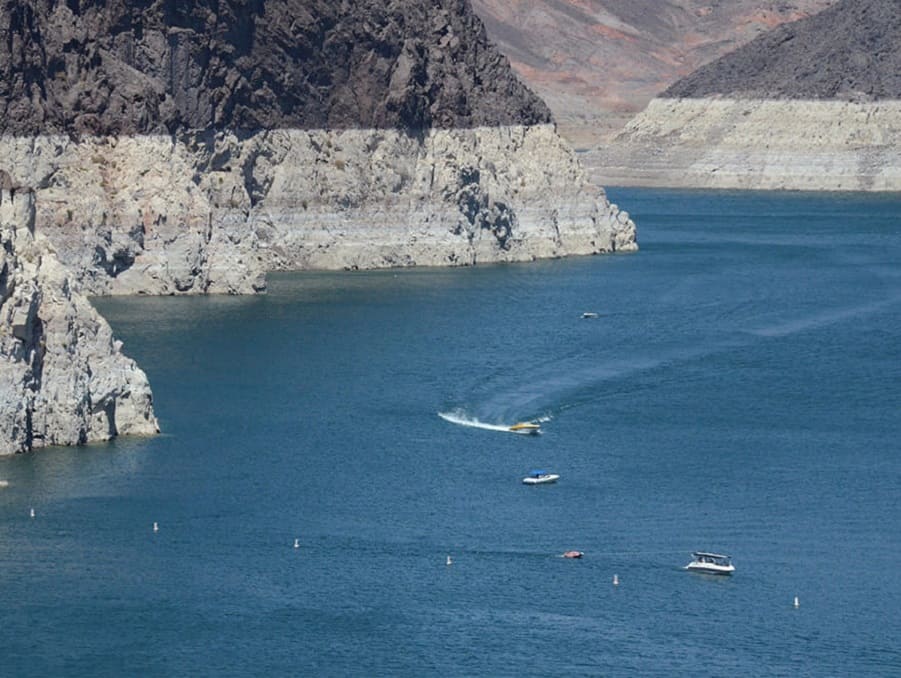 Southern Nevada will be getting at least 7% less water from the Colorado River, as the federal government restricts water allocations due to falling water supply. Scientists expect temperatures to continue to rise and water supply to decrease in the coming decades. Creative strategies and approaches will need to be applied to address the reduced supplies, three professors at the University of Nevada, Reno suggest in a series of blog posts about the Colorado River, the drought and its effects on Nevada. The professors study the climate and politics of water in Nevada and the drought impacts of the Colorado River.

The Climate Prediction Center long-range outlook based on the U.S. Drought Monitor shows continued drought for the next three months in much of the West. It's not looking good for the Colorado River, one of the main sources of water for Las Vegas, as the federal government has been forced to institute policies for the first time that limits the amount of water going to the partners in the Colorado River agreement.

Drought on the Colorado River has been in the news over the past year. In August, the U.S. Bureau of Reclamation’s water-level forecasts for January 2022 indicated that the water levels in Lake Mead, one of the system’s major reservoirs, would stay below 1,075 feet elevation. Because of how low water levels have fallen, a Tier 1 shortage was declared. This means that southern Nevada, which gets about 90% of its water from the Colorado, will have to make do with 7% less water.

But, steadily dropping river flows and reservoir levels are not exactly a surprise. Scientists have long warned that higher temperatures, especially if they coincide with a drought, could stress water supply in the Colorado Basin and force us to be more thoughtful and creative in how we use and manage water. The past year has underscored that message.

Scientists expect temperatures to rise in the coming decades. There is still some uncertainty about just how big a dip those higher temperatures will take out of the Colorado River, but as it warms, the overall amount of water available will drop and droughts will be worse than they would otherwise have been. To meet Nevada’s current and new water demands, we will need innovation in water policy and management, new technology and conservation strategies, and the research to support those changes.

In August 2021, the Colorado River captured the attention of the nation. In a first-of-its-kind decision, the federal government declared a water shortage on the river, which provides 90% of southern Nevada’s water supply. Mandatory water delivery cuts, known as “Tier 1” reductions, followed for Nevada and Arizona, as well as for Mexico. Paired with expectations of a drier climate, these cuts have catalyzed a conversation about how the region’s water policies – and assumptions about future water availability – must be adapted.

Elizabeth Koebele’s research team at the University of Nevada, Reno is leading efforts to better understand how collaborative water sharing processes used over the last 20 years in the Colorado River Basin may provide insight into the renegotiation process and the development of long-term solutions to one of the biggest problems facing Nevada and the Western U.S.

Large-scale water reuse investments target drought in the West
Investments such as $1.2 trillion infrastructure law passed by Congress are key to the future

Most Nevadans are accustomed to having potable water on demand, regardless of season or drought. As drought threatens urban water supplies, there are two basic water management strategies: reduce demand and/or increase supplies. Reuse of highly treated municipal wastewater, known as reclaimed water or recycled water, is becoming a more common supply-side solution to water scarcity.

According to the USGS, each Nevadan, on average, uses about 197 gallons of potable water per day (compared to the national average of 82 gallons per day). Much of the water used indoors ends up as wastewater that is flushed down our toilets, sinks and showers. In Washoe and Clark Counties, reclaimed water is already used to irrigate parks, golf courses and other green space. In southern Nevada, any treated wastewater that is returned to Lake Mead earns “return flow credits” for the water authority, which means that for every gallon of treated wastewater that enters the reservoir, a gallon can be removed for later use. Additionally, researchers at the University of Nevada, Reno are currently collaborating with local agencies to explore the feasibility of a potable water reuse project. These are just two of the creative ways that reclaimed water can augment urban water supplies in Nevada.