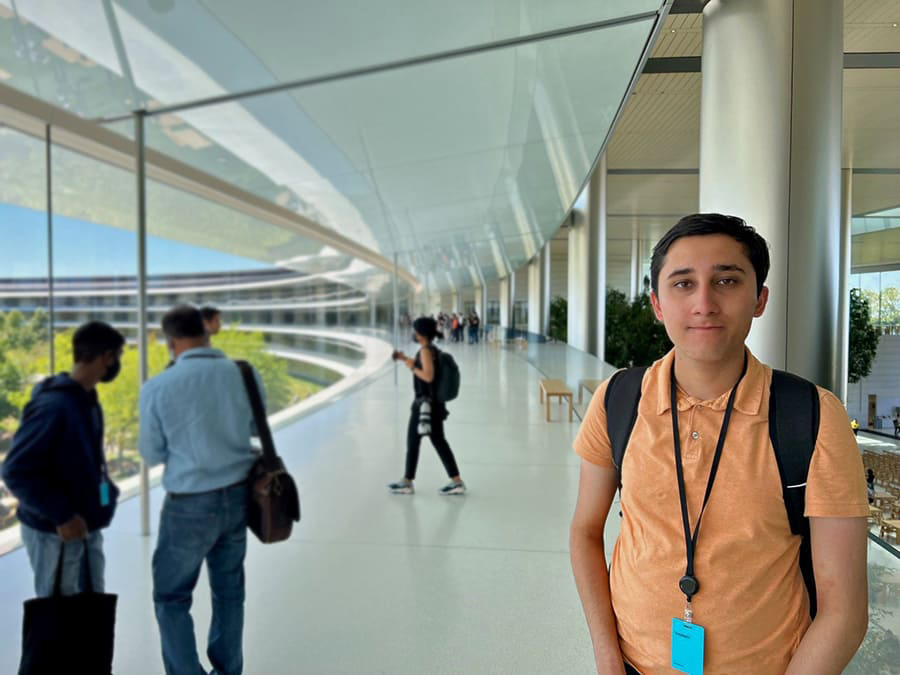 This summer, University of Nevada, Reno sophomore Vedant Malhotra was selected as a winner of the Apple Worldwide Developer Conference Swift Student Challenge. He is also a participant of the App Development with Wolf Pack program hosted by the Digital Wolf Pack Initiative.

Malhotra’s passion for computers, coding and developing computer applications began in 2014 when Apple announced the programming language Swift, and he saw an announcement for the WWDC scholarship. He wanted to see what he could build, and has entered the competition every year since.

“I applied for the Swift Student Challenge competition in 2021 and didn’t win so I started drafting and working on ideas for the next year trying to think of what could be fun for the event using Apple devices,” Malhotra, a computer Science and Engineering major, said. “It was a great year developing and attending the app development workshops in the Knowledge Center.”

For the 2022 challenge, students were tasked with creating a three minute interactive scene with a Swift Playgrounds app project on the topic of their choice to showcase their passion for coding.

“My submission was based around a story that puts the user on a mission to save WWDC,” he said. “In the scenario, a character named ‘Craig’ forgets to update his iPad to iPadOS 16, and he needs the new software to present. He reaches out to the user for help. Within the app, there are three mini-apps — DeviceRestore, iPadOS 16 preview, and WWDC 2022. The app uses SwiftUI, UIKit, ARKit, PencilKit, and QuickLook. SwiftUI powers the main interface of the app, and ARKit and PencilKit power the iPadOS 16 preview and the WWDC 2022 mini-apps.”

Through the interactive app, the user is prompted to guide Craig in updating his software so he’s ready for his presentation. The app is meant to encourage Apple users update their devices, by conveying the importance of adopting new technologies with the latest software updates.

“It’s my first win, and I got the scholarship!” Malhotra said.

He received a WWDC scholarship for 2022, exclusive WWDC22 outerwear, a customized pin set and one year of membership in the Apple Developer Program. Every year, Apple rewards talented students and STEM organization members with an opportunity to attend the conference as a scholarship winner. In addition to the online conference, Apple hosted a special day for developers and students at Apple Park in June to watch the keynote and State of the Union videos together, along with the online community.

As a WWDC Swift Student Challenge winner, Malhotra received exclusive WWDC22 outerwear, a customized pin set and one year of membership in the Apple Developer Program. Apple hosted a special day for developers and students at Apple Park in June to watch the keynote and State of the Union videos together, along with the online community.

Malhotra visited Apple Park in Cupertino, joining the worldwide developer community for an in-depth look at the future of Apple platforms.

While Malhotra has a long-time interest in coding and app development, he said anyone can learn using their new iPad from the Digital Wolf Pack Initiative and by attending the free App Development with the Wolf Pack courses. He attended app development workshops at the Knowledge Center throughout the spring semester as a freshman.

“It’s insane what you can do with an iPad, the sky is the limit,” he said. “There’s a lot to do in the app development classes and you can pick-up a lot more like catching-up on new features, such as accessibility changes. There is always something new to learn.”

Having the Digital Wolf Pack Initiative as a resource was instrumental in Malhotra’s success. The Digital Wolf Pack Initiative, going into its second year with Apple, brings iPad Air, Apple Pencil and Smart Keyboard Folio to all incoming University of Nevada, Reno freshmen and transfer students and brought iPad to more than 200 University faculty since the fall of 2021.

“I had the pleasure of meeting Vedant during a pitch call for an app he created with his classmates Shayan Hosseini and Joseph Jacobson, a UNR Mental Health app,” Marianne Barrea, acting project manager for the digital initiative for the Provost’s Office, said. “He showed a real understanding of the platform and was able to break it down to a usable interface. It was very impressive. Having received a Digital Wolf Pack Initiative device and attending the App Development with the Wolf Pack course, I think Vedant was set for success and was able to really focus on the creativity piece.“

Last school year, the University developed "App Development with the Wolf Pack" courses that allow students from any discipline to create their own app using Swift, a powerful and intuitive programming language for iOS, iPadOS, macOS, tvOS and watchOS. In addition to his class load of 17 credits in the Spring semester, Malhotra took these app development courses on Thursdays at the Knowledge Center.

“There are multiple sessions throughout the week, from beginner through advanced. It was really fun using the iPad and learning all it could do,” Vedant said. “The iPad is very useful, along with the Apple Pencil and Magic Keyboard, to organize what I do. It has changed the way I study. I just carry this, it’s the only one thing I need. I use the iPad for presentations, it helps with deadlines and communicating with professors.”

Vedant keeps busy with other web-based projects as well. He’s webmaster for Associated Students of the University of Nevada, works on the online Sagebrush newspaper, helped redesign the Wolf Pack Radio website as well as promoting activities and publications for ASUN. He now has six apps on the App Store, including a web browser that organizes and manages open tabs, and an upcoming music app personalized for what a person likes to listen to.  In addition, on his website he just launched LockPod in beta testing, which utilizes the new widgets feature in iOS 16 to pin music items on the Lock Screen. He had more than 1000 downloads within 24 hours of beta release.

His most recent app on the App Store is 3things, which is an easy way for a person to track their three most important things. Information on all six apps can be found on his website.

The app development courses are open to all students and faculty across the University, not just those who have received the iPad Air through the Digital Wolf Pack Initiative.

“What is unique about our coding curriculum, App Development with the Wolf Pack, is that you really do not need any experience in coding to be successful,” Barrea said. “Many people automatically shy away from app development and coding because they feel they do not have the skills or the right educational background to create or produce an app. What we are really focused on is encouraging students from all disciplines to explore app development and work in teams to gather a range of skill sets all working toward a common goal.”

Last spring, the University’s student chapter of the Association of Computer Machinery hosted a hackathon, and several students, including Vedant, who have taken the App Development with the Wolf Pack Swift Playgrounds courses participated and won first place in the category for novice. They were all freshmen.

The digital initiative was designed to provide access through a common platform for all University of Nevada, Reno students, equipping them with tools to help them succeed. The digital literacy curriculum, including this interdisciplinary app development curriculum, also provides students with skills for their future careers.