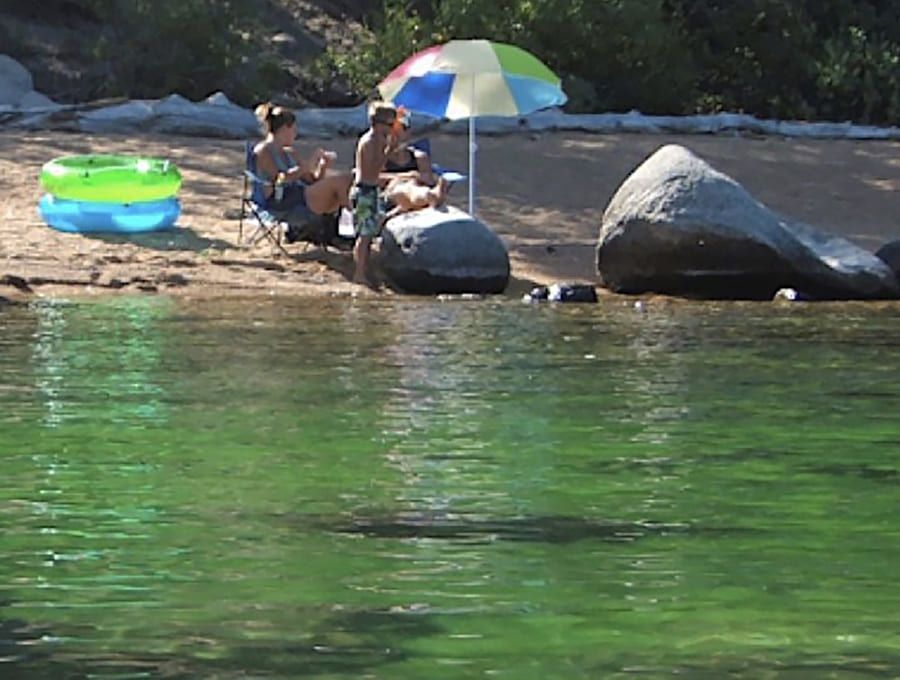 Many of the world’s most iconic clear lakes are degrading at an alarming rate – shallow, nearshore lake bottoms are being carpeted by bright green fronds of slimy algae, especially during the summer. These filamentous algal blooms, known as FABs, need lots of light, so they occur at lake edges where people want to swim and play.

Scientists are unsure why FABs are suddenly showing up in remote mountain lakes, as well as in some large lakes such as Lake Tahoe (USA), Lake Baikal (Russia) and Lake Wakatipu (New Zealand), but an international group of lake scientists is ready to tackle the problem.

In a scientific article published this week in BioScience, “Blue waters, green bottoms: benthic filamentous algal blooms are an emerging threat to clear lakes worldwide,” scientists from around the world explore how nutrient pollution, climate change, loss of aquatic animals that eat algae, and invasive species contribute to the increased occurrence of green bottoms.

Co-author and Professor Sudeep Chandra at the University of Nevada, Reno noted, "The interdisciplinary, international team of scientists that met together at Lake Tahoe impressed upon me the need to develop a science-based framework to guide our future understanding of FABs. The paper highlights the factors from local to global pressures that might contribute to this profusion of algae on lake bottoms.”

Lead author Yvonne Vadeboncoeur, a professor at Wright State University, is particularly concerned that widespread use of pesticides, or other stressors, may be killing aquatic insects, allowing the algae to grow unchecked instead of being consumed by grazing insects that then provide critical food for fish. She also thinks the public could play a role in helping scientists document the occurrence of FABs.

“Scientists tend to study lakes from boats in the middle of the lake, but the pristine shorelines that are afflicted by these green bottoms are the same places that attract people for swimming, fishing and boating," she said. "We see the public playing a crucial future role in documenting the occurrence of this emerging change in lakes.”

It is normal for scientists and the public to immediately think that, like other algal blooms, FABs are caused by excessive nutrient runoff from sewage, lawns and farms, but often FAB lakes have extremely low nutrient concentrations in the water.

Professor Marianne Moore, from Wellesley College, who conducts research in Lake Baikal, Russia, the largest lake in the world, said, "I was not surprised that human sewage contributes to FABs in Lake Baikal, but the prevalence of FABs in other clear-water lakes of the world amazed me, especially those where the cause(s) remains a mystery."

Chandra points out that FABs are occurring in clear mountain lakes in the western United States because invasive species are replacing native species, water temperatures are increasing and summers are longer. In Lake Tahoe, the increasing occurrence of extensive filamentous algal blooms in shallow waters is tied to reduced snowpack and changes in underground water flow associated with climate change.

Although it is concerning that we don’t yet know why nearshore habitats are greening in clear lakes, these profound changes open up great opportunities for improved understanding of lake ecosystems. Dr. Simon Stewart, an early career scientist at the Cawthron Institute in New Zealand, is concerned that FABs are occurring in essentially pristine lakes.

"Off-shore water quality monitoring, the method used for over a century, is not detecting near-shore degradation," he said. "Nearshore areas may be sensitive, previously overlooked, early warning indicators of ecosystem change; we are developing new approaches to better understand nearshore habitats.”