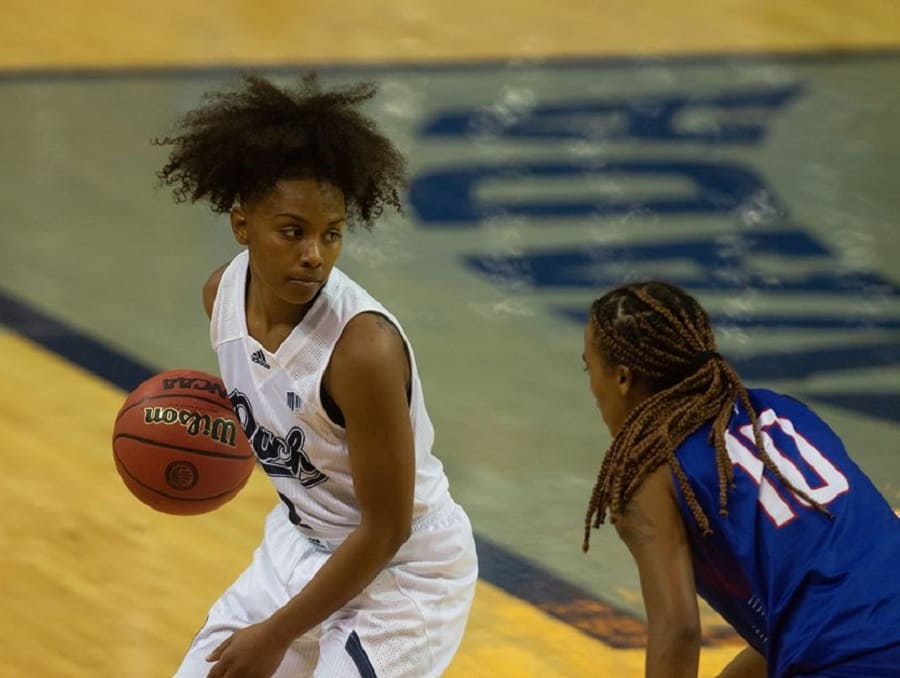 Nevada tips off its 2021-22 season with a home game against the Saint Mary's Gaels on Wed., Nov. 10 at 5:30 p.m. ... A live stream will be available online on the Mountain West Network ... Larry Burnett will have the call in Northern Nevada on CBS Sports Radio 94.1 FM and 1450 AM with a 20 minute pregame show prior to tipoff ... Fans can also listen live online via TuneIn or on the TuneIn app ... Live stats are available at NevadaWolfPack.com/wbballls ... Nevada cruised to a 73-49 exhibition win over Fresno Pacific on Oct. 31... Da'Ja Hamilton led all scorers with 23 points, including going 5-for-7 from beyond the arc... Nevada hits the road for a Nov. 14 contest at Santa Clara.

Nevada and Saint Mary's meet for the sixth time on Wednesday. The Pack holds a 3-2 series edge over the Gaels, winning two of the last three matchups. The series dates back to Dec. 15, 2002 when the two programs faced each other in Lawlor Events Center. The Pack cruised to a 72-55 victory over the Gaels. Nevada defeated the Gaels in 2011 and 2019 before Saint Mary's defeated the Pack in 2020.

Nevada head coach Amanda Levens earned career win No. 100 on March 3 as the Wolf Pack defeated Air Force, 59-56. Levens took over the Wolf Pack in 2017-18. Her two head coaching stints include four-plus seasons at Nevada and four seasons at the helm at Southern Illinois, Edwardsville (SIUE). In both head coaching stints she took over struggling programs, attempting to rebuild. Levens led Nevada to a fifth-place Mountain West finish in 2020-21, the program's best finish since the 2013-14 season.

Nevada recorded its best conference finish since 2013-14 last season after finishing Mountain West play with a 9-7 record and securing a fifth-place finish. For the first time since 2013-14, the Pack earned a first round bye in the 2021 Mountain West Conference Tournament. Nevada was picked to finish 10th in the conference last year, but proved doubters wrong.

Graduate transfer Kylie Jimenez was named Preseason Mountain West Newcomer of the Year on Oct. 13. Jimenez, a Colorado native and grad transfer from Portland State, is the sister of Wolf Pack guard Alyssa Jimenez. Kylie Jimenez played a huge role for the Vikings the past four seasons as she tied the school record with 122 starts, which is every game she played in. Throughout her career, the 5-foot-6 guard earned many accolades including Big Sky Freshman of the Year, All-Big Sky Third Team twice, an All-Big Sky honorable mention, a Big Sky Player of the Week honor, and was named to the 2019 All-Big Sky Tournament team. She helped her team to a 25-win season during her sophomore campaign, a Big Sky Tournament Championship and an appearance in the NCAA Tournament.

In addition, Kylie and her sister Aly will be reunited on the court again this season. Aly played a prominent role for the Wolf Pack as a freshman, but was sidelined with a torn ACL as a sophomore. Aly looks to pick up where she left off heading into her redshirt-sophomore campaign.

Junior Da'Ja Hamilton established herself as one of the premier players in the Mountain West during the 2020-21 season, earning her all-conference honors. In the series finale at UNLV, not only did she hit the game-winning 3-pointer with 1.3 seconds on the clock to break a 70-70 tie, but she finished the contest with a career-high 32 points, the first 30-point game of her career. Hamilton's 32 points at UNLV rank as the third-most points in a single game by a Mountain West player this season. She connected on 12-of-23 from the field and was 4-of-7 from the 3-point line, but really caught fire in the fourth quarter. Hamilton's first triple of the game was a half court heave at the buzzer just before halftime, sending Nevada to the locker room trailing by only two. Her other three triples all came in the fourth quarter, helping Nevada to keep pace with UNLV, and eventually, seal the win for the Wolf Pack.

She followed that performance up with two near 20-point games at Boise State, scoring 19 in game one and 18 in game two. Against Air Force, she scored in double figures in both games, and led the team with 17 points in game two, including three 3-pointers.

In Nevada's exhibition game on Oct. 31, Hamilton poured in 23 points, five rebounds, four steals and one assist while going 5-for-7 from beyond the arc.

Morita was officially named assistant coach on Aug. 9 after spending the previous seven seasons at Robert Morris. At Robert Morris, the Colonials made five Northeast Conference (NEC) Championship Games, winning three titles in 2016, 2017, and 2019. RMU went 133-78 (.630) since 2014-15 and notched 91 wins in league play. The Colonials also have won four consecutive NEC regular-season titles over that span. Prior to Robert Morris, Morita was an assistant coach for the Shiga Lakestars, a professional men's basketball team in the Basketball Japan League. Morita was responsible for recruitment of international players, coordinating team travel, scouting, and also served as the team's interpreter. Morita was the head coach at Kansai University in Osaka, Japan from February 2011 through April 2013. She led her squad to its first Sweet 16 appearance in both the All Kansai Women's Basketball Championship and the Western Japan Women's Intercollegiate Basketball Championship. Kansai also had second-place conference finishes in 2011 and 2012, posting marks of 7-1 both seasons with Morita at the helm. Morita began her coaching career at Arizona Western College in Yuma, Ariz., where she was an assistant during the 2009-10 season. Morita was responsible for all aspects of video, breaking down individual performance, opponent scouting, and film exchange. In addition, she monitored student-athlete academic progress, team travel, and budget. Morita graduated in 2007 with a degree in commerce from Kansai University, where she was also a student assistant with the women's basketball team. She went on to do her post-graduate work at Idaho State, earning a Master of Physical Education in athletic administration in 2009.

Shaw, a native of Reno, Nev., is no stranger to the women's basketball program, having served as a scout player during the 2019-20 season and student manager during the 2020-21 season. During his undergrad, Shaw obtained his bachelor's in marketing. Shaw played college basketball in Alberta, Canada, at Olds College where he was named conference Rookie of the Year after averaging8.7 points, 8.1 rebounds and 2.8 assists. Shaw's father, Richard, is a former basketball coach in the Reno area and his older sister, Shalen, played college basketball at Boise State.

Reier, a Tuscaloosa, Ala., native, played two years at Shelton State Community College before finishing her last two years at the University of Hawai'i. At Shelton State, Reier was a part of a squad that went 70-4 over two seasons, including a 36-1 record during the 2017-18 season. During the 2017-18 season, Reier started in all 37 games and finished as the team's second leading scorer after averaging 13 points per game. Reier helped the Bucs finish in third place of the NJCAA National Championship in each of her two seasons. As a junior at Hawai'i, Reier saw action in 30 games with five starts and averaged over 13 minutes per game. As a senior, Reier played in 28 games with three starts and averaged 21.1 minutes per game. Reier finished her senior year third on the team in three-point field goal percentage at 35 percent.

Nevada has a few players who are approaching milestones, some of whom could hit those numbers over the span of the next two games.

In the 1921-22 athletic season, a local writer described the spirited play of a Nevada team as a 'pack of wolves'. The name stuck and soon almost every reference to the athletic teams was the Nevada Wolves. In 1923, the students officially designated 'Wolves' as the school's mascot.