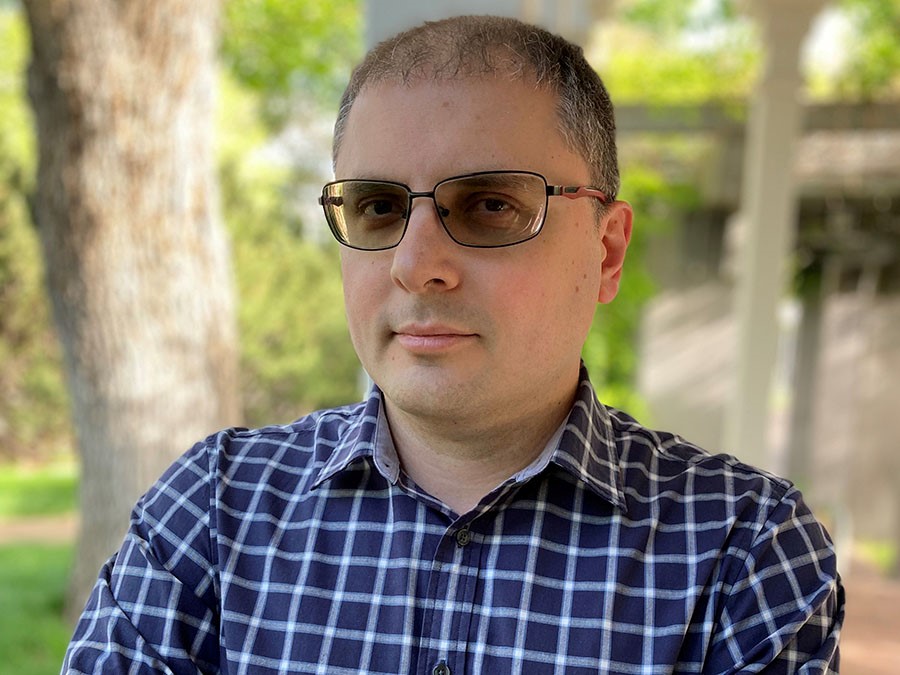 Assistant Professor Timur Tscherbul’s CAREER award for the Department of Physics, College of Science, supports research that highlights the importance of scientists’ ability to model and explain the quantum dynamics of chemical reactions. He aims to advance the development of quantum computers, which he says may enable designs of materials for energy conversion and storage.

The CAREER awards are presented through the National Science Foundation’s early career development program. Tscherbul’s CAREER proposal, supported by a $450,000 award, is inspired by the groundwork quantum reaction dynamics experiments conducted by Professor of Physics Jonathan Weinstein and his group of researchers at the University. His main goal for his students is to continue developing quantum theory courses so that quantum-based software is more accessible to non-physicists and students who have little experience with higher mathematics.

Below, Tscherbul has answered some questions about his CAREER project, his hopes for his future scientist students, and his ambitions looking forward to the next 10 years of his career.

Can you describe the research your CAREER award will support?

Chemical reactions are everywhere – from our cars’ internal combustion engines to far outskirts of the Universe. They are essential to life-sustaining processes on Earth, be it photosynthesis or metabolism in the living cells.

Despite the self-evident importance of modeling chemical reactions, our ability to do so is severely hindered by the myriad of possible ways in which molecules can move and interact. For example, large molecules such as proteins have thousands of vibrational modes, whose rigorous modeling demands exorbitant computational resources, which scale exponentially with molecular size. To make matters more complicated, no approximate techniques devised by theoretical quantum physicists over the last century (such as perturbation theory) can be applied to obtain the accurate rate constant of even the simplest chemical reaction H + H2 -> H2 + H. In this sense, chemical reactions truly are a quantum physicist’s nightmare.

My CAREER-supported research aims at developing a new class of algorithms for modeling the quantum dynamics of chemical reactions on a quantum computer. By relying on counterintuitive quantum mechanical concepts such as superposition and entanglement, quantum computers can potentially solve thorny, formerly inaccessible problems, for which no efficient classical algorithms are known. While the development of quantum computers is still in its early infancy, preliminary research has demonstrated the promise of quantum computation when applied to the electronic structure problem in molecules. My contribution would be to extend this work to describe the quantum dynamics of chemical reactions.

What are the real-world implications of this research? What do you hope to achieve?

The reliable theoretical description of chemical reactivity in complex molecular systems will have implications across a wide range of research fields by enabling the design of novel molecules and materials for catalysis, photovoltaics, and energy storage and conversion.

The ultimate goal would be to use a quantum computer to achieve a quantitatively accurate description of a complex chemical reaction beyond the reach of modern classical supercomputers (i.e. to demonstrate quantum supremacy).

What spurred this area of research for you? How has it evolved?

Since my graduate school days I have been fascinated by how chemical reactions unfold at the most fundamental, single-molecule level. This led me to study quantum reaction dynamics, a mature field that has been reinvigorated in the last decade by rapid development of experimental techniques for cooling and trapping molecules at very low temperatures. My research on ultracold collisions and chemical reactions is inspired by the pioneering experiments in this field, such as those performed in the research group of Prof. Jonathan Weinstein at UNR, investigating the quantum properties of atoms and molecules trapped inside a para-Hydrogen matrix which could be used as hardware components of next-generation quantum computers and sensors. My interactions with the foremost quantum theory and computational chemistry groups at UNR led by faculty members Andrei Derevianko and Sergey Varganov have led to numerous novel insights into the fascinating quantum world of cold atoms and molecules.

The Faculty Early Career Development (CAREER) Program offers the National Science Foundation's most prestigious awards in support of early-career faculty who have the potential to serve as academic role models in research and education. How are you planning to integrate education and outreach in your CAREER project?

My education plan involves the development of a new quantum theory course with a lower barrier for entry compared to the standard courses. Quantum physics is often portrayed as an arcane field rife with intuition-defying concepts (such as the particle matter-wave duality and entanglement), which is accessible only to those with extensive mathematical background. The rise of the quantum information industry has led to the development of easy-to-use Python-based quantum software frameworks, such as IBM’s Qiskit and Rigetti’s Pyquil, which made programming quantum processors much more accessible to non-physicists. These open-source tools can be used by students with a minimal prior exposure to linear algebra or calculus, opening up the opportunity to teach quantum physics to a much wider audience than was previously possible.

How do you hope to have an impact in your students’ lives and futures as scientists?

My message to students is that quantum physics is a fascinating and fun subject that enables us to make groundbreaking discoveries about how the world around us works.

As the government and private funding for quantum technologies continues to expand, research training in quantum physics offered by the UNR Department of Physics will give you the skills essential to your future career, no matter whether in academia or in industry. We are always looking for talented and passionate students to join our team, so if this describes you, make sure to get in touch!

What’s next for you, your research and your career?

I plan to spend the next decade developing quantum algorithms for complex problems in chemical physics and figuring out how to build quantum computers and sensors out of molecules – the fundamental building blocks of life.