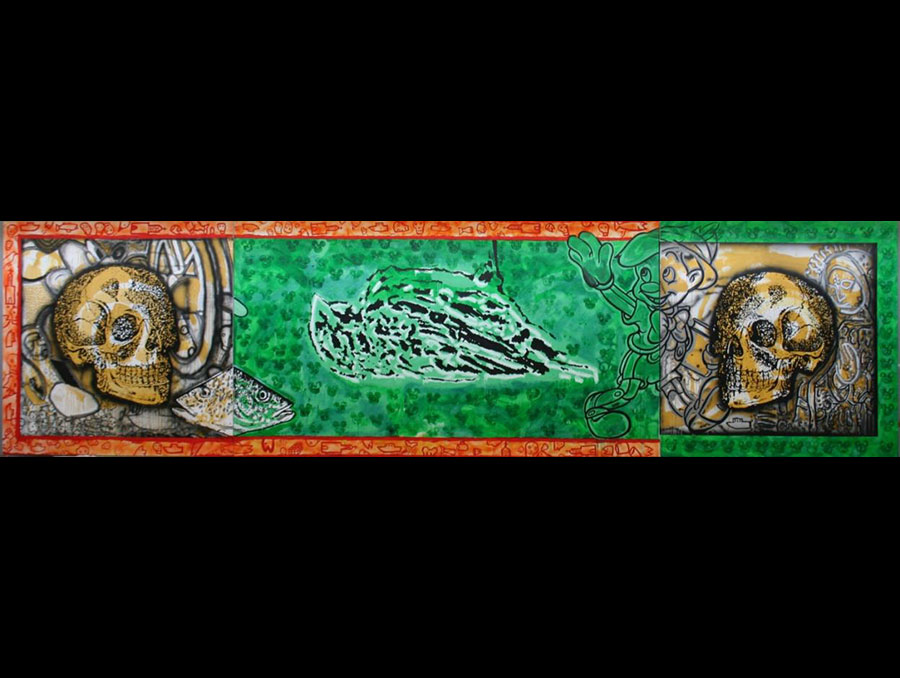 Two University of Nevada, Reno students and interns with the John and Geraldine Lilley Museum of Art recently curated an art exhibition for the City of Reno, “The Lilley in the Open,” with objects from The Lilley’s permanent collection. Due to COVID-19 restrictions, the exhibition was unable to be visited in person, but the students worked to engage with the public virtually and share the exhibit on social media. School of the Arts students Annaiz Ramirez and Kayla Johnson created a digital exhibition catalog, developed exhibition posters and interviewed one of the artists featured in the show, Michael Sarich, associate professor of art in the College of Liberal Arts. The interview with Johnson and Sarich is below.

Michael Sarich is a contemporary artist currently working in Reno, Nevada. Originally growing up in Chicago, Illinois, Sarich earned his Bachelor of Fine Arts in printmaking at Northern Illinois University and his Master of Fine Arts at the University of Oklahoma, with specializations in drawing, painting and sculpture. Duality, symbolism and commodification of cultural and personal symbols play an immense role within Sarich’s artistic practice. There is a metaphorical duality within both the materials and the iconography utilized, something that speaks to the reproductive quality of the images themselves. Pulling from personal anecdotes and experiences to commodified images such as Disney characters and skulls, the result is visually poetic compositions of layered materials and imagery that work in a similar fashion to a puzzle open to subjective interpretation. His works pose questions about the reproduction of cultural symbols, inviting viewers to question how the commodification of imagery changes our perceptions, understanding and overall meaning of an image. Sarich’s work Heart and Soul II Dice was included in the The Lilley in the Open exhibition.

When you began art making, did you start with drawing, painting, sculpture, ceramics?

It started when I was a kid. I grew up in a large family, (three brothers, three sisters) in an 800-square-foot house, and there wasn’t any room to do anything, so I just started drawing.

Is there a medium you like working with the most?

Your works have been labeled as “complex visual diaries” of your personal experiences. There’s physical and metaphorical layering of mediums and imagery, and also distortion of familiar symbols. Do automatic movements and randomness play a role in your works, or is everything kind of planned out?

There’s definitely the work and I’ll react to it spontaneously. I try not to direct the idea and just let the work take over. The work directs me and I just follow it. I try to get out of my own way. I think that’s the biggest challenge artists have is to get out of their own way and let their work do the talking. It’s all the subconscious. It can feel like you’ve been working on a piece for an hour, but it’s actually been eight hours. That’s what I try and get from my work, [allowing] my brain to take over.

So, your hand just does the work, and you don’t really think about what you’re doing? Kind of like you’re on autopilot?

Yeah, kind of. It’s subconscious, then the critique aspect comes later. When a piece gets close to being done, I like to critique it.

Do you critique it yourself or do you take it to other people?

Both. I usually do it myself with the formal aspects of the art. What’s the composition, the color, where’s your ground spaces? And I see if they’re working.

In terms of distorting familiar imagery, do you seek to incite discomfort in the viewer, or make them think critically; what do you look to incite, if anything?

I want the viewer to come up with questions.

So, your works are open to interpretation by the people who are looking at them?

Yes, absolutely. I want them to bring their own sensibilities to the piece, so they can come up with something different than I would. It’s always interesting to see somebody else talk about your work. I like to put the viewer in the driver’s seat.

The work included in “The Lilley in the Open” is your print Heart and Soul II Dice. Do you come up with the titles first before the work, or vice versa?

Both. I try to keep my titles very simple. Unless I directly include a title, I like to hint at what’s going on.

Was that work a screen print or a lithograph?

It was a woodcut. I used slats, then I built a frame to put them all in place.

So many of your works are usually on a large scale, some being as big as 5 feet by 19 feet. Do you like working on such a large scale, and how long do those projects usually take?

Well, that (BUTTING HEADS II) piece took me a month; so, they come pretty fast.

Within your creative process, do you work on one project at a time or do you do multiple at once?

Yes. I’m starting a painting there, finishing up a ceramic piece here; I work on a variety of things.

How would you define an artist?

Somebody who is conveying a message. ‘Artist’ is a broad stroke. It could be someone in music, dance, visual art. Artist can be a very broad term. It carries a lot of weight to it. I think an artist can also be an object maker. Artists try to re-inform the public and try to get people to look at things in a different way.

When you’re art making, do you think about how other people are going to judge it, or do you just do it for yourself?

No, I don’t think about that. My work’s not for everybody. I definitely have an audience which doesn’t include a lot of people. They’re going take offense to it no matter what. If I worried about what others think, it wouldn’t be my work. There’s a lot of people who try and guess at the next phase, what’s going to be popular, and they gear their work towards that, and I don’t think that’s [good] at all.

A lot of your works are labeled as mixed media, even though they’re under the umbrella term of painting. So you use a lot of acrylics, charcoal, etc.?

Yeah, I’m a really big fan of acrylics because it goes with the themes. It’s plastic paints, it's plastic imagery. And you can also dilute it.

There’s a lack of people in your works (except for some sculptures like CONSUME), so you’re not so much interested in people, but symbols. Could you speak a little bit about some recurring motifs in your work? (Disney characters, churches, Virgin of Guadalupe, fish, skulls, birds and fish).

Well, the bird is a finch, which is a bird that coal miners would use to see if the air in the tunnels they would go to was toxic. The birds would be put down there and if they died, the miners would know the air was too toxic for them to travel down there. And I’ve always thought that it was weird that we domesticated [birds]. Putting birds in cages seems like a strange thing.

The skulls started out as Day of the Dead and Tibetan Monk skulls. Then, as the years went by, I realized this was pop iconography now, because they’re everywhere. All these things are saturated in society. [The Virgin of Guadalupe] is the same – a commercialized image that’s lost a lot of its meaning. I think when something becomes a pop-culture image, it’s hard to take it seriously. You can find [these symbols] on T-shirts, bumper stickers, phones, etc.

In the early 2000s, you were diagnosed with Parkinson’s. How much, or how little, of an impact has this had on your practice, and do you feel like your work has changed since being diagnosed?

A lot of my graphic symbols I could probably get done in five to six hours. Now, my time is cut way back. I still like to get stuff done and I enjoy the process, the process of seeing where things take you.

Do you feel like you’re working on the same ideas or the same themes?

The same process, but not necessarily the same ideas. [The ideas] kind of morph into something else.