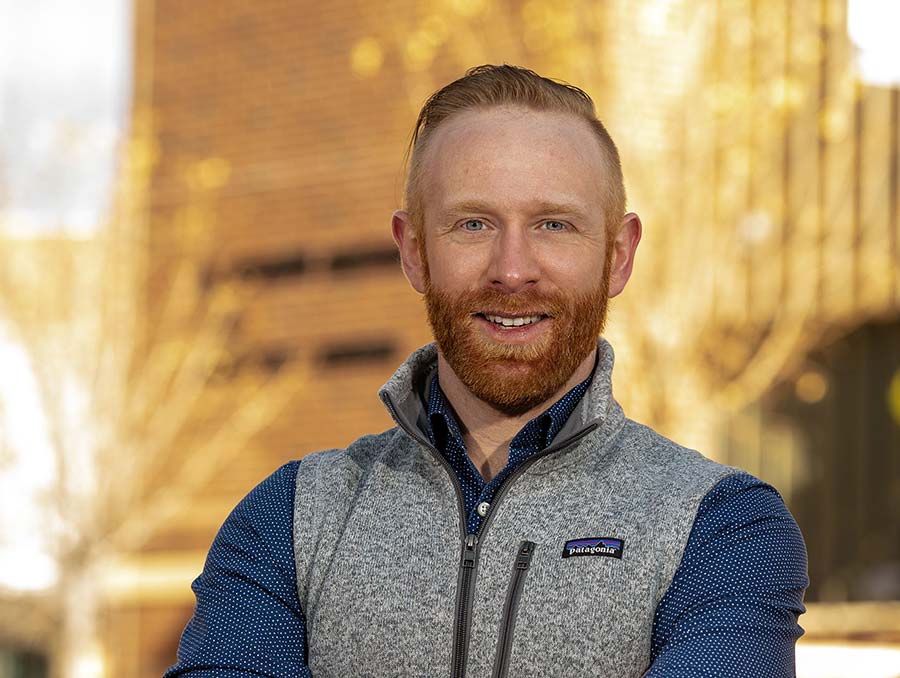 Steven Frese, a new assistant professor for the University of Nevada, Reno, is researching how the relationship between humans and the microbes in their gut can give insight into digestion, health, infections and nutrition.

Frese is studying how diet affects the interactions between humans and bacteria, specifically in the gut microbiome, which is the bacteria, viruses, protozoa and fungi, as well as their collective genetic material, present in the gastrointestinal tract. As part of the Department of Nutrition in the College of Agriculture, Biotechnology & Natural Resources, Frese’s goal is to develop technology and therapies that can improve health and nutrition, and bring these discoveries and innovations to practice in the health care and food industry.

“Dr. Frese is a wonderful addition to the Department of Nutrition,” Jamie Benedict, chair of the Nutrition Department, said. “His research on the gut microbiome is cutting edge. That, combined with his knowledge of nutrition and food science, make him uniquely suited to develop solutions to very important challenges that confront nutrition and medical professionals.”

Prior to joining the University, Frese investigated how breastfeeding influences interactions between an infant’s immune system and certain bacteria in the infant’s gut microbiome. These interactions with an important bacterium, called Bifidobacterium, influence the infant’s risk of developing allergies, asthma and autoimmune disorders later in life. The results of the study, published in January, showed that breastfeeding promotes the abundance of Bifidobacterium in the infant gut microbiome thanks to complex sugars in human milk, and that Bifidobacterium populations in the gut are necessary to shape the development of the immune system in early life and reduce inflammation during an important developmental window for the immune system.

Frese and his team also established a baseline for how many infants in the United States had Bifidobacterium, regardless of location or if they were breastfed or formula fed. Using a tool called metagenomic sequencing, which looks at genetic material recovered from fecal samples, Frese and the team were able to characterize both the bacteria present and the functions they performed in the gut. He found that Bifidobacterium was less abundant in infants in the United States than what was commonly expected. He and his team also found that infants with higher levels of Bifidobacterium had lower levels of antibiotic resistance genes in their microbiome. In contrast, infants with higher levels of antibiotic resistance genes are more likely to develop infections by bacteria that are resistant to antibiotic therapy.

Frese also recently published research on probiotics sold to hospitals for premature infants, or infants born before the 37th week of pregnancy. His goal was to investigate what happened to infants’ gut microbiome when they were fed the probiotic B. infantis EVC001. The results showed that preterm infants who received the probiotic had reduced risk for morbidity, or the condition of having a disease, and reduced inflammation in the gut.

More specifically, Frese and his team researched what a single strain of a single organism of the probiotic would be able to do when it was in the right environment. After feeding the probiotic to preterm infants, they found that the babies’ gut microbiomes developed into what microbiomes should look like in healthy full-term infants. Even more significantly, the infants were substantially better off than they would have been without the probiotic. Many of the conditions afflicting preterm infants can be related to inflammation, and Frese found that this probiotic could diminish the amount of inflammation the infants experienced after feeding them just one probiotic organism.

“There’s been a lot of work in the field showing that different kinds of probiotics can be good for infants and that some don’t have any effect at all,” Frese said. “As a microbial ecologist, I know that you can’t just tell patients that all probiotics are the same, because the bacteria in them are all so different from each other, but usually that is the kind of physician guidance patients get.”

Frese previously worked as the director of microbiology and bioinformatics at Evolve Biosystems, Inc., a startup company spun out of research at the University of California, Davis, where he built research teams, led scientific research, and communicated the findings to audiences that included clinicians and parents of newborns. He is excited to bring that experience to his research at the University and plans to apply what he’s learned to help populations not yet being served by the field.

“When I see how microbial communities interact with someone’s diet, it gives me clues on how to change a diet to improve overall health,” Frese said. “We can use these lessons from the gut microbiome to actively change and improve the food we consume.”

While Frese just started at the University, he is hoping to work with his new colleagues to build a research program that uses the lessons he’s learned in microbial ecology and nutrition science to identify underserved populations that can benefit from recent discoveries of the role of the gut microbiome.

Experienced physician, researcher, mentor and educator to lead the obstetrics and gynecology department at the University of Nevada Reno School of Medicine (UNR Med) and Renown Health.