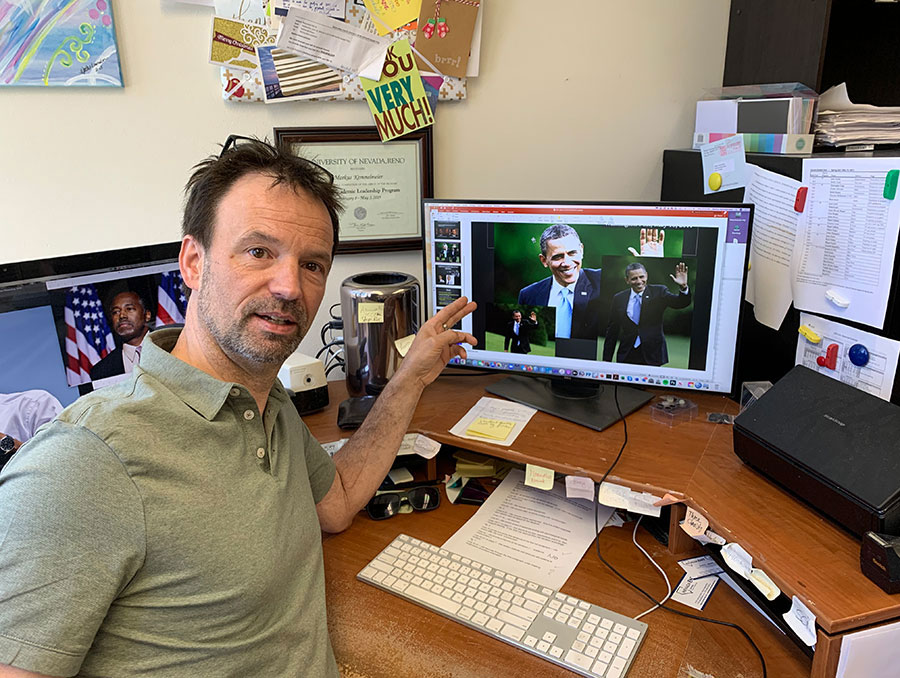 Skin tone is one way people portray value and is often associated with one’s social status. The portrayal of skin tone in photographs during an election campaign, based on research, is cause for concern. One researcher on the University of Nevada, Reno campus said it has provided society an opportunity to engage in this subtle bias.

The first study looked at former President Obama’s first term in office during 2009-2011. Using over 4,000 photographs from 35 American newspapers that endorsed a democratic or republican presidential candidate, the study concluded skin tone portrayal did result in a bias.

“We found in earlier studies that the democratic supporters of Obama perceived his skin tone to be lighter than republican opponents of Mr. Obama,” Kemmelmeier said. “Therefore, it seemed that newspapers continued this bias trend by selecting photographs that followed these same perceptions.”

The second study looked at former presidential candidate Dr. Carson during the 2015-2016 run in the primary election. This study collected over 1,000 photographs from 53 American newspapers. This study also concluded that conservative-leaning newspapers are more likely to portray a Black man as darker.

“This finding is consistent with a racial bias, meaning conservative-leaning newspapers, in contrast to their liberal-leaning counterparts, portrayed a Black politician as darker,” Kemmelmeier said. “This occurred regardless of whether the Black politician was a democrat or a republican himself.”

Kemmelmeier said that past research has often shown that political bias is symmetrical, that democrats show a bias against republicans, and republicans against democrats. Even though the present study could have easily shown the same pattern. Conservative-leaning newspapers portrayed a Black politician as more dark-skinned, even when he was a republican.

“This study is not 100 percent certain in its conclusion because the effects we observed were weak,” Kemmelmeier said. “However, based on the majority of evidence we observed, we conclude that skin tone was portrayed differently in newspaper photographs.”

Research used in the studies showed that portraying a candidate as darker-skinned shows a less favorable view of him and associates him with a lower social status compared to when is he portrayed as lighter-skinned. This evidence led the researchers to conclude that this dimension of bias was a party-based skin tone bias.

Kemmelmeier also pointed out that the data collected from the available photographs were a product of the specific conditions in which the photographs were taken such as lighting, composition, environment, etc. Another thing to note is that some photographs were edited prior to publication. In the process, they made the person in the picture appear lighter or darker.

“There likely isn’t a purposeful attempt to devalue someone,” Kemmelmeier said. “The editors look at what image is most compelling in their own judgement and that judgement whether acknowledged or not, includes an evaluation about skin tone.”

“In regards to the current situation, it pervades society,” he said. “It shows up in lots of different crevices.”

Although the most recent candidate for Vice President was a person of color, Kemmelmeier said they didn’t purse research on Vice President Kamala Harris at this time because there’s reason to believe skin tone bias plays out differently based on gender. He said he has future plans to study a potential bias with Vice President Harris and they hope to identify a republican female person of color to compare the research against.

This research was published in Analyses of Social Issues and Public Policy, an online journal of the Society for the Psychological Study of Social Issues. Kemmelmeier said it’s important to acknowledge these biases exist and the fact that skin tone is portrayed differently in published photographs at all. He said his hope is that newspapers pay attention to the choices they make in selecting a photograph for publication.

“If someone is motivated to dislike a particular candidate of color, they won’t need an altered profile; they’re already seeing the person with a darker profile.”