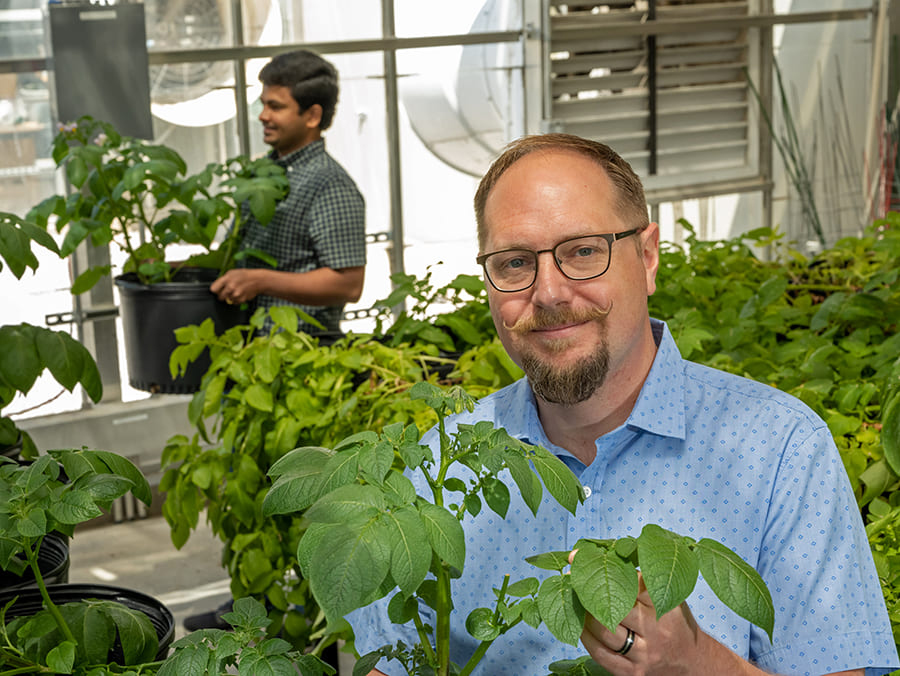 Massive losses in the United States' number one vegetable crop, potatoes, aren't only due to pests or drought, they’re due to damage in the handling and storage of potatoes over the nine months of storage they generally undergo on their way to the supermarket as fresh potatoes or as potato chips or fries.

A biochemistry approach that seeks to identify genetic characteristics of the wound healing process in potatoes has had success in a project led by Dylan Kosma, a biochemist in the College of Agriculture, Biotechnology & Natural Resources at the University of Nevada, Reno.

In his work, completed as part of the College’s Experiment Station research, Kosma has identified the first transcription factors known to regulate deposition of components that make up the skin that forms during the wound healing process in potatoes.

One important component of potato tuber wound healing is the deposition of a corky material that makes up a large proportion of “skin” that covers wound sites, suberin. Suberin is a lipid polymer that is produced by all plants and is a major component of wound healing tissues in potatoes. While this wound-healing tissue can be found in nearly every plant, there is still relatively little known about its makeup and function. Even less is known about the genetic controls of wound suberin formation.

"We're using the potato model to understand the biosynthesis and regulation of suberin," he said. "We will use genetic studies to help the potato breeders find the right combination of genes for breeding potatoes with better wound healing capacity and improved storage life to help reduce post-harvest losses."

The work won't just be in the lab under a microscope. Kosma is growing a greenhouse full of potatoes in the College's climate-controlled greenhouses.

Using the greenhouse crops, the team has used CRISPR-based editing, a genetic engineering technique, identify the genes in potato to better understand the function of these master switches that activate wound suberin deposition.

"The overarching goal is to determine the function of these novel transcription factors in regulating the wound healing process and determine their role in the different rates of tuber wound-healing in commercial chipping cultivars," he said. "If they can heal better and faster, we can reduce losses in storage. Like the proverbial bad apple, one bad spud spoils the bunch."

Physical damage to potatoes in the form of wounding and skinning during harvest and transport to storage facilities is inevitable. Poor wound healing and subsequent pathogen infection is one of the major culprits for the post-harvest storage losses.

Some commercial cultivars – plants produced by selective breeding – such as the Atlantic variety, have desirable characteristics for potato chips but poor wound healing capacity and as a result, greater losses during storage.

Kosma began this research four years ago with a grant from the National Science Foundation. He continues to track down the master switches to make tasty, durable potatoes with continuing funding from a leading potato chip producer, which seeks to reduce storage losses by selectively breeding out those poor wound healing characteristics.

"Some varieties have excellent taste for chips or French fries but are lousy in storage," Kosma said. "Others are great in storage but don’t have the greatest taste. My group is working with industry and potato breeders to improve the storability of these high-quality cultivars. Long-term storage of potatoes is required for chip production to continue year-round."

Potato, a food staple around the world, is one of the top five crops in Nevada and is the number one vegetable crop, with a more than $4 billion industry, in the United States. As much as 33% of the U.S. potato yield is lost due to post-harvest issues each year; this equates to about $1.2 billion in lost potential revenue – just at the level of the farmer.

In addition to stemming the tide of losses with potatoes, Kosma hopes what they learn in this process will also be applicable to other food crops