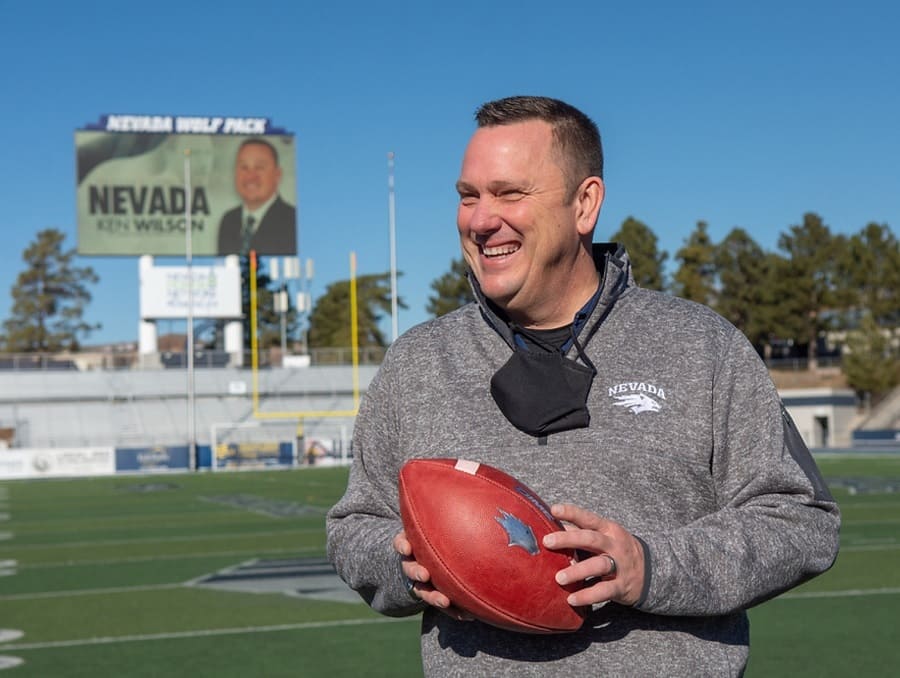 Nevada Athletics will hold a press conference for members of the media and invited guests introducing Wilson Friday at 3 p.m. at Basin Street Club in Mackay Stadium. Support your Wolf Pack and place a deposit for new 2022 season tickets here. Season ticket renewal information for existing season ticket holders will be available next week. To make a gift to support Nevada football click here.

"I couldn't be happier about becoming the 27th head coach in Nevada football history," Wilson said. "It's a dream come true and a job that I have always hoped and worked toward becoming a reality like this is fantastic."

"Thank you to President Sandoval and Athletics Director Doug Knuth for believing in me and giving me this opportunity. Also, thank you to Chris Ault for giving me my start here and being a great leader and mentor to me."

"My family and I couldn't be more excited about the future of Wolf Pack football."

"We are thrilled to welcome Ken and his family back to Nevada," said Nevada Director of Athletics Doug Knuth. "The Wilsons have very deep ties to this University, Wolf Pack Athletics, and to the Reno community, and have been part of some of the most successful teams in program history. We look forward to this new era of Wolf Pack Football under Ken's proven leadership."

Wilson also coached the defensive line, linebackers, and safeties, during his time at Nevada. During his coaching tenures, the Wolf Pack reached a bowl game 11 times, including each of his last eight seasons, and captured two Western Athletic Conference titles (2005, 2010), five Big West Conference championships (1992, 1994-97), and two Big Sky Conference titles (1990-91) with Wilson on staff.

"Ken Wilson, and the Wilson family, have a deep connection to our University, and we proudly welcome them back to the Wolf Pack Family," said University President Brian Sandoval. "He embodies The Wolf Pack Way, and will continue to lead and mentor our student-athletes to success on the field of competition and in the classroom, as well as representing our University and our community to the highest standards."

Wilson spent six seasons working with Ault from 1989-92 and 1994-95. He was also an assistant coach for Jeff Horton in 1993 and Jeff Tisdel from 1996-98, spending those final three seasons as defensive coordinator. As the nation's youngest Division I (now FBS) defensive coordinator, he directed Nevada's 1996 defense to the top of the conference in every defensive category and was part of the Las Vegas Bowl victory over Ball State.

In 2009, Wilson coached the Wolf Pack linebackers and oversaw the development of a youthful group that included second-team All-WAC selection James-Michael Johnson, who went on to be taken by the Cleveland Browns in the fourth round of the 2012 NFL Draft. In 2008, he coached a pair of future NFL linebackers in Jushua Mauga (New York Jets & Kansas City Chiefs) and Jerome Johnson (St. Louis Rams).

In his final season at Nevada in 2012, Wilson helped senior Albert Rosette successfully move back to middle linebacker after playing defensive end the year prior. Rosette went on to lead the Mountain West Conference – Nevada's first year in the league – with 135 tackles, good for the third-most in program single-season history and earned first-team All-Mountain West Conference recognition.

The Wilson family's ties to Nevada run deep. Wilson and his wife, Heather, have a son, Tyler, who was a long snapper for the Wolf Pack from 2012-14, a daughter-in-law, Makenzie, and a daughter, Baylie.

Most recently, Wilson served as co-defensive coordinator and inside linebackers coach from 2019-21 at Oregon. Over his coaching career, Wilson has been a part of 18 teams that have advanced to a bowl game, including 15 of the last 16 years.

Oregon's Pac-12 championship in 2020, its second in a row, was the 11th conference title Wilson has been a part of during his coaching career.

Wilson added co-defensive coordinator to his duties after helping Oregon to back-to-back Pac-12 Conference titles in his first two years on staff.

In 2020, Wilson helped the Ducks to a conference title with the defensive putting together a dominant performance in the Pac-12 Championship game, holding No. 13 USC to just 38 rushing yards on 28 carries (1.4 yards per carry) in a 31-24 win. Wilson's linebackers – Mase Funa, Noah Sewell, and Isaac Slade-Matautia – played a huge part in the win combining 17 tackles and a tackle for loss.

Sewell's performance in the Pac-12 Championship game capped a season that included a number of honors. The Ducks' inside linebacker lived up to the hype of a consensus five-star recruit, earning freshman All-America honors from 247Sports, ESPN, the FWAA, Rivals, and The Athletic.

In Wilson's first season at Oregon, the Ducks' defense led Oregon to a Pac-12 Conference title, a win in the Rose Bowl, and a 12-2 overall record while ranking among the nation's elite units.

Oregon finished ninth in the country in scoring defense (16.5 PPG), 13th in rushing defense (108.93 YPG) and 22nd in total defense (329.1 YPG). The Ducks also ranked second in interceptions and 13th in sacks. In the Pac-12, Oregon ranked either first or second in every major defensive statistical category.

Two of Wilson's linebackers finished the 2019 season in the top five on the team in tackles, with senior Troy Dye posting a team-high 84 tackles including 9.5 tackles for loss and 2.5 sacks. The Ducks' four-year starter, who earned Associated Press first-team All-Pac-12 Conference honors, was picked in the fourth round of the 2020 NFL Draft by the Minnesota Vikings. Sophomore Isaac Slade-Matautia led the Ducks in pass breakups with 11 while finishing fifth on the team in tackles.

Wilson made a major impact on the recruiting trail in his first two seasons in Eugene. In the 247Sports recruiter rankings, Wilson ranked third in the Pac-12 Conference as well as 29th in the nation in the 2020 cycle. He helped Oregon finish with the nation's No. 12 class that included a pair of linebackers who ranked among the nation's top 13 players overall.

In the 2021 cycle, Wilson continued to help Oregon accrue talent ranking in the top 10 (No. 8) among Pac-12 coaches for the second straight season. The Ducks finished with the sixth-ranked class in the country while finishing with the Pac-12 Conference's top class for the second consecutive year with Wilson on staff.

In 2018, Wilson's work with the linebackers helped Washington State finish with a program-record 11 wins, including a victory in the Alamo Bowl and a No. 10 ranking in both the Associated Press top 25 poll and the USA Today Coaches poll. The Cougars led the Pac-12 and ranked tied for 16th nationally in sacks (38) while ranking in the top three in the conference in takeaways (2nd), rushing defense (3rd), and third-down defense (3rd).

Washington State's linebacker corps supplied its top two tacklers in 2018 to go along with its top two leaders in sacks and leader in tackles for loss. Senior Peyton Pelluer and sophomore Jahad Woods both earned Pac-12 all-conference honors, while the position group totaled 37.5 tackles for loss and 17.5 sacks.

Under Wilson's guidance, Washington State's linebackers produced a pair of players that finished in the top five in the Pac-12 in tackles in Pelluer (2015, 2016) and Justin Sagote (2013). A three-time Pac-12 all-conference choice, Pelluer played in the NFLPA Collegiate Bowl after finishing his career fifth all-time in tackles (352) at WSU. In 2015, Pelluer combined with Jeremiah Allison to give the Cougars two of the top seven leading tacklers in the Pac-12.

Wilson has seen over 20 of his former players sign professional contracts, including six linebackers who were all in the NFL at once in 2012 and 2013. Including Dye, he currently has four former players in the NFL: Deone Buchanan (LB – Atlanta Falcons), Shalom Luani (SS – Houston Texans) and Frankie Luvu (LB – New York Jets).