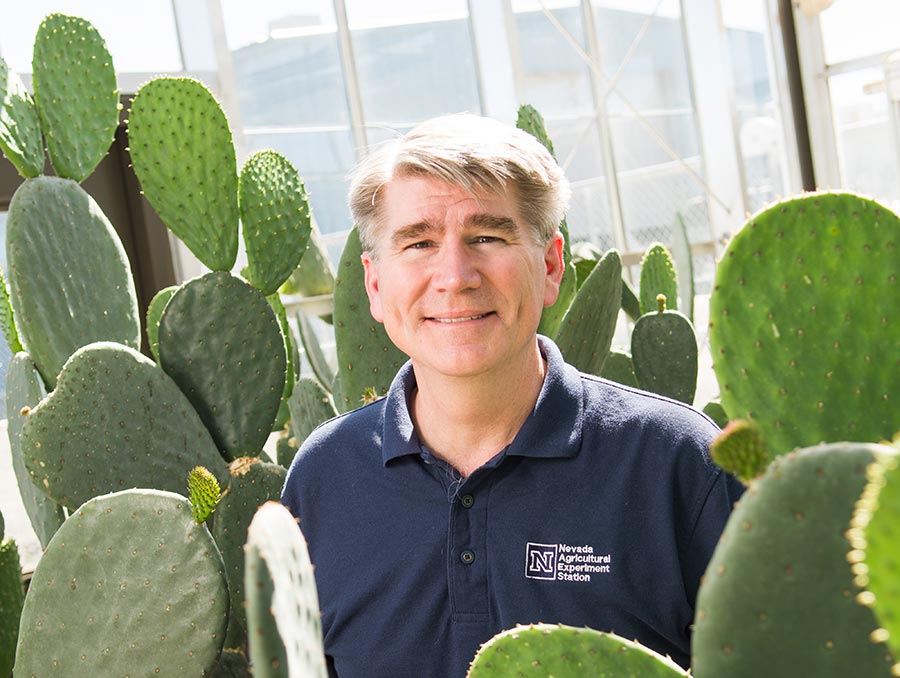 John Cushman, foundation professor with the University of Nevada, Reno, has been awarded a $1.55 million grant from the National Science Foundation to conduct research on improving drought tolerance and water-use efficiency of plants to help preserve agricultural productivity in the face of rising temperatures and prolonged droughts.

As droughts are becoming more frequent and severe and crop productivity is declining at an accelerated rate, Cushman, with the University’s College of Agriculture, Biotechnology & Natural Resources, is conducting work on a synthetic biology approach to allow the transfer of drought-tolerant traits from certain plants to major crops. The goal of his research team in the Department of Biochemistry & Molecular Biology is to create drought-tolerant crops to aid global food production during periods of intense drought.

Specifically, Cushman and his departmental colleague Assistant Professor Won Yim, and international collaborator Assistant Professor Sung Lim at Sangji University, South Korea, are aiming to use an alternative form of photosynthesis known as crassulacean acid metabolism (CAM). Plants with CAM and associated traits, such as agave and cactus, avoid water loss by absorbing carbon dioxide through open pores, or stomata, in their leaves and storing it as malic acid at night, since water vapor is less likely to escape the leaves in the cooler, more humid night conditions. During the day, the stomata stay closed while the plant uses the stored malic acid and sunlight to convert carbon dioxide into sugars and starch.

Cushman is combining this process with work on increasing tissue succulence in plants. Improving on his team’s past work using Arabidopsis, or mouse-eared cress, he is using biotechnology to increase the tissue succulence of the plant by making the leaves about 40% thicker, allowing them to store more water. Plants with high tissue succulence, such as the saguaro cactus, are more adapted to surviving in arid climates.

Using both traits, Cushman and his team, as part of the University of Nevada, Reno Experiment Station, are looking to test optimized, synthetic versions of CAM, both alone and in combination with engineered tissue succulence, in soybean, one of the leading crops in the United States. The combination of CAM and succulence, when applied to soybean, should improve productivity, water-use efficiency and drought- and salinity-tolerance under hotter and drier environments.

“We need to do something about drought stress and production loss,” Cushman said. “We’re going to be seeing a lot more drought and increased heat due to climate change, but we can address these production barriers through basic biotechnology innovation. This project is a great example of what synthetic biology can offer.”

The three-year project began this spring, with work on Arabidopsis plants, testing CAM traits in combination with increased tissue succulence. After collecting these results, the team will then move on to testing the synthetic gene circuits in soybean plants. If soybean testing is a success, this engineering could potentially be used to target other vital crops, such as corn.

Another goal of this work is to train graduate students and postdoctoral scholars to conduct CAM and tissue succulence engineering in University labs. As part of this project, Cushman’s lab is going to put a special emphasis on recruiting and training historically underrepresented groups. By creating opportunities for students with a variety of backgrounds, the team is hoping to diversify the future scientific workforce.

Cushman is also collaborating with the University’s Reynold’s School of Journalism. Working with Associate Professor Kathleen Masterson and Teaching Assistant Professor Amber Walsh, he and his team are developing a new class on scientific communication. This class will focus on training students using infographics, interactive visualizations and social media. The intention is to teach the next generation of scientists how to more effectively communicate complex scientific discoveries and biotechnology solutions to climate change to the general public.

A third component of this training goal is outreach, which will include a series of videos that will discuss the importance of creating more climate-resilient crops to help showcase the societal benefit of this work.

The gifts will facilitate the development of a minor in sustainability.

Electrical and Biomedical Engineering Professor Bahram Parvin and his lab have developed a novel method for treating breast cancer that promises to be more effective and less toxic than traditional treatments.