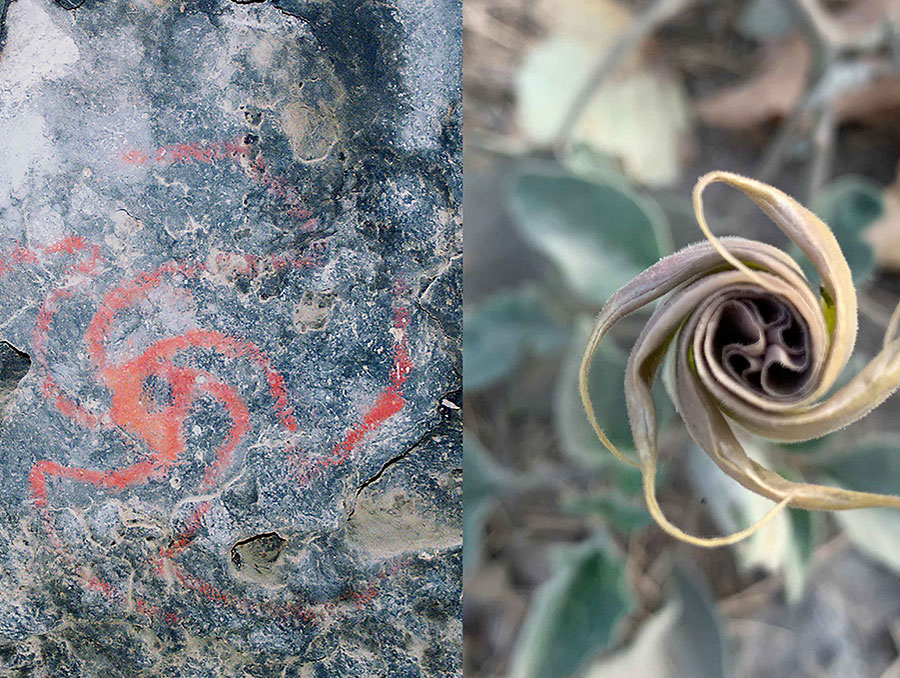 The Human Paleoecology and Archaeometry Laboratory at the University of Nevada, Reno recently conducted radiocarbon analysis of Datura wrightii quids (chewed up materials) to determine the chronology of the quids and when the Pinwheel Cave in southern California where the quids were found, was last visited. The lab, led by Assistant Professor of Anthropology in the College of Liberal Arts Christopher Jazwa, performed specialized analysis on quids from the Datura wrightii flower, which is historically known as a poisonous and hallucinogenic plant. A team of archaeologists began site excavation at Pinwheel Cave when it was noted that the rock art appeared to represent the Datura flower.

Pinwheel Cave was first noted in the late 1990s by staff of the Wind Wolves Preserve (the owner of the land) and was officially recorded in the early 2000s. Rock art and quids in the crevices of the cave ceiling were observed at that time. Researchers noted that the rock art painting looked “suspiciously like Datura,” a pinwheel-shaped sacred flower.

Alongside the painting, researchers also discovered a number of chewed materials, which were almost all found to be a made from Datura. Jazwa was given some of these chewed materials (quids) for analysis at his lab.

“Radiocarbon analysis requires multiple steps of cleaning samples prior to measurement to minimize the opportunity for contamination,” Jazwa said.

Jazwa carefully scraped away dirt and used chemical solutions to clean the samples. Then the quids were packed into thin quartz tubes, which were vacuum-sealed and combusted to release carbon dioxide. The sealed tubes were then shipped off to the Penn State Accelerator Mass Spectrometry (AMS) laboratory, to take final measurements using specialized equipment.

Jazwa also studied the analysis collected through this process along with other radiocarbon data obtained from earlier analyses. Through statistical software, the lab noted that the earliest-dated quids (Quid H) were dated from between AD 1530-1655.

“So, we can say with certainty that these quids were from within the last 500 years,” Jazwa said.

“This means that the quids were not all placed in the crevices in the ceiling at the same time, and people took the hallucinogens in the cave over at least several generations and possibly more,” Jazwa said.

It’s difficult to interpret rock art because the images are usually abstract. Jazwa said it’s hard to note the purpose for the imagery in many cases. The data analysis his lab performed on the Datura quids and the linkage of the samples discovered in the cave with the rock art signify that hallucinogens were taken while creating the rock art and the paintings represent the plant itself.

Datura flowers found in Native California were historically known to be a part of adolescent initiations, where young people would drink the processed root of the plant.

Research findings from the site excavation also suggest that Pinwheel Cave was likely a communal space in which people would gather for hunting and gathering. The rock art and Datura quid findings show that art played a prominent role in the daily lives of the local community.

Pinwheel Cave will continue to be excavated to analyze a number of different artifacts in consultation with members of the Tejon Tribe. Jazwa plans to continue his work of conducting radiocarbon analysis on archaeological artifacts from a variety of sites around southern California. This includes “cache” sites that contain large numbers of baskets and other organic items. He also plans to work with colleagues to develop chronological models for human occupation of a variety of sites in the Wind Wolves Preserve.