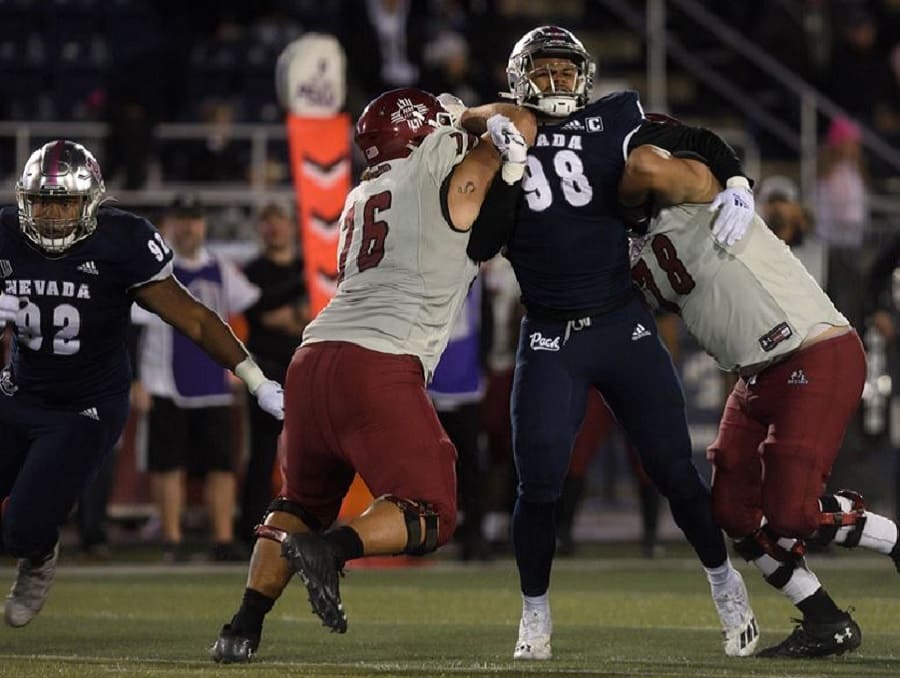 Nevada defensive lineman Sam Hammond has been named a nominee for the 2021 Burlsworth Trophy, which is presented annually to the most outstanding football player in America who began his career as a walk-on and has shown outstanding performance on the field.

Hammond is one of 88 student-athletes nominated from Division I FBS schools from across the country and is one of seven from the Mountain West. In the award's 12th year, the trophy is named in honor of Brandon Burlsworth, former University of Arkansas walk-on and All-American offensive lineman. Each nominee must have begun his first season of participation with an FBS football program without financial aid of any kind from his university's athletic department.

Before joining the Wolf Pack, Hammond worked at a ready-mix concrete plant prior to attending college. It was long hours of grueling work that built him into the tough player he is today. About one week into fall camp, Hammond initially was handed a #30 jersey to play tight end but it was swapped out for #69 and he started his career as a defensive lineman instead.

Hammond has 101-career tackles (54 solo, 47 assist) with 11.5 sacks over 55-career games including all eight this season, as a mainstay on the defensive line. He has made 16 total tackles including 5.5 tackles for loss and 5.0 sacks this season.

Hammond was named one of four captains on the 2021 Nevada football team. He is a graduate student who earned his Bachelor's in Finance and was named All-Mountain West Second Team in 2020 after recording 32 tackles and 4.0 sacks. The Yerington, Nev. native began his career as a walk-on before earning a scholarship following spring practices in May of 2018.

The Burlsworth Trophy award ceremony to honor the three finalists and to announce the 2021 winner will on December 6th at 7:00pm CST at Crystal Bridges Museum in Bentonville, Arkansas.