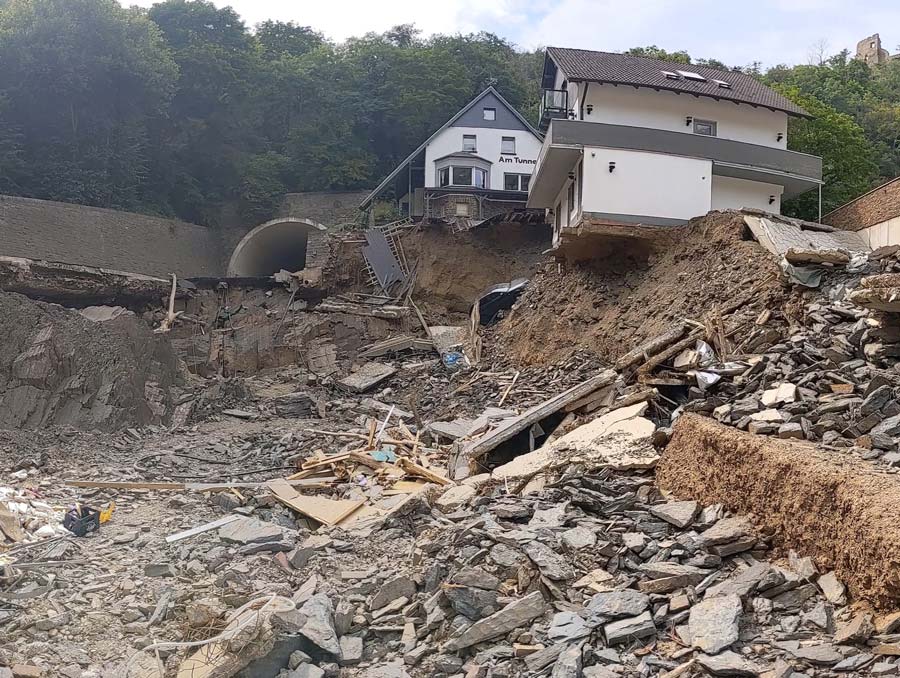 Visiting the site of a natural disaster can be overwhelming, but it can also provide some important information about how to prevent so much damage when the next severe weather event inevitably rolls around. Michael Gardner, assistant professor in the Department of Geological Sciences and Engineering, recently travelled to Europe to understand how severe flooding this summer impacted geo-structures like dams, dykes and bridges, and how they can be built safer to prevent disaster again.

Gardner travelled to Europe as part of a Geotechnical Extreme Events Reconnaissance (GEER) Association team. GEER members mobilized to respond to heavy flooding events in Germany, the Netherlands and Belgium and visited the sites in August.

“The magnitude of the flooding was astounding – the high-water mark in some places was over six meters (about 20 feet). Houses were swept away and carried downstream, only leaving their foundations behind. Many bridges were either heavily damaged or completely destroyed,” Gardner said. “The rainfall during this single event was on the order of what might be typical for the entire year in some of the flooded areas and was orders of magnitude greater than what was predicted,” he added.

Gardner was an academic member of the US-based team, which was led by Anne Lemnitzer of the University of California, Irvine and Nina Stark of Virginia Tech. This team collaborated with local engineers and scientists from the study areas. Gardner’s efforts involved data collection via drone imagery, LiDAR scans and multispectral imaging.

In the face of more frequent and intense natural disasters due to climate change, Gardner said it was important to consider how infrastructure will perform with more extreme loading.

“The data gathered during this reconnaissance and what we learn from it ultimately will help us design and upgrade infrastructure to better meet the demands imposed by extreme and changing weather events,” Gardner said.

The most challenging part of this project, Gardner said, was seeing the aftermath of the disaster and the destruction of peoples’ lives. “While it is a great opportunity to gather important perishable data and fascinating to see different aspects of how infrastructure performed, it is difficult to see peoples’ livelihoods ruined and their grief for lost loved ones.”

Another consideration of this research is how the places hit by the flooding will rebuild. “Beyond the highly visible destruction, most of the towns hit by these floods will essentially have to be rebuilt due to extensive water damage. Many of them have been around since 1400 or before, so rebuilding them to the same character will be difficult and expensive,” Gardner said.

Speaking to the importance of pooling resources with local and international researchers, Gardner said, “This joint effort results in a higher quality report and more data being collected in a deliberate fashion. Ultimately, all the data is made available online so that anyone can access it, which might not have been the case if GEER was not involved in the effort.” He added that working with local engineers and scientists allows the team to utilize their vast local knowledge which is, “essential to the success of the response.” The reconnaissance report will likely be published late this year and can be accessed at GEER’s website. This is the second reconnaissance team Gardner has been a part of. He was on a team as a graduate student responding to the 2014 South Napa Earthquake.