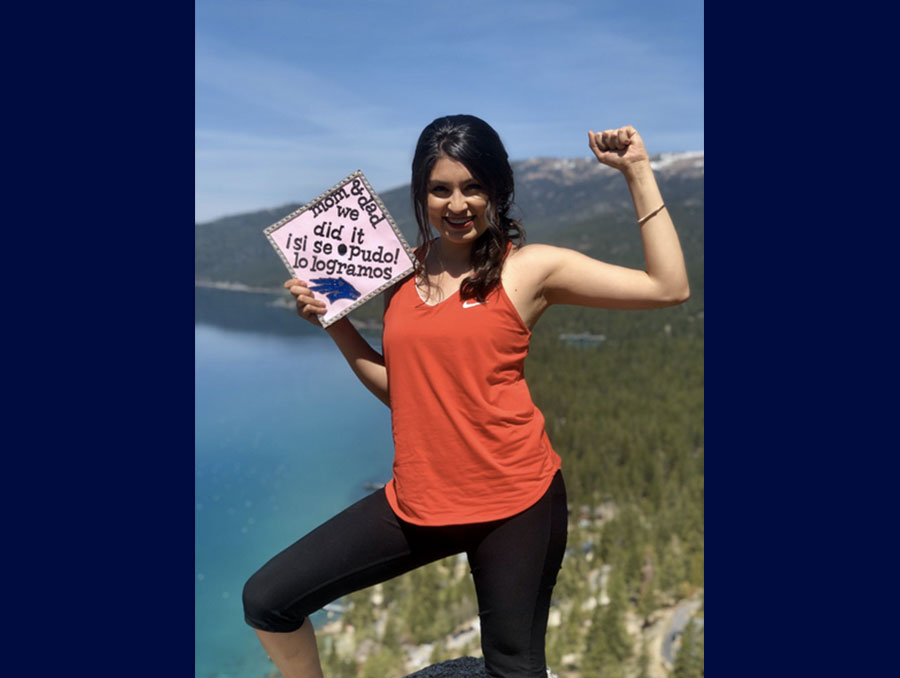 “I am a first-generation student, American and woman.” This is how University of Nevada, Reno alumna Noemí Gómez Martínez describes herself. Martínez graduated in 2016 with degrees from the College of Business and the College of Liberal Arts. She is now the current Assistant Project Coordinator for the Community of Bilingual English-Spanish Speakers (CBESS) on campus. She has nothing but appreciation for the mentors who helped her navigate college, but it’s her Latina heritage which greatly attributed to her achievements and success.

“Latinas are ‘luchadoras’ and are very strong powerful women,” Martínez said. “I believe that throughout the years, we have learned to empower one another to become a better version of ourselves.”

And Martínez certainly did just that by majoring in Spanish and business in her undergraduate education. She thought the two fields complemented each other well and she was fascinated to learn more about her native language.

Growing up as the oldest of three children, Martínez said she was raised with Mexican traditions and Spanish as her first language. Her parents were supportive of higher education and her mother kept her apprised of when to attend workshops about applying for college and financial aid. In the community, Martínez said she had to adapt to the dominant English society and at times it was difficult navigating two cultures simultaneously.

“I learned very fast that I had to work extra hard to be able to overcome any barrier that came my way,” Martínez said.

In college, Martínez had the opportunity to participate in the Global Business Program in New York. She said this was the first time she had ever been on a plane, but the experience was life changing. She said it gave her a completely new perspective on educational and career opportunities.

“Although there were times when I sat in the classroom and I was the only woman of color, I reminded myself to not be intimidated, but rather represent all the other women that were not in the same room,” Martínez said.

Humble about her upbringing and grateful for all the support, Martínez is proud of herself for how far she has come. Now, with a master’s degree in social work under her belt and her rewarding job, she hopes to inspire the next first-generation, female student just like her. She said at times it can feel uncomfortable and unwelcome to step into those spaces, but girls should always feel like they belong.

“I see far beyond a bright future for Latinas; we will empower and create positive and long-lasting change,” Martínez said. “We will be in those spaces where no one thought we would be. I see strong leaders that will impact the world and our community.”

College of Engineering and its programs make 2021 U.S. News and World Report rankings

For the second year in a row, the College of Engineering and all of the ranking-eligible graduate engineering programs housed within it received rankings.