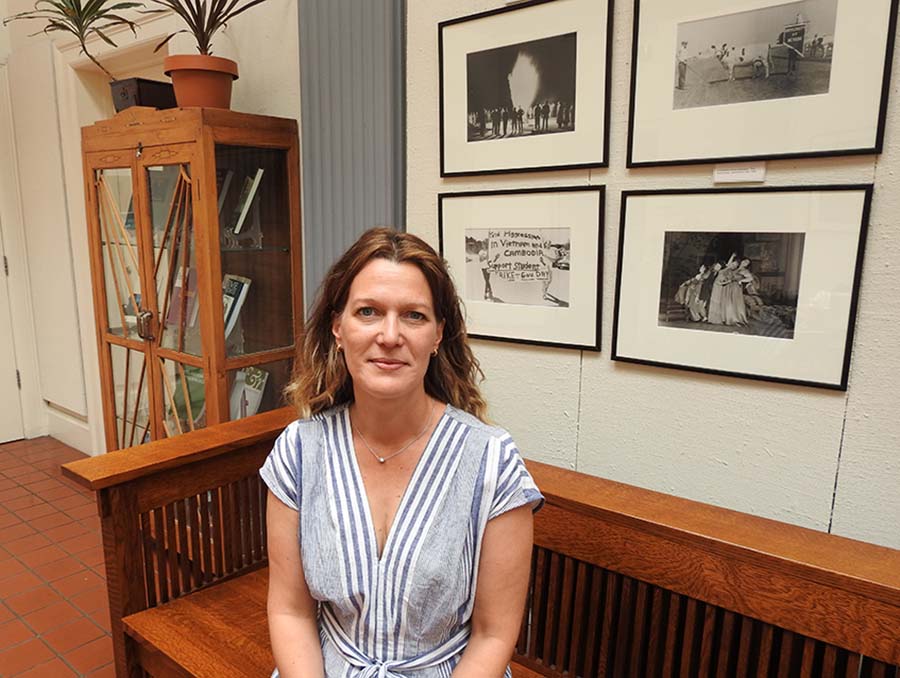 Cara Nine is the newest addition to the University of Nevada, Reno’s Department of Philosophy. Nine joined the University’s philosophy department in the College of Liberal Arts, in early July as an associate professor and chair. She brings more than 20 years of experience in the philosophy field, with research focused on border and territorial rights. Originally from Twin Falls, Idaho, she relocated to Salt Lake City, Utah, when she was a sophomore in high school. Nine then moved again to receive her bachelor's of art undergraduate degree in philosophy from Carleton College in 1997, a Liberal Arts college in Northfield, Minn. She then went on to get her Ph.D. in philosophy from the University of Arizona in 2005.

After Nine completed her undergraduate degree in philosophy, she wasn’t sure if she wanted to work in the field. While contemplating her career path, Nine realized that regardless of what she was considering doing, whether that was teaching or non-profit work, she would approach these fields philosophically. Her desire to know the theoretical basis of these other fields she was considering pursuing indicated her inclination towards the why questions. Because her mind works in an introspective, analytical way, she decided to pursue her Ph.D. at the University of Arizona.

This is how Nine became interested in the issue of distance and location, and how that affects how we should treat each other. For example, political philosophy gives a means to justify political institutions, such as democracy. Further, it gives the means to explore why some people may think certain institutions work better than others, like why Americans may believe that a democracy is better than a monarchy. Political philosophy also involves questions of justice. Nine is interested in the application of political philosophy to physical location or place. Something that was an inspirational argument when Nine was a graduate student was that distance and location have no place in understanding how people should treat each other.

“There are all these horrible things happening all over the world, why is it that we should not care about those things?” she said. “Why should we invest our money in America, or help American children, or invest in American schools when there’s people on the other side of the world that are so much worse off? If we feel that there is such an emphasis on human life and relieving human suffering, why do we place more of that emphasis on the lives of people that are closer, in physical proximity, to us?”

How close you are to people, Nine said, also has ethical implications, which is a newer idea in philosophy. Nine describes the shape that political philosophy is taking on as powerful and intuitive.

“Physical position in terms of its proximity to suffering is both of utmost importance, and simultaneously not important, she said. “If you have the means to help those that are suffering, you should feel obligated to alleviate that suffering.

The preponderance of these questions about physical proximity and location are the basis of Nine’s first book Global Justice and Territory, 2012.

“There’s a relationship of physical space and distance and the way that physical things are moving,” she said.

Global Justice and Territory deals with whether proximity and distance matter in terms of state borders. In the book Nine explores a preexisting argument: state borders should not matter as they are an antiquated, feudalist system by which the wealthy and the poor are divided, though the book ultimately argues for the importance of state borders. Sharing Territories, her forthcoming book, will be released in early 2022.

“There is something important about sharing territory that wasn’t captured in the view that ‘this group has control over this bit of land and other people can’t have a say in what happens here.’ Because, as we know with a lot of climate change issues that cross borders, it is unrealistic to say, ‘all the way down to the core of the earth and all the way up to the moon, we have claim to this piece of land.’ That’s just not how it physically works.”

In her new book, Nine address the way resources are extracted and how they cross borders.

“For example, rivers are considered shared if at any point it meanders outside of the boundaries of a state,” she said. “The Nile River, which many people in Egypt depend on and have historically based their identity and dependency on, originates in Ethiopia. Ethiopia is building a large dam, limiting the flow of the Nile to Egypt, affecting their access to this major resource. The implications of this dam, the usurpation of this resource, on Ethiopia and Egypt’s relationship, are innumerable. Access to resources within a state’s borders complicates the existence of borders and state’s relations with one another.”

Nine tries to look at real-world cases that push the boundaries of theory of justice and ethics.

Nine said that she finds and explores disciplines that have done the most work laying out what is happening in specific cases in a way that is clearly accessible for people who are not actually in that field, using international law as an example.

“International law has done a lot of work to document what happens in international water ways and reasons why they need to be jointly governed,” she said. “Research for philosophers is reading, and lots of it. Learning the stories of what has shaped territorial rights and our perceptions of boundaries, considering who has the right to a territory, and what has shaped these beliefs is an essential part of this methodology. The fieldwork that provides real-world examples of these philosophical questions often upends what we think we know about a subject matter.”

One noteworthy thing that Nine has discovered through her studies and research is that ratio of women to men in philosophy versus that same ratio in her specific field of interest. In philosophy, she notes, there are not a lot of women. The ratio being comparable to the ratio of women to men in engineering, as a worldwide discipline. In the field of political philosophy, specifically territorial rights, however, the makeup includes more women. Nine is not quite sure why this is the case, but notices when she’s at a networking event, conference or workshop, that many of the leaders and participants are women.

“Women in philosophy tend to be daring and ready to lay claim to their space in the field,” she said. “Evermore, women in territorial rights are making impactful innovations and additions to the discipline.”

Nine enjoys mentoring people and feels that this will be one of her greatest assets to the University and the philosophy department. She has done a great deal of work in paving the way for younger people in the field and is happy to share her mistakes and experience. The staff in the University’s philosophy department should feel like they are where they want to be in their career, according to Nine. She wants to do whatever she can to help them to be successful, which is something she says is not necessarily easy but knows that she can lend a hand. Nine’s office is in the Jones Center. She will not be teaching in the Fall 2021 semester but will be teaching Philosophy 454/654, global ethics and justice, in Spring 2021. She will be incorporating discussions about what home is, displacement, immigration and refugee status.

“Philosophy is a creative field, and the processes by which research is done is not set in stone,” she said. “You have to be willing to step far beyond your comfort zone.”