In pursuit of green, sustainable and reliable energy

Department of Electrical and Biomedical Engineering Assistant Professor Mohammed Ben-Idris is taking a multi-pronged approach to satisfying our energy needs for years to come. 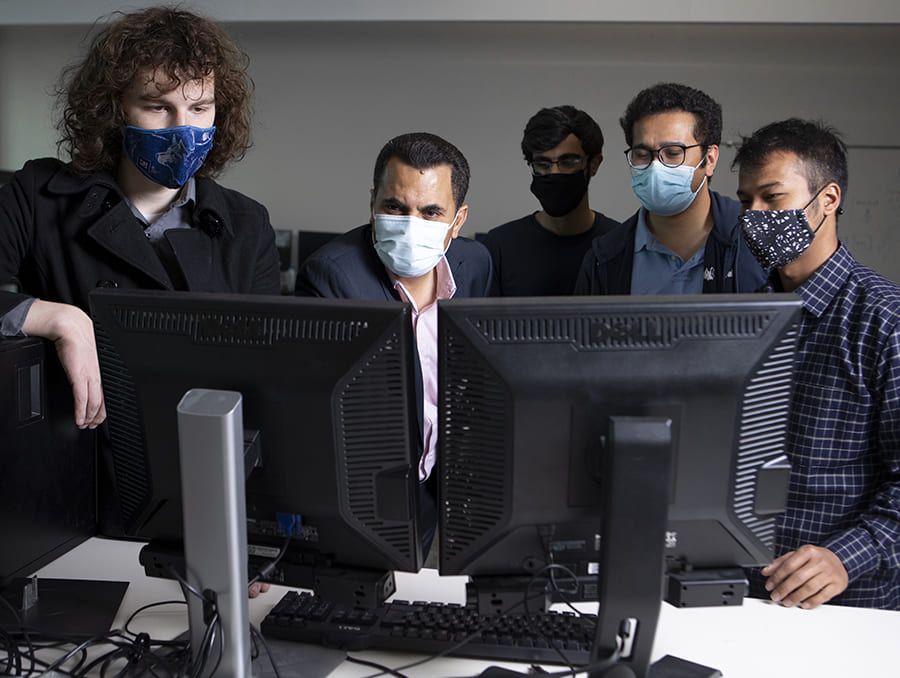 In pursuit of green, sustainable and reliable energy

Department of Electrical and Biomedical Engineering Assistant Professor Mohammed Ben-Idris is taking a multi-pronged approach to satisfying our energy needs for years to come.

When Department of Electrical and Biomedical Engineering Assistant Professor Mohammed Ben-Idris became interested in the power systems field in 1996, it was considered a settled, stable area with little room for innovation. In the past 25 years, however, advancements in computing, developments in electric cars, and countless new technologies from smart phones to cryptocurrency like Bitcoin have resulted in considerably higher energy demands. Meanwhile, concerns over climate change and resolutions to decrease the country’s dependency on oil and coal as sources for energy have pushed researchers and innovators to try to answer what is arguably the biggest question of our time: How do we increase energy production to meet ever-increasing demand while simultaneously decreasing the environmental impact of our energy production and use?

Ben-Idris and his lab have taken a multi-pronged approach to this question, resulting in several related projects in the College of Engineering.

Securing the grid during emergencies

In recent years, green, more sustainable solutions for energy production have proliferated. In certain regions of the world, wind is a promising contributor to energy production, while in Nevada, solar energy will play a large role in meeting the needs of the state. However, an energy system solution using largely—if not solely—these sources brings its own challenges, as Ben-Idris explained.

“Wind is variable, and solar power may be in abundance in the day, but not at night,” Ben-Idris said. “And as heat goes up, the efficiency of solar panels goes down—as solar panels heat up too much, lots of energy is required to cool the panels down. This is a challenge in hot regions. In Nevada, we have high-quality solar energy. Even so, the fluctuations in energy production makes this source of energy less reliable.”

A surge in solar power during a sunny day, in other words, will do little for a house—let alone a community—in the middle of the night, unless the solar energy captured during the day can be stored until it is needed. This challenge becomes a matter of life and death when considering disaster situations. Some states seek resilient solutions for seven days after a disaster.

To provide similar resiliency to northern Nevada, Ben-Idris is working with the City of Reno to provide solar power energy storage solutions that will keep power flowing on during any potential disaster. The initiative is under the umbrella of the U.S. Department of Energy’s National Renewable Energy Laboratory (NRL), which has as one of its objectives the development of new applications and storage methods of solar energy. Together, the City of Reno, the Ben-Idris lab, and Ameresco, with support from NV Energy and the Governor’s Office of Energy, have formed a research coalition and joined the NRL’s Solar Energy Innovation Network.

At the time of the announcement, Innovation Network leader Eric Lockhart said, “We selected teams that are experimenting with creative, promising ideas to use solar power in rural communities or in commercial-scale applications. The work of these teams will provide a blueprint for other communities pursuing novel applications of solar energy.”

Read the original announcement from the City of Reno.

Securing the grid against cyber-physical attacks

In 2019, Ben-Idris was awarded a National Science Foundation CAREER Award for a project entitled Reliability and Resilience Assurance of Cyber-physical Energy Systems. The prestigious grant allowed Ben-Idris to pursue research designed to secure energy grids during potential cybersecurity attacks and enhance their resilience against extreme weather events. Because energy systems are increasingly reliant on computation and computerized control systems, they are susceptible to strategic cyberattacks that can bring the system down with little time for system operators to react.

“These are low probability, high impact potentialities,” Ben-Idris said. “An attack on a power grid system would have to be executed by someone very knowledgeable in the system and with the sponsorship of an agency. It is a long-term project to exploit an identified vulnerability. Other researchers are working on preventing cyberattacks from happening in the first place. Our research is preventing attacks from causing a large impact on the energy grid.”

With a model cyber-physical energy system built in his laboratory in the new William N. Pennington Engineering Building, Ben-Idris is analyzing the possible impacts on the physical structures that would arise from such a cyberattack.

“We have built a real-time digital simulator to simulate real power grids with data from utilities. The simulator resembles a real power system, but its communication network is isolated from all other networks to allow real testing of simulated cyberattacks,” Ben-Idris said. With this “sandbox,” Ben-Idris can identify the potential ways that a cyberattack would propagate through the physical infrastructure of the grid and revert the chain of attack to isolate the attack and ensure it doesn’t spread to bring down an entire power system.

Although the United States has not suffered from a debilitating cyberattack on its power systems, such an attack in 2016 brought down the entire power grid of the Ukraine.

“The attackers sent an email, a file was downloaded, and the attackers could see everything,” Ben-Idris said. “Luckily that hasn’t happened in the United States, and such an attack is unlikely to bring the entire grid down because of its size and complexity—really, it isn’t a single grid; the ‘grid’ is actually many grids—but it is important to prepare for targeted attacks that could bring some systems down.”

Inspiring the next generation of power systems engineers

While much has changed in the power systems field since Ben-Idris was first drawn to it in 1996, he believes that sustainable, transformational advances will take longer than a single generation of engineers. With that belief in mind, Ben-Idris is establishing a Research Experience for Teachers site, a National Science Foundation-funded six-week program that will provide middle and high school teachers with a stipend to work with Ben-Idris, co-PI and Associate Professor of Electrical and Biomedical Engineering Hanif Livani, and their colleagues on hands-on clean energy research. In addition to providing teachers with research experience, the RET site—“Next-generation Clean Energy Sources and Storage”—is designed to impact middle and high school curriculum.

“We want to bring teachers to campus for six weeks to learn and to help develop solutions to the research challenges we face,” Ben-Idris said. “Then, they will develop curriculum models that can be used in middle and high schools. We want to tell students about these projects so that when they come to the University, they have the background and experience that prepares them to excel.”

While disseminating information about clean-energy solutions is itself a worthwhile goal, Ben-Idris sees the importance of connecting with middle and high school students as essential for getting another, valuable perspective on the problems he and his colleagues are striving to overcome.

The middle and high school teachers who are selected for the RET site will receive a personal stipend of $8,000 in addition to a professional stipend of $2,000 to purchase supplies necessary to implement new teaching modules. View more information about the program and instructions on how to apply.

Learn more about these and other projects in the E-RESILIENCY Lab.