Celebrating the Basque Diaspora with the addition of a statue

The William A. Douglass Center for Basque Studies at the University of Nevada, Reno celebrated the donation and relocation to campus of noted statue on Basque Diaspora Day 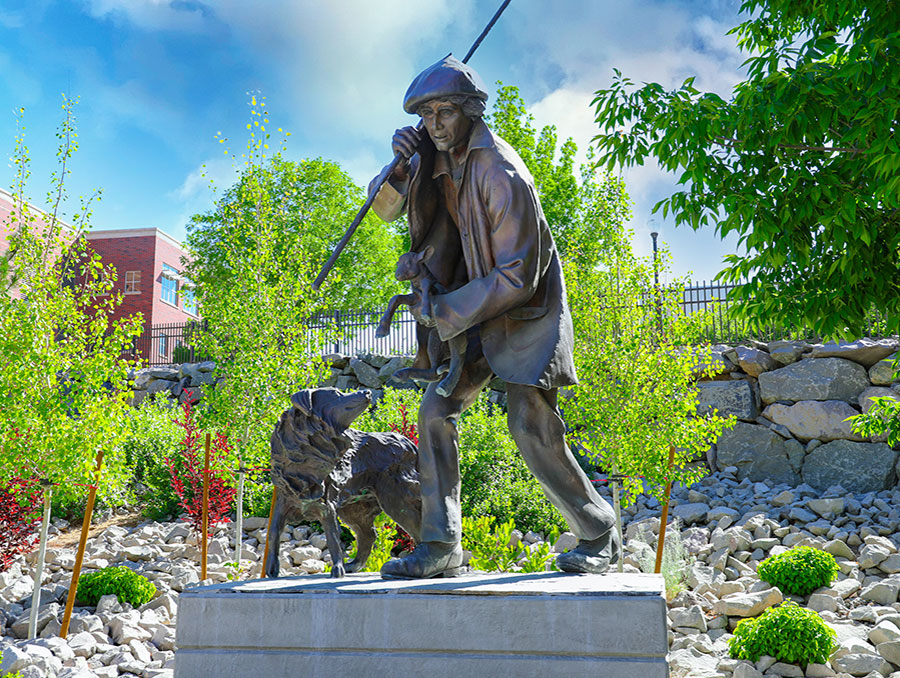 Celebrating the Basque Diaspora with the addition of a statue

The William A. Douglass Center for Basque Studies at the University of Nevada, Reno celebrated the donation and relocation to campus of noted statue on Basque Diaspora Day

The William A. Douglass Center for Basque Studies in the College of Liberal Arts hosted an outdoor program and reception at the University of Nevada, Reno celebrating the Statue of the Basque Sheepherder on the Day of the Basque Diaspora, Wednesday, Sept. 8.

The celebration included traditional Basque music and dance as well as reflections from Michonne and Stephen Ascuaga. A brief program honored the memory of their parents, Rose and John Ascuaga, and the many Basques who emigrated to the American West. The statue of the Basque shepherd embodies their values, spirit and stories.

The celebratory event was well attended with over 100 guests from the community. William A. Douglass was among those in attendance and acknowledged for his dedication to the Center and to the Basque community. Stories of love, courage and tears were shared by many recounting their time spent in the Basque Country and the arduous trek westward to find a better life outside of sheepherding. The Ascuaga family was praised as legends in the community while their son Stephen announced he was sure it was John and Rose from above ensuring the wildfire smoke cleared for the enjoyment of the event.

Guests enjoyed traditional dancing, reciting poems in Basque and community gathering after a long-awaited opportunity to come together. It’s clear the statue’s presence on campus is one of great pride to the Basque community and University.

“The life of a sheepherder was tough,” Professor of Basque Studies, Sandra Ott said. “They spent months alone in the hills with their sheep, often at the expense of physical and mental health. But the story of the Basque shepherd is incomplete without that of the Basque women who came out here and worked in the sheep camps.”

The significance of Sept. 8

Sept. 8, 1522, was when Spanish-Basque Navigator Juan Sebastian Elcano, from the Basque province of Gipuzkoa, completed the first-known, single expedition voyage around the globe, that began under the command of Ferdinand Magellan. After Magellan died in 1521, Juan Sebastian Elcano took over as commander of the ship Victoria sailing back to Spain. Nearly three years after the start of the expedition in 1519, Elcano returned to Seville, Spain on Sept. 8, 1522. Now every year on that day, we celebrate the hundreds of thousands of Basques who have migrated all over the world (nearly 60,000 of those living in the United States and over 5,000 residing in Nevada).

As the original owners of the Nugget Casino Resort in Sparks, the late Rose and John Ascuaga commissioned artist and Reno native Douglas Van Howd to sculpt the Basque statue for the opening of the casino’s Basque-themed restaurant, Orozko, in 1998. Van Howd is well known worldwide for his wildlife and western creations. He also sculpted the wolves statue at the entrance of Mackay Stadium at the University. Although he sculpted the Basque statue years ago, he was still very much involved in its relocation and even visited campus once after its move to clean it.

For many years the striking bronze figure of the Basque sheepherder welcomed visitors to the Nugget. It was generously donated to the University and its Center for Basque Studies by the Nugget Casino Resort, now owned by Marnell Gaming, LLC, in 2017. On May 27, 2020, the statue was relocated to its new home, beautifully surrounded by the high desert Nevada landscape, where it now greets students as they walk past on the University’s campus. (Unfortunately, due to the COVID-19 pandemic, the statue was not properly celebrated until 2021).

“Robert Laxalt’s much beloved memoir, Sweet Promised Land, and our celebration today speak not only to all first-generation immigrants who made their way west – they speak broadly to the journeys and experiences of all immigrants from diverse cultures, ethnicities and religions who came to America, who toiled, endured countless hardships and contributed so much to the shaping of our country,” Ott said.

It took a village to move the statue. And now the statue returns the favor by looking over its village. Similar to the Basques who migrated west seeking a better life, the students on campus too are seeking a better future, and the sheepherder statue will welcome all who strive.