Sandoval's first State of the University: A nod to history and big goals for the future

Address also included the investiture of Sandoval as 17th president 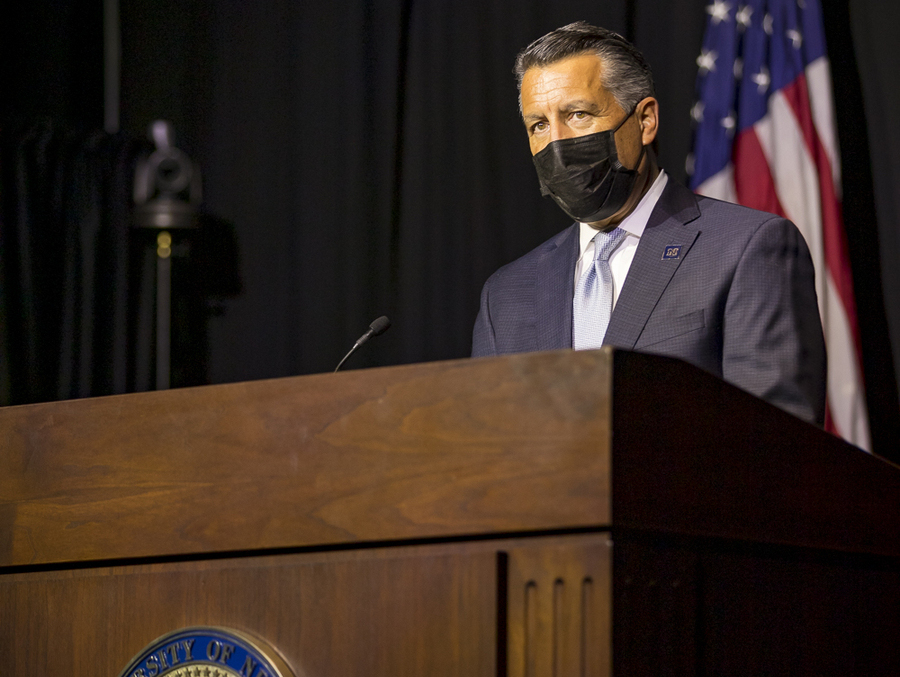 Sandoval's first State of the University: A nod to history and big goals for the future

Address also included the investiture of Sandoval as 17th president

President Brian Sandoval’s first “State of the University” address, which also combined his formal investiture as the institution’s 17th president on Tuesday in the Glick Ballrooms of the Joe Crowley Student Union, shared a number of ambitious institutional goals, some of which he admitted were “audacious.”

“Every audacious goal seems impossible,” Sandoval, who wore a mask, told an in-person masked crowd of about 150 people. “Until it happens.”

Sandoval’s goals for the University included short-term milestones – reaching a record 23,000 students by 2025, achieving the federal classification as an “Hispanic Serving Institution” with 25 percent of overall Latinx enrollment, strengthening the University’s foothold as a Carnegie R1 “Very High Research” institution – as well as the longer-term, aspirational goal of becoming of one of the 66 institutions who are members of the Association of American Universities.

“AAU membership will not happen overnight,” he said. “It will take years of strategic planning, investment and teamwork. It will require us to continue the journey we have already embarked upon … but with more scale and purpose.”

Sandoval, a former Nevada governor who was appointed president of the University on Sept. 17, 2020, said the past year as the institution’s chief executive had shown him enough “acts of grace and goodness to last a lifetime” during an historically challenging pandemic. During his 39-minute address he praised the University’s students, faculty and staff for the numerous sacrifices each had given during the pandemic.

“All of you, the entire University, has delivered during a time of uncertainty, of disruption, of loss,” he said. “A time when Reno, northern Nevada, and the state of Nevada needed the work of every single person on our campus to continue to make the promise of a better, more hopeful future, real and whole again.”

Sandoval said the University will have to continue to make careful decisions and be judicious in planning as the world continues to struggle with the uncertainties of the pandemic. He encouraged all members of the University community to participate in the University’s Strategic Planning process, which commenced in earnest during the fall semester with “listening visits” by the president and Provost Jeff Thompson with all of the University’s schools, colleges, divisions and units.

“We want this process to reflect in every way our public priorities for the future, with clear goals that steward our resources – human, physical and financial – in the most effective way,” Sandoval said. He added that the campus, if they hadn’t already been part of the listening visits, could share ideas and see what visits were still to come on the University’s recently launched Strategic Planning website.

Sandoval said the biggest short-term challenge for the campus – in addition to the volatility of the pandemic – were budget considerations for the current biennium. He said that although the fall enrollment was “good” at 21,034 students that were counted as part of the University’s census earlier this month, student credit hours are down, by about 1.5 percent.

Student credit hours, coupled with reduction in salary and operating funds that were not restored during the last legislative session, have meant that the University has had to reduce state-funded positions that would’ve otherwise been available.

Even with the funding limitations, Sandoval said he was optimistic about the future of the University.

He noted the University, which has 43 percent of its overall student body identifying as students of color and 48 percent of this year’s freshman class identifying as students of color, must continue to have a great degree of intentionality in continuing to improve diversity on the campus, which “speaks to the very heart of our mission as an institution of higher education.”

He said with the soon-to-happen hiring of a director of indigenous community relations, as well as realization of the most recent legislature’s action to ensure tuition fee waivers for members of the indigenous community, protections for DACA students to maintain scholarships, federal grants and college tuition and savings programs and the expansion of tuition fee waivers to the children and spouses of members of the Nevada National Guard, all were part of a “quest” on which the University “mustn’t waver.”

“Our University, the University of Nevada, Reno, needs to always be a place where all voices are heard, all experiences are affirmed, and all who are here know they are always welcome and appreciated,” Sandoval said.

Prior to giving his “State of the University” remarks, Sandoval participated in the investiture ceremony along with his wife, Lauralyn.

Cathy McAdoo, chair of the Board of Regents for the Nevada System of Higher Education, presided over the ceremony.

She said that in the year Sandoval had been president, it has been obvious that he has worked “as we have come to hear him say often since his first day on the job” that “the University is the place where every student can become whoever it is they wish to be, and it is the place where they can make any dream a reality.”

McAdoo praised Sandoval’s leadership and interpersonal skills as well: “There has been a pandemic, as well as the University’s return to full operations. Throughout it all he has been able to make sure the Wolf Pack Family remains safe and healthy as the campus, community and all of Nevada continue to face an historically challenging pandemic.

“He has proven to be a leader who cares about the people of this University. I believe people on this campus who have had the opportunity to talk and meet with him would agree that there are few people who take a more genuine interest in their hopes and dreams than he does.”

As has been the tradition for other presidential investitures – which normally have been held as separate ceremonies, but due to budget and pandemic considerations, Sandoval opted not have a separate ceremony – McAdoo then presented the University’s 17th chief executive with the official symbol of University leadership, the president’s medallion.

During Sandoval’s State of the University address, he referenced another inauguration during the University’s 147-year history, including the words of University President, Joseph Stubbs, who served as the institution’s third president from 1894-1914.

Sandoval quoted words from Stubbs’ inauguration in September 1894, that, “If the colleges be true to themselves, they never grow old … The ideal university … is an embodiment of the best spirit of the age.”

“I truly believe,” Sandoval said, noting the extraordinary work that students, faculty and staff had done during the pandemic, “that our University is the embodiment of the best spirit of our age.”