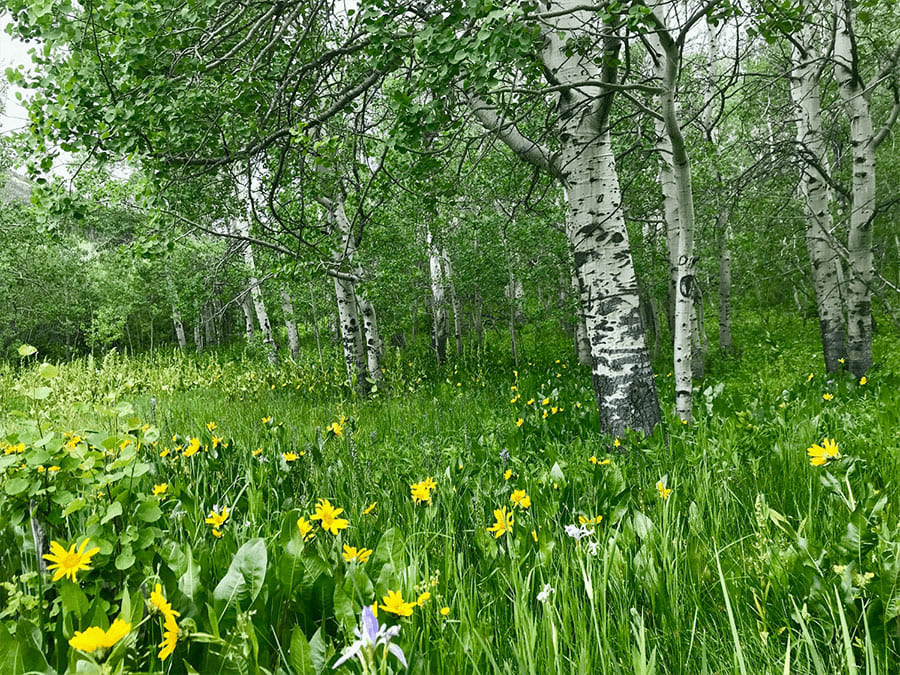 While forests of pine and fir trees get a lot of attention, the more ubiquitous and colorful quaking aspen is a keystone species that is experiencing substantial increases in mortality and decreases in growth over the past three decades across most parts of its geographic range in North America, a study at the University of Nevada, Reno found.

"Human-caused climate change is an unavoidable reality, and our research findings clearly indicate that it is a major driver of aspen decline," Hall Cushman, co-author of the study, said. Cushman is an ecology professor in the Department of Natural Resources & Environmental Science, part of the University’s College of Agriculture, Biotechnology & Natural Resources.

For the research, Cushman and his former post-doctoral researcher Tyler Refsland used long-term data from the U.S. Forest Service's forest inventory program that included 4,000 plots of aspen where individual trees are marked so that each tree can be followed, and actual death rates and tree biomass can be seen. Cushman and Refsland found that aspen mortality is increasing in most habitat types, and the abundance of trees has been steadily decreasing over time.

"Aspen are the engines that shape the landscape and hydrological processes with an astounding effect on ecosystems," Cushman said. "They are important to biodiversity and water processes, as well as economically important to humans. They are biodiversity hot spots for both plants and animals."

Observations of large-scale, episodic dieback of aspen, especially after drought that is accompanied by warmer temperatures, have been concentrated in the drier margins of the species’ range, including the southern Rocky Mountains, the Arizona/New Mexico mountains and the prairie park land region of Western Canada, but dieback has also been observed in wetter regions. Besides growing in these dry environments, aspen also grow in Alaska, New England, Canada and other wetter areas on the continent.

"Aspen, one of the few deciduous tree species in Western U.S. forests, has the largest geographic distribution of any other tree species, and they are declining in each area," Cushman said. "We've compiled a rich data source over an incredible range."

Their study, "Continent‑wide synthesis of the long‑term population dynamics of quaking aspen in the face of accelerating human impacts," was published, with Refsland as the lead author, in the peer-reviewed science journal Oecologia, which publishes innovative ecological research of general interest to a broad international audience.

"Typically people think of conifers when they think of forests in the West, but aspen are deciduous trees that form islands in a coniferous sea," said Cushman, who also is a faculty member specializing in climate change ecology in the University's Ecology, Evolution and Conservation Biology interdisciplinary program. "They are sequestering more carbon, capturing more precipitation and holding onto this water through their extensive root system, more so than other trees. And, they are resilient to fire, more so than conifers, usually bouncing back more quickly."

Projected changes in climate and other environmental drivers are expected to further jeopardize forest ecosystems by promoting more widespread, severe and frequent mortality events, with major consequences for biodiversity, ecosystem services and feed-backs to climate change through loss of carbon sinks.

"Our findings from a cross-continental plot network suggest that new tree growth is not keeping up with mortality rates, and without increased rates of colonization and/or regeneration of the tree stands, our results signal a continued decline in aspen abundance in the Western U.S.," he said. "There are episodic diebacks, and the next generation are not exactly rocketing along."

Despite ongoing efforts at mitigation, all predictions suggest that climate change will intensify in the coming decades, not boding well for the quaking aspen, the authors conclude.

"Thus, it is highly probable that the trends in aspen demographic rates that we have reported in this review will continue and likely intensify in the future," Cushman said. "Indeed, we should expect to witness major changes in the structure and composition of aspen-inhabited forests, with these being especially important in the Western U.S., where aspen is the only dominant broadleaf tree species. The reduced dominance of aspen will probably lead to critical declines in many ecosystem services, including the maintenance of plant and animal biodiversity, and will have effects on a range of ecosystem-level processes."

While their review of the literature revealed that increased aspen mortality and reduced growth rates were most often associated with hotter, drier conditions, they found that reduced recruitment, or establishment of new plants, was most often associated with damage from animals and insects that feed on plants, including everything from aphids, caterpillars and moths, to ground squirrels to large elk.

"Are aspen doomed? That's a difficult question to answer," Cushman said. "In the West, increased heat and drought are going to be our reality for the foreseeable future. Even if global greenhouse gases are reduced, there is still a lot of pessimism about aspen future, since it's a water-loving tree. If such trends are not accompanied by increased recruitment, we expect that the reduced dominance of aspen in forests will lead to major declines in the many essential ecosystem services it provides."