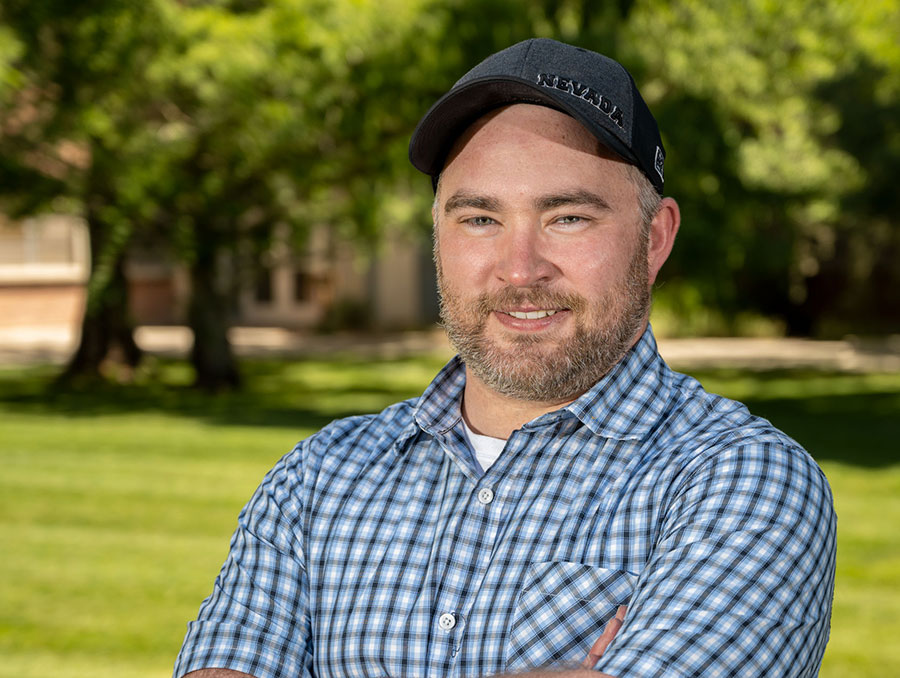 The University of Nevada, Reno recently welcomed Assistant Professor Andrew Hess to the Department of Agriculture, Veterinary & Rangeland Sciences. Hess will be focusing his research on innovation in breeding and genetics using University herds and flocks.

As part of the University’s Experiment Station, Hess will be working with cattle and the 1,800 head of Rafter 7 sheep at the Great Basin Research & Extension Center located in Eureka. The Rafter 7 sheep, initially developed about 30 years ago at the University’s Experiment Station under the direction of Professor Emeritus Hudson Glimp, are famous for their fine wool and heartiness on marginal grazing lands. The Center, which opened last summer, addresses the related issues of sustainable grazing management of dryland rangelands; livestock and crop production under water-limited environments; and alternative water and irrigation strategies for crop production.

Hess will be conducting genetic research to breed animals that are more resilient and adaptable to climate change and disease. He is also collaborating with the United States Department of Agriculture on multiple projects, including studying the litter sizes of lambs born into highly prolific sheep breeds and researching internal parasites of sheep. His research will benefit herds across northern Nevada by increasing their resilience while requiring less intervention to maintain high levels of performance.

Hess will also be continuing work that he started during his post-doctoral position at AgResearch, one of New Zealand’s Crown Research Institutes. There, he worked with a variety of animals, such as goats, deer, sheep and mussels, to identify genetic markers that can be used to more accurately select animals for production traits.

He graduated from the University with his B.S./M.S. degree in biotechnology and is excited to return after having earned his doctoral degree at Iowa State University.

“I grew up in Nevada and attended UNR, so this was a great opportunity to work close to home,” Hess said. “I’m excited to serve the community that helped me get where I am today.”