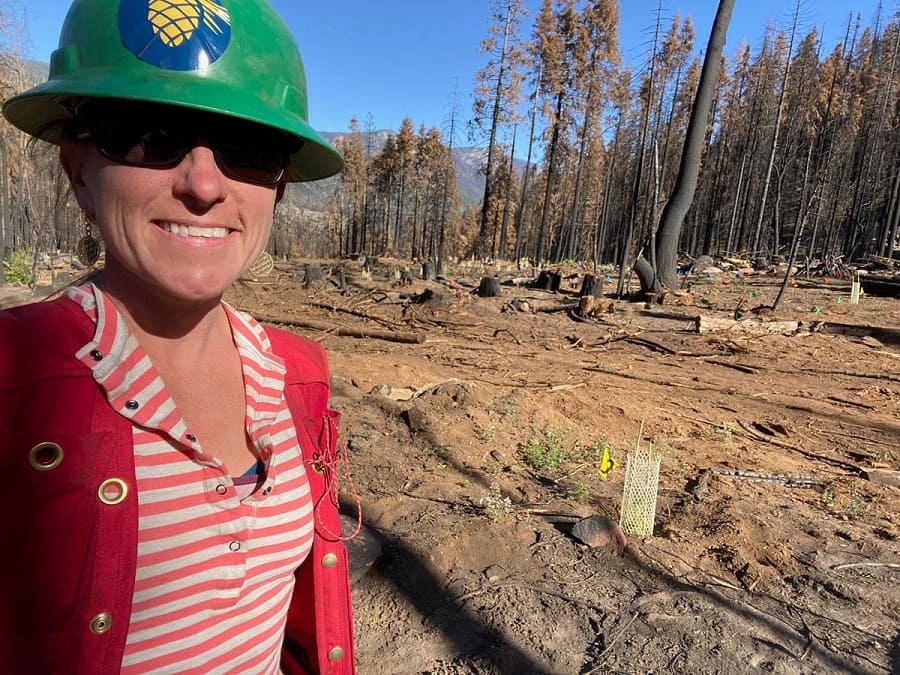 The Sierra Nevada Adaptive Management Experiment (AMEX), a University of Nevada, Reno-led forest management experiment, could not be more timely nor more critical as the region experiences another summer of megafires and enters a period scientists refer to as “the Pyrocene.” This Pyrocene is driven by an accumulation of fuels in forests (think of wood in your fireplace) following a century of fire suppression and compounding effects of rapid, ongoing climate change.

This Sierra Nevada-wide experiment is led by Sarah Bisbing, forest ecologist at the University of Nevada, Reno, who describes the goal of the research as promoting “forest persistence.” In other words, making sure forests and the services they provide are protected into the future. This experiment is designed to identify forest management options that withstand or recover from disturbance as well as to shed light on which tree species should be planted in reforestation efforts.

“We’re testing three different methodologies for potentially mitigating the effects of the legacy of fire suppression as well as ongoing climate change,” said Bisbing, assistant professor of forest ecosystem science in the University’s College of Agriculture, Biotechnology & Natural Resources. “The experiment is fully replicated at [three core sites] across the Sierra Nevada so we can ask, ‘within a given location, is treatment A more effective than treatment B, and then across the Sierra Nevada in the same forest type, if treatment B is more effective at site one, is it also effective at site two, three, and so on?’ And, at a total of seven sites, we reforested with different species and different seed sources to ask which will survive these conditions.”

Managers at two of the core experiment sites, CAL FIRE’s LaTour Demonstration State Forest and UC Berkeley’s Grouse Ridge Forest, have completed the experimental forest management treatments. CAL FIRE’s Mountain Home Demonstration State Forest site was on track to be implemented, but unfortunately burned in the 2020 Castle Fire before the project team could conduct any forest management. This fire is estimated to have killed over 10% of the world’s giant sequoias population.

“To put so much work in getting funding, selecting sites, working with foresters, collecting data and marking our trees. Getting all the way to the point where you’re going to do [the experiment] and then having [a site] burn was pretty defeating,” Bisbing said.

Despite this “incredibly challenging” setback, as principal investigator, Bisbing quickly began rethinking the study to leverage both the data and burned site as sources of knowledge on past fire management and fire effects. An example of the revised research is a fire effects and mortality assessment on giant sequoia, a species native only to the Sierra Nevada but abundant within the study sites area, to determine whether historic forest management affected survival of old-growth trees. Bisbing is additionally working closely with CAL FIRE to identify a path forward for the AMEX site at Mountain Home, which would leverage the Castle Fire as a managed wildfire to meet forest management objectives.

These challenges have been balanced, gracefully, by successes in other aspects of the study. In Spring 2021, Bisbing and the AMEX Team planted approximately 30,000 seedlings across the AMEX sites and leveraged the 2020 North Complex and Creek Fires to identify species and seed sources for such things as post-fire restoration. Crews planted five of the most common trees of the Sierra Nevada mixed-conifer forest and are tracking growth and survival over time. At summer’s end, roughly 93% of the seedlings are still alive, with cooler, wetter sites having the highest survival thus far and Jeffrey pine emerging as the reigning king of survival across all sites.

While incense cedar and giant sequoia are faring the worst, upcoming winter conditions and the next few years of summer drought-stress will determine the ultimate winners. These early findings provide a glimpse into the potential outcomes of reforestation efforts, and the application of the knowledge gained in this study may be used to re-evaluate current reforestation practices in order to better prepare forests for current and future conditions. Bisbing further noted that prior beliefs on best practices are being challenged.

“The assumption has been that locally adapted seeds – seeds grown in their home environment – are best adapted for local conditions,” she said. “We’re finding that local seeds are now no longer adapted to their home locations because the climate is changing so rapidly. The environment the seed is adapted to is not the same as that it is falling on.”

Bisbing added that although climate change is a factor in the state of our forests, including the recent catastrophic wildfires, it is part of a larger issue with several other causes, such as human intervention and ill-informed forest management practices of the past.

“We have all of these compounding, complex, interacting factors, and then we have pretty extreme climate change on top of that,” she said. “When we see fires going through, it breaks the heart of all the forest and fire ecologists because while fire can benefit those landscapes, it’s burning so out-of-character that not only is it bad for us and our health, homes and livelihoods, but it’s bad for our forests.”

Even though the effects of wildfires have become more prevalent recently, Bisbing highlighted the importance of the research being done so forests can have a more positive future.

“Amidst all this smoke and fire around us, there are people at [the University] doing things to help forests recover and help us maintain forest landscapes, despite climate change and these catastrophic wildfires,” she said.

Bisbing also serves as the director of the University’s Whittell Forest & Wildlife Area and occasionally acts as an on-site consultant for forest managers and fire officials.

AMEX is made possible through funding from California Department of Forestry and Fire Protection as part of the California Climate Investments Program. Many collaborators in the fields of research and forest management are involved from the University, UC Berkeley and CAL FIRE.  To learn more about the project, visit the AMEX website.