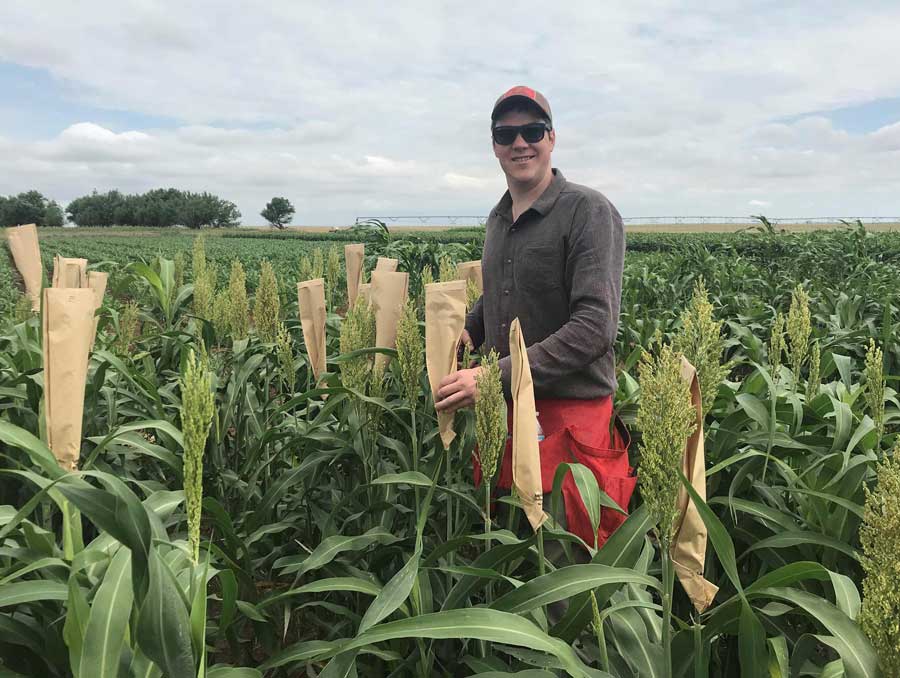 When Melinda Yerka came to the University in 2017 as an assistant professor in the College of Agriculture, Biotechnology & Natural Resources, she knew she wanted to work with fermenting sorghum. John Baggett, who earned his bachelor’s degree in Biochemistry & Molecular Biology at the University in 2015, also returned to pursue his doctorate because he wanted to study the biochemistry of fermentation. Together, and funded by $650,000 in grants, the pair are investigating new sorghum varieties emerging from Yerka’s breeding program.

“Sorghum is gluten free,” Yerka said. “John, who previously conducted research and development with barley-based beer recipes at the Depot Craft Brewery and Distillery in Reno, had seen a demand for gluten-free beer.”

Sorghum beer has been produced in African countries for thousands of years. However, they’ve always used traditional methods, and none of those methods have been standardized or commercialized. Only recently has South Africa’s University of Pretoria begun looking into standardized, commercial methods.

In the last couple of years, University of Queensland in Australia investigated new methods, but nothing has been published, and one of their lead researchers moved to University of California, Davis last year.

“We are right on the heels of Australia in terms of developing new varieties and new malting and brewing techniques that we could use for this,” Yerka said.

In the United States, there are others studying the use of sorghum for beer, but none of them are universities, so their methods and results would be proprietary and not available for comparison by others.

Last year, the Yerka Lab received a $500,000 grant from the U.S. Department of Agriculture – Agriculture and Food Research Initiative. The grant allowed the team to partner with the Texas-based sorghum production company Richardson Seeds to breed new varieties and examine the genetics of desired traits.

Through crossbreeding, the company had already developed varieties that grew well and had both disease resistance and high yield. But they didn’t have the means of pinpointing exactly which genes to look for to fine-tune their breeding process. So, the company provided samples of the varieties to the Yerka Lab, where Yerka, Baggett and their team sequenced the DNA and are now comparing it to the DNA of new varieties in Yerka’s breeding program. This process will help develop new sorghum varieties that are specifically tailored to commercial beer production.

“It benefits both us and Richardson Seeds because when we develop markers for specific genes in our varieties, the company can use those markers to improve their own varieties,” Yerka said.

From crop to craft

This year, Yerka and Baggett received an additional three-year, $150,000 grant through the College’s Experiment Station unit to dig even deeper into malting and brewing sorghum. The additional grant allowed the team to form more partnerships to grow and test Richardson Seeds sorghum in different environments across northern Nevada and California and compare their performance to popular barley varieties.

“We’re looking for the right combination of grain traits while also assessing the stability of those traits in different environments.”  - Melinda Yerka

“We’ll be fermenting these sorghum and barley varieties to see how their production environment impacts the flavor profile and makes the best beer. We also want to know how similarly barley grain and sorghum grain act during malting and brewing, as this will help us optimize methods that are specific to sorghum.”

To fine-tune their methods, Yerka and Baggett partnered with UC Davis’ Glen Fox, Anheuser-Busch endowed professor of malting and brewing sciences. Fox, who previously worked for University of Queensland in Australia, is helping the team in the malting and brewing steps. Some of the things they are looking for include different starch contents, levels of protein digestibility and new flavors. To do this, the team is investigating the different grains’ metabolites, or the flavor molecules that are produced when the grain is fermented. During the fermentation process, certain genes produce proteins, which then break down molecules into the metabolites, which give the beer its flavor.

“Are some environments better for growing sorghum for beer than others? Are certain varieties better or more tasty than others? Those are the questions we’re asking,” Yerka said. “We can map the flavor molecules back to the proteins, then map the proteins back to the genes to help us fine-tune the breeding process.”

Yerka and Baggett are also working with Maninder Walia, assistant professor and field crop specialist with the College’s Extension unit, to partner with local farmers to test commercial-scale production methods for the sorghum in northern Nevada. The new varieties from the breeding program will be finished this fall, and the next step is malting and fermenting to check their performance and quality. The team will work with Arne Martin, owner of 40 Mile Malt in Fallon, to malt the grain prior to brewing. From there, the team will partner with local businesses, including the Depot Craft Brewery and Distillery, to have consumers taste-test the flavors.