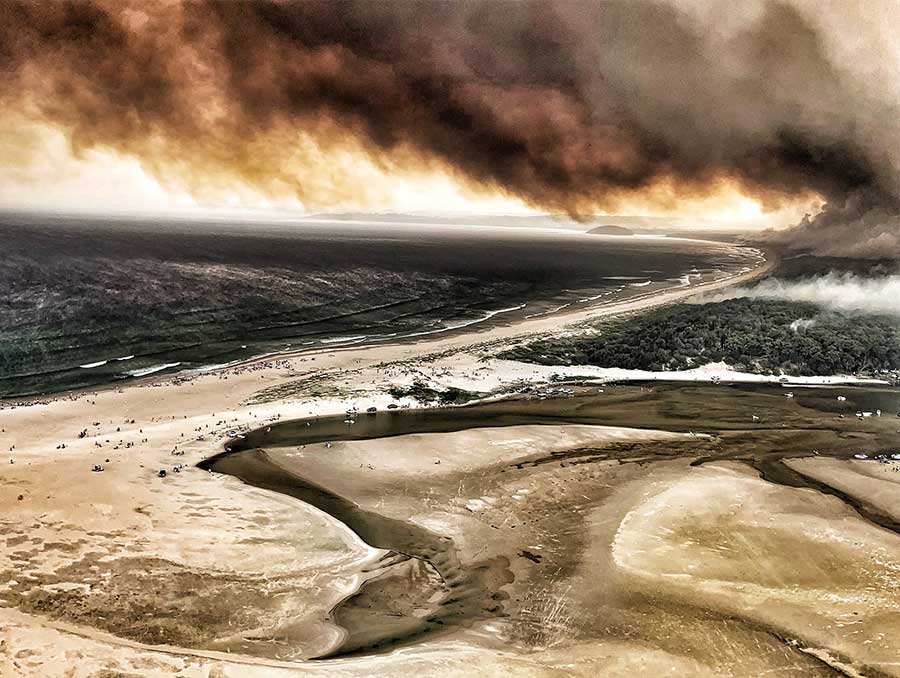 "I am not surprised that Matt volunteered to help out with the wildland fires in Australia," Tamzen Stringham, a professor with the College of Agriculture, Biotechnology & Natural Resources, said. "He is a good-natured individual who is truly interested in the ecology and management of rangelands."

Petersen learned a lot about the subject as a student in the College's Rangeland Ecology & Management Program.

The University-taught program was developed by Stringham and fellow University ecologist Devon Snyder, with support from the College's Experiment Station. It helps Bureau of Land Management fire professionals to protect and restore Nevada lands.

Although the program is crafted for arid-land fire professionals, its information is helpful in a variety of situations.

For example, Stringham said the program "provided Matt with knowledge of fire effects on vegetation and soils, along with the knowledge that fires burn across a diversity of landscapes and rehabilitation is not a one size fits all proposition."

The educational program for Nevada, through Petersen's volunteerism, has now helped Australia too.

Petersen is a fire management specialist with the United States Forest Service's Humboldt-Toiyabe National Forest. He is detailed into the fire management office of Bureau of Land Management Nevada and works as an air tactical group supervisor.

In Australia, Petersen worked with the large air tanker program.

"They send folks every time that we ask and they come here and they do a great job," he said, "It was nice to return the favor."

He helped to even the odds in the fight between fire professionals from Australia, Canada, New Zealand and the United States and the fires raging across the land.

Of the experience Petersen said, "It's Alaska-sized fires burning in a California-type environment where there's just homes and communities everywhere and not enough people to touch every bit of the fire."

One moment in the fight struck Petersen as particularly memorable. It was when the south and central coasts were being evacuated.

"They called us down to help ease the fire front as it's hitting thousands of people driving on the highway," he said. "So we were directing air tankers and showing them where to drop so people could get out of there and get out of being trapped in their vehicles."

Petersen's help in that moment came at a much-needed time for the highway's motorists.

He also arrived at a much-needed time for his fellow firefighters, in December and January. This was after the local firefighters, often volunteers, had been working non-stop since August, and just in time for Christmas.

"It was nice to go down there and give those guys a break," Petersen said. "Especially during the holidays so that we can be there working while they get to spend time with their families."

He said, "My kids wrote letters to Santa so we could do Christmas when I got home."

A list of award winners; annual ceremony to be held at later date during fall semester

Director of Financial Aid Tim Wolfe breaks down how to apply for CARES Act funding, what the money can be used for and more

Planning for the Return of the Pack: Phase 2