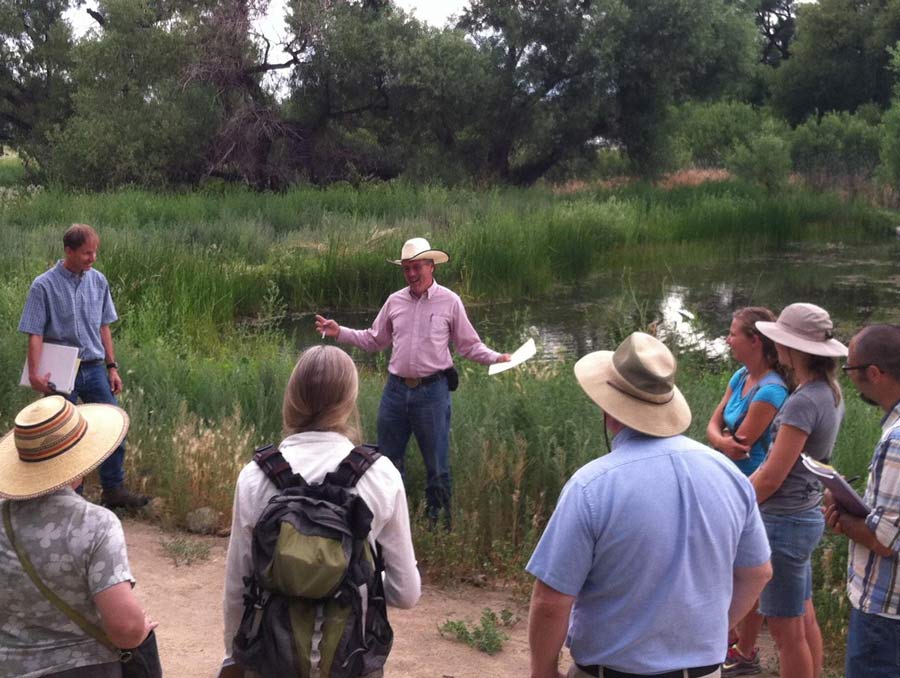 As Sherman Swanson, professor emeritus with the University, begins his new journey in retirement, he leaves behind a more than three-decade legacy.

Swanson joined the College of Agriculture, Biotechnology & Natural Resources in 1983 and immediately began educating others about proper rangeland management. His work not only included teaching students, but also conducting research as part of the College’s Experiment Station unit and engaging with Nevada communities and stakeholders as part of the College’s Extension unit. Over the next 36 years, he balanced teaching undergraduates and graduates as a professor; studying relationships among land, water, fire, plants, animals and humans in rangeland and riparian areas; and teaching Nevadans about keeping rangeland and riparian ecosystems operating properly.

“Swanson was well-known throughout the western U.S. for his passion for healthy riparian systems,” said Tamzen Stringham, chair for the College’s Department of Animal, Veterinary & Rangeland Sciences, where Swanson dedicated the last five years of his time in the College.

Swanson earned his doctorate in rangeland resources at Oregon State University in 1983 before joining the University. In addition to teaching and researching as a College faculty member, Swanson successfully mentored 36 graduate students, and in 2017, he became the first director of the Animal & Rangeland Sciences Graduate Program, a position he held until 2018.

One of his largest and most recent projects as a professor was the revision of the Nevada Rangeland Monitoring Handbook – Third Edition. Originally published in 1984, it aims to guide ranchers, agency personnel and others as they cooperate, prioritize and align short- and long-term monitoring in agreements, contracts, plans and other documents. Swanson led the revision, with additional contributors from Extension, the Experiment Station, and at least 11 organizations and state and federal agencies.

Part of his Extension work included coordinating and publishing the curriculum for and teaching at the Nevada Youth Range Camp, which turns 60 this year. The camp, conducted by Extension in partnership with the Nevada Society for Range Management and multiple organizations and state and federal agencies, provides a week-long educational opportunity for youth ages 14-18. Campers learn about Nevada’s desert, mountain rangelands and diverse ecosystems.

Another highlight of Swanson’s career, and a primary outlet for his passion for healthy riparian ecosystems, is his work with the Nevada Creeks and Communities Team, an interagency and interdisciplinary group dedicated to meeting Nevada's need for riparian management education. The team teaches workshops; writes articles and publications; and works with landowners, land users, and interest groups and agencies.

“Sherm has certainly increased knowledge and improved these critical riparian systems during his time here,” Stringham said. “That’s where his heart lies.”

Swanson has led the Nevada Creeks and Communities Team since 2004. In 2016, the team earned the Soil and Water Conservation Society Merit Award. As he departs from the University, Swanson has no plans for his work with the team to end. In fact, he plans to use grant funding to continue leading the team, striving for sustainable rangeland riparian ecosystems to meet social, environmental and financial needs well into the future.