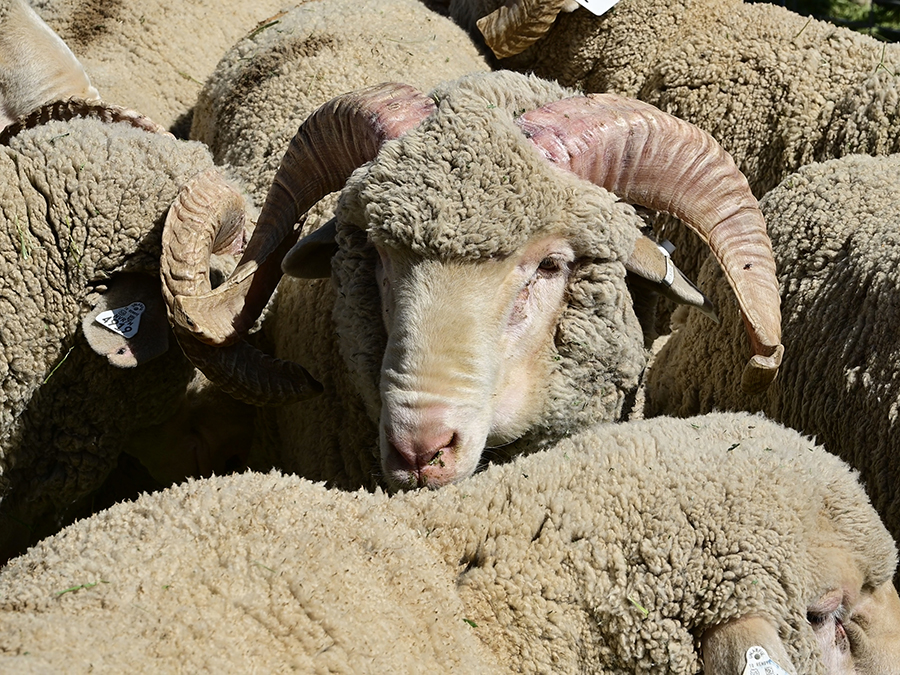 More than 200 sheep were auctioned off at the annual sale of the nationally famous Rafter 7 sheep herd held recently at the Eureka County Fairgrounds, and the first auction that will help fund the University of Nevada, Reno’s new Great Basin Research & Extension Center located in Eureka.

Buyers came from all states adjoining Nevada plus nine others from around the country. There were 85 buyers at the fairgrounds and many buyers from distant states via telephone for the Sept. 12 event that brought in $137,000.

“Overall the auction went well,” Gary McCuin, director of the Great Basin Research & Extension Center, said. “We were about a hundred dollars less than last year’s average of $750 a head. However, given the state of the nation and sheep industry due to COVID, drought and politics, this sale went pretty well.”

The highest price paid for one sheep was $3,100, for a two-year old purebred Merino ram, and the lowest was $500. In all, 183 rams and 30 purebred Merino yearling ewes were sold. The rams were both purebred Merino and the popular Rambouillet/Merino crossbreeds developed in the 1990s by the University. They are not show sheep, and are grown out under harsh range conditions in the high-desert mountain ranges of Nevada.

The herd of 1,800 head of sheep, famous for their fine wool and heartiness on marginal grazing lands, was purchased by the University’s College of Agriculture, Biotechnology & Natural Resources in July, coming full circle after having sold the herd to Rick Powers in 2013.

Bill Payne was hired as dean of the College in 2014. A few years later and with a better economic picture for the College, he showed an interest in reaquiring the herd. A couple of years ago he also began planning for an agriculture center based in Eureka that would focus on research to support the agriculture and livestock industry that would have a statewide, national and international impact. The two ideas merged into what is now the Great Basin Research & Extension Center operated by the Experiment Station and Extension.

“I was very pleased with the auction,” Payne said. “The level of support from the industry and ranchers despite COVID-19, commodity prices, wildfires, and other sources of uncertainty was quite gratifying.”

Payne added that the College had recently hired a sheep geneticist, who will join the College next July, and is currently recruiting a ranch manager to work in Eureka alongside Tom Filbin, the current manager. Other capital improvements and equipment purchases for the Center are underway.

In an article in Sheep Industry News following this year’s sale, Rick Powers said, “I’m excited about the transition. I think that the interest the University has in this flock is historical. It was their baby and their property and I’m very happy that they are interested in bringing this flock home to the University. I believe that this flock has and will continue to have a tremendous impact on the sheep and wool industry in the United States.”

The sheep are both purebred Merinos and Rambouillet/Merino crossbreeds that were initially developed about 30 years ago under the direction of Hudson Glimp, professor emeritus of animal biotechnology at the University’s Experiment Station.

Working with Skip Avansino, and with generous support from the E.L. Wiegand Foundation of which Avansino was chairman, they began building a purebred Merino sheep flock at Rafter 7 Ranch in the Walker River Basin area of northern Nevada.

Before 1989, Nevada had primarily Rambouillet sheep. The animals chosen to establish this new Merino flock were originally based or developed at the Dubois, Idaho U.S. Sheep Experiment Station, then under the management of Glimp.

Glimp and Avansino then purchased 400 yearling purebred ewes that were used to develop the Merino stock in Nevada. Two hundred ewes came from Montana and 200 ewes came from South Dakota, both from ranches considered to be among the best in the Western U.S. Combining genetics from Australian sheep and the Rambouillet, they developed two breeding lines, Merino and the Merino-Rambouillet cross. These two lines have made significant progress over the foundation ewe flock during the crossbreeding and upgrading phase, and came to be recognized as the flagship Merino flock in the Western states.

In 2013, the Wiegand Foundation wanted to leave the sheep industry, and Rafter 7 was sold to Powers. Soon after, because of the 2014 federal buyout of land in the Walker River Basin to maintain Walker Lake water levels, Powers relocated the Merino stock to Eureka County from the Rafter 7 Ranch in Yerington, Nevada.

In Eureka, Powers continued the annual auction, attracting buyers from around the world and continuing the extensive and detailed record keeping, which includes a compilation of records that are used in the sale catalog with details on sire and dam history, as well as the birthing, weaning and wool records on the animals. Estimated breeding values, or EBVs – heritable traits that can be tracked and measured – are calculated based on the Western Range Index as well as Rafter 7 EBVs for wool value, lamb value and combined value.

Each of the rams and ewes sold this year had wool samples taken in August analyzed through an Optical Fiber Diameter Analyzer that measures wool fiber thickness. and Overall wool and production numbers were then computed and analyzed to determine salability. This information was provided to interested buyers.

“One of the unsolicited statements I heard from three or four buyers from Nevada and other states was how much the Rafter 7 Merino sheep program has helped improve wool quality and economics for the range sheep industry, and how appreciative they are that the University has stepped in to carry this breeding program forward,” McCuin said.

“That makes it all worthwhile to me personally and is a direct and positive impact from the University in its land-grant mission,” he said. “From that standpoint credit must also go to Rick Powers, who the sheep were purchased from, and manager Tom Filbin for their expertise in breeding and managing this herd and for organizing and implementing an efficient and profitable event.”

McCuin, who is also the University’s longtime Eureka County Extension educator, has gradually increased his involvement over the last two years to acquire the permits and land base for the College’s new initiative for rural Nevada, and significantly more time in the last year with herd manager Tom Filbin in assistance with determining how the University would accomplish the logistical operation of the sheep.

But, the Center isn’t just about selling sheep. It will also address the related agricultural and natural-resource issues of sustainable grazing management of dryland rangelands, livestock, crop production under water-limited environments, and alternative water and irrigation strategies for crop production. Research will draw upon expertise from the College’s Experiment Station and Extension faculty and staff located across the state. Extension programming and additional projects will adapt to the needs of the community.

“Extension has made a significant financial investment in the Great Basin Research & Extension Center, mainly because the research generated at the Center will be immediately available to producers through Extension,” Ivory Lyles, director of Extension and associate dean for engagement in the College, said.