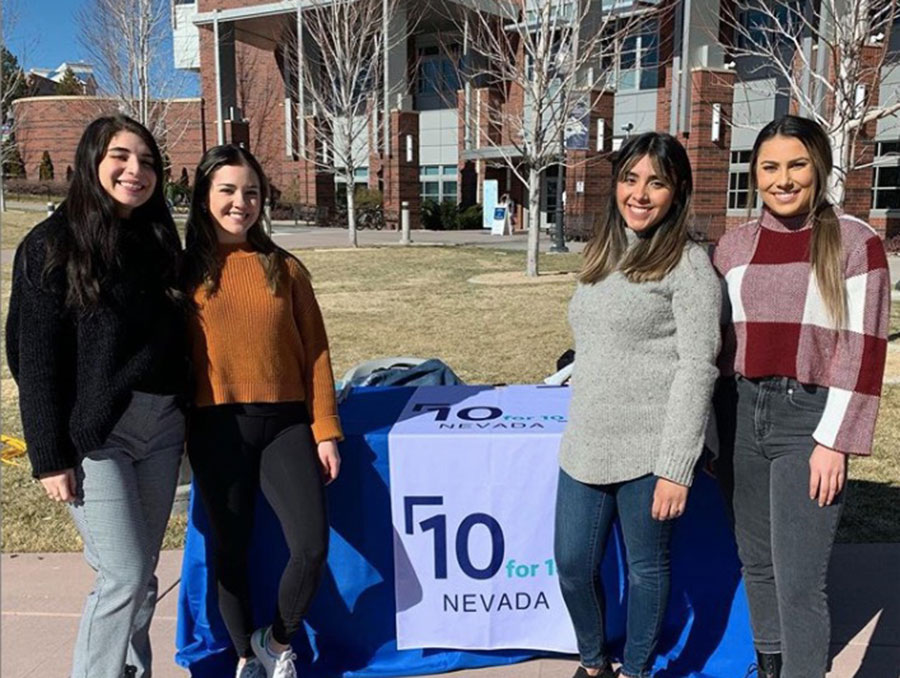 When University of Nevada, Reno students signed up to compete in the Public Relations Student Society of America Bateman Competition and the American Advertising Federation National Student Advertising Competition (NSAC) in fall 2019, they did not expect to complete their work during a global pandemic.

“I thought once you write a plan, you have to stick to the plan, and that is just kind of what it is, but I didn’t realize how flexible you had to be during campaigns,” Melanie Sanchez-Hernandez, a Reynolds School of Journalism May 2020 graduate and the account executive of the Battle Born Bateman team, said.

Working with faculty adviser Alison Gaulden, APR, and professional adviser Rebecca Allured, APR, Battle Born Bateman was one of two teams to represent the Reynolds School. The team members Sanchez-Hernandez, Kylie Daniels, Regina Flores, Molly Appleby and Rachel Ribeiro created “10 For 10 Nevada.” Their campaign aimed to increase awareness of the U.S. Census and to get college students and Latino families with children to pledge to take the 2020 U.S. Census.

The students implemented their plan from February 10 to March 20, 2020. By March 13, the group had finished most of its outreach to the university community. Unfortunately, some communication efforts for the Latino community had to move online as the events the students planned to attend were canceled.

“It was definitely a challenge because we had planned that last week to be in-person outreach to our Latino community,” Sanchez-Hernandez said. “We had to think really quickly about how to shift those events and that one-on-one interaction virtually.”

The group moved its final events onto Facebook. Despite the setback, they won a national honorable mention, placing in the top third of teams in the nation.

“The Battle Born team used their influencers and their community very strategically,” Gaulden, a Reynolds School lecturer, said. “The challenge of writing a plan is really having clarity in the direction you want the campaign to go and really maximizing your community relations to expand your reach.”

According to Sanchez-Hernandez, her team obtained 807 pledges from students and Latino families to take the census and reached almost 40,000 people through social media efforts.

“A lot of the people we did talk to, especially those in Section 8 housing, are immunocompromised, and finding a way to reach them that was safe was a little harder,” Kwan, a Reynolds School junior and the team’s project manager, said, “So one of our main tactics was reaching out to the Reno Housing Authority office and having them push out the information directly whether it be a letter on their doorstep or sending out an extra email.”

Gaulden said both teams learned a larger lesson during the COVID-19 pandemic – how to respond in a crisis.

“Having to pivot in the middle of a campaign to an entirely different approach from what was in your plan and how to manage that professionally and effectively was I think probably the biggest takeaway that each team learned.”

Pivoting from the plan was less crucial for this year’s NSAC team. The 15-student group made up of Reynolds School and College of Business students was tasked with creating a business to business campaign to encourage companies to purchase Adobe’s Experience Cloud.

“Planning the campaign, nothing changed,” Lauren Harrison, Reynolds School May 2020 graduate and account executive for the team, said. “The only thing that really changed is that all of the conversations were virtual, but I wouldn’t say that it was any harder.”

Besides having to meet virtually, her team did experience one other pandemic-related impact. They were unable to film video in person. So, they resorted to Zoom to create their advertisements.

“Normally, we would have shot video spots in the studio in the j-school or on-campus somewhere, but we just rewrote the spot so that it was like a group meeting on Zoom,” Paul Klein, a Reynolds School adjunct professor and the team’s faculty adviser, said. “They were able to invent the whole thing and just kept the wheels moving.”

Their campaign, “It’s in the name,” played on the fact that the word “ad” is in Adobe. The group submitted a digital book and a recorded presentation with their pitch and media samples. The team placed third at district, and Harrison won top presenter.

According to Klein, the team’s targeted media buying approach and effective budget made the campaign stand out.

“I thought our team really excelled on making the effectiveness of every dollar count,” he said. “We were super targeted with where messages were going to be right in front of the media buyers.”

With the two competitions complete, Sanchez-Hernandez, Kwan and Harrison said that the experience helped to improve their skills as strategic communications professionals.

“You get to see the nuts and bolts of everything that happens during a campaign, and you do it an environment that’s not necessarily controlled,” Sanchez-Hernandez said. “People are giving you feedback and there is stuff happening out in the world, and you have to learn to adjust to the campaign.”

“I have a better understanding of RPIE (research, planning, implementation and evaluation) and how much work it takes to implement a campaign,” Kwan said.

“Especially being the account executive for the class, I was overseeing all aspects of the campaign,” Harrison said. “It definitely made me a well-rounded strategic communications professional.”